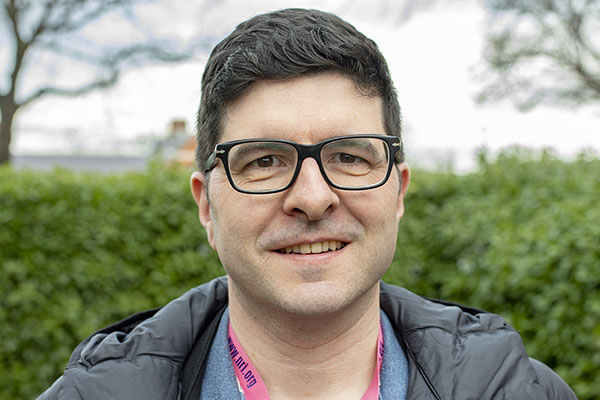 Dr. Marcos Paradelo Pérez joined University of Greenwich in 2020, moving from Rothamsted Research where he was working on the strategic programme ‘Soil to Nutrition’ focus on understanding microorganisms’ interactions with the soil structure under different soil managements.

After graduating with a BSc in Agricultural engineering and a MSc in Agriculture and Food Science and Technology from University of Vigo, Spain, Marcos obtained his PhD degree in 2012 at the same university. He used for the first time the colloid filtration theory to describe the transport and fate of colloidal pesticide formulations through soil that were widely used in Galician (NW Spain) vineyards.

From 2013 to 2018 he carried his postdoctoral research at the Department of Agroecology, Aarhus University, Denmark. He investigated how soil structure controls soil ecosystem functions, using X-ray CT scanning techniques to predict the movement of water, solutes and colloids through soil. He also studied the changes in soil microbial communities under different soil physical environments and anthropogenic factors. He found that the changes in bacterial communities after herbicide applications is mitigated in soils with higher soil organic matter.

Marcos is always looking for the newest techniques applied to soil science. Together with other colleagues, he has used medical and industrial scanners and other visualization techniques to describe soil architecture, vis-NIR spectroscopy and multivariate models to estimate the partition coefficient of different chemicals in soil and he has got some experienced analysing metagenomic data to describe soil microbial communities. He has helped to developed fast response tensiometers to measure pressure jumps in structured soil during drainage to link pore-scale fluctuations to macropore/core scale fluctuations. Being inspired by frugal technology, he has used inexpensive colloidal tracers (sepia ink) to study colloidal transport in soil. Marcos is also very interested in crowdsourced / citizen science, being involved in testing a litter decomposition method using commercial tea bags.

In 2019 Marcos has been leading a project to create a new farmer-centric platform to monitor soil conditions and benchmark soil health. This project has been selected by ConceptionX, a programme for building deep tech startups from leading research labs and PhD programmes around the UK.

Marcos aims to improve and maintain soil health in a changing climate as it is the basis for Sustainable Agricultural Intensification. The main topics in which he is interested are:

Biophysical drivers of soil resilience in a changing climate (2019-2022)

Funded by the Independent Research Fund Denmark, in collaboration with Aarhus University and Rothamsted Research.

Soil resilience to accelerated climate change largely depends on soil organic carbon (SOC) and its impact on food and fibre production and other ecosystem services. The roles of soil microbial communities and soil physicochemical properties on SOC dynamics are often examined separately, leading to incomplete understanding of soil-microbe interactions. The BROSE project aims to integrate the soil microbiome and physicochemical properties to identify critical drivers of soil resilience and propose a methodology for restoring SOC-depleted soils. The project will utilize experimental sites from three geographical regions with gradients in climate, SOC, physicochemical properties, and differences in soil management. The sites will provide the necessary platform to develop experimental setups to identify i) soil habitats that drive soil resilience, ii) biophysical dynamics and SOC sequestration capacity, and iii) propose microbial inoculants that recover soil function in SOC-depleted soils.

Soil to Nutrition is predicated on the premise that identification of the key processes determining nutrient use efficiency, productivity and resilience across food production systems, from soil to landscape, will provide the key mechanistic indicators necessary to direct interventions for sustainable intensification of future farming systems at the field, farm and landscape scales.