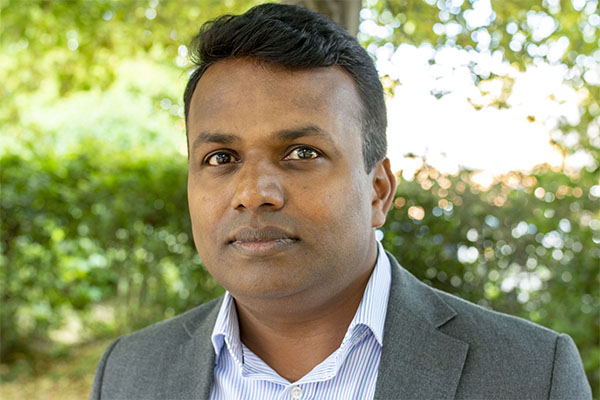 Professor Maruthi Gowda is a molecular plant virologist and vector entomologist with 20 years of research experience in plant-virus-insect interactions, especially those involving geminiviruses, potyviruses and their whitefly vector, Bemisia tabaci, infecting cassava, vegetables and other staple food crops in the tropics.

He began his research career in India in 1996 when he identified sources of resistance to the economically important tomato leaf curl disease. He then moved to the Natural Resources Institute at the University of Greenwich in 1998 to undertake PhD on cassava mosaic disease, which has caused devastating losses, famine and food shortages to subsistent farmers in Africa. Following completion of his PhD in 2001, Professor Gowda joined the university as a post-doctoral fellow. He was promoted to research fellow and subsequently senior research fellow.

Currently, as a Professor in Molecular Plant Pathology, Professor Gowda leads a core team of researchers (seven PhDs) investigating the reasons for the recent outbreak of cassava brown streak disease (CBSD) in the eastern and southern African region. He employs multi-disciplinary research, from field epidemiology to molecular biology and tissue culture to functional genomics, to better understand plant-virus-vector relationships and mechanisms of disease resistance to enable developing improved disease control strategies. He was the first to identify whitefly B. tabaci as the natural vector of cassava brown streak ipomoviruses (CBSIs). He has also developed robust low-cost diagnostic tests for CBSVs and cassava mosaic viruses, which are adapted in several African laboratories.

Through a Bill and Melinda Gates Foundation funded multi-partner project (5CP, 2012–16), Professor Gowda developed a highly sensitive virus-indexing programme for cleaning virus-infected cassava landraces and contributed to the conservation of germplasm. Through the Grand Challenges Explorations grant (2011–13), also from the Gates Foundation to work on an innovative idea for controlling whiteflies using endosymbiotic bacteria. He is an integral member of two African cassava whitefly projects (ACWP phase I 2014-2018; ACWP phase II 2012-2022). Other sources of funding for his research came from European Union (CassavaGMarkets project, 2012–16), African Union (LimitCBSD project, 2012–15, and DualCassava 2018-2021) and other sources.

He is an active member in the plant virology community, both in the UK and overseas. In the UK, he was a member and chair of the Plant Virology Committee of the Association of Applied Biologists and co-hosted the 2007 and 2016 AAB symposia ‘Advances in Plant Virology’ at the University of Greenwich.

Professor Gowda is passionate about using advanced molecular technologies to mitigate pest and disease problems in the tropics, especially those of cassava in Africa. He is currently interested in gaining greater understanding of cassava brown streak disease, which is epidemic in eastern Africa, its negative effects on the poor and devising ways to control the disease. He is working to identify natural sources of resistance to viruses and their insect vectors using high throughput sequencing (RNA-Seq) to identify, characterise, map and understand the mechanism of resistance genes with the aim of developing durable resistance to the disease.

Another complementary and exciting area of his research includes using endosymbiotic bacteria as bio-control agent against whitefly, the vector of cassava viruses. Professor Gowda’s team is identifying certain strains of bacteria that can reduce reproduction and increase mortality of whiteflies. If successful, this self-perpetuating bio-control strategy is expected to reduce cassava whitefly numbers significantly, which has great potential to achieve marked decrease in cassava disease incidences. The knowledge generated can also contribute to the greater understanding of how vector-borne diseases affect human beings.

Professor Gowda’s aim is to take holistic approaches to find solutions for cassava pest and disease problems for increased food security of the poor in eastern Africa.

This highly innovative Gates Foundation-funded project to control the agricultural pest whiteflies using endosymbiotic bacteria called Wolbachia was led by Professor Gowda. This was a pilot project which ran for 18 months, but Phase II was not funded. Research, however, continued on this interesting topic through a University of Greenwich PhD studentship. Wolbachia infects over 75% of the earth's insect population, and are shown to negatively affect the lifecycles of certain insect species and can also reduce pathogen transmission by them. Certain strains of Wolbachia are therefore used as potential bio-control agents for controlling diseases of medical importance (eg. dengue viruses) transmitted by mosquitoes. Since whiteflies are naturally infected with Wolbachia, the researchers are investigating whether a similar strategy can be employed to reduce the high whitefly populations on cassava in Africa. If successful, this strategy has huge potential for controlling whiteflies and the viruses they transmit since it comes at no-cost to the farmers, is self-perpetuating and can be implemented together with existing control strategies. For this reason, it can be part of an IPM package for the sustainable control of both whiteflies and virus diseases. The most exciting aspect of this research, apart from controlling cassava virus diseases, is the generation of fundamental knowledge that can contribute to better understanding of vector-transmitted pathogens of medical importance. Total value of the project USD 100K.

Professor Gowda is leading this African Union-funded multi-partner project to mitigate the impact of CBSD in Kenya, Tanzania and Malawi. The main aim of the project is to better understand the recent disease outbreaks in east Africa and devise effective control strategies. The researchers will first carry out socio-economic research to understand the impact of the disease on the poor, in particular on woman farmers who are the main workforce for cassava cultivation. They will then screen new cassava lines for viruses to identify resistant varieties and use state-of-the-art next generation sequencing for identifying genes that are contributing to resistance. This information will be used for developing disease resistance molecular markers for integration into breeding programmes. The successful implementation of this project will significantly improve the capacity of local partners in controlling the disease. Total value of the project Euros 620K.

Professor Gowda is a partner in this multi-partner project, led by IITA and funded by the Gates Foundation. The project, implemented in five eastern African countries, aims to identify CBSD resistance in 25 elite cassava lines in five target countries and develop a commercial seed system for cassava. Professor Gowda's role is to develop a virus indexing programme for cleaning 25 lines from virus infection using a combination of tissue culture, thermotherapy and chemotherapy, and virus diagnosis. As part of this project, the researchers have successfully developed a virus indexing programme for the African cassava viruses and so far cured over 40 cassava lines from virus infections. Methodologies developed at NRI have wider applications beyond the scope of 5CP as they will contribute in preventing virus-susceptible cassava varieties from extinction and the spread of virus-infected plants to new regions. The NRI component of this project is successfully delivered now. NRI contract value in the project USD 222K.

This multi partner project, led by NRI, funded by the European Commission is aiming to improving the livelihoods of smallholder cassava farmers through better access to growth markets (CassavaGmarkets). Dr Gowda is leading one of the seven work packages of this project, to better understand the epidemiology of CBSD in the disease endemic areas of southern Tanzania. Research will be carried out to identify disease resistant varieties for this region and the next generation sequencing will be used for identifying CBSD resistant genes. Total value of the project Euros 3.5 million.

Professor Gowda is a Co-PI in this PEARL project led by the Kebbi State University of Science and Technology in Nigeria. Main aim of the project is to build human and physical capacity through training and setting up a virus diagnostic laboratory that is capable of carrying out surveillance, diagnosis and characterization of viruses affecting cassava in northern Nigeria. University researchers, postgraduate students, extension workers and quarantine officers will be trained to identify cassava diseases in the field and also using diagnostic molecular techniques in the lab. Field surveys will be conducted in the nine states of the northern Nigeria to determine the prevalence of CMD including the recently introduced severe strain East African cassava mosaic virus-Uganda (EACMV-Ug) in the region. The EACMV-Ug resistance levels of Nigerian cassava varieties and local land races grown by farmers will be evaluated in field trials. As pre-emptive preparedness, the Nigerian cassava germplasm will be tested for resistance to another important viral disease, the cassava brown streak disease (CBSD) in East Africa through collaborations. CBSD is currently restricted to Eastern Africa but poses greatest threat to cassava production in West Africa through potential inadvertent introductions. Local quarantine officials will be trained and awareness will be created on the potential dangers of introducing CBSD to Nigeria. Added value of this proposal is to build capacity for cassava disease surveillance in northern Nigeria, an area that has long been neglected but equally important for food security and economic development of the farmers. The long term benefits of this investment can be to use the laboratory set up as a strategic point for disease surveillance in West Africa for cassava as well as other important food crops such as yams and legumes. NRI contract value £166K.

Professor Gowda is a Co-PI in this mega project http://cassavawhitefly.org/ led by NRI. He is contributing to three key areas of research and development; to identify natural sources of resistance to African cassava whitefly species in local and exotic cassava lines, and to investigate the role of endosymbionts on whitefly biology, virus transmission and population ecology to understand the phenomenon of whitefly super abundance in African countries.

This African Union-funded multi-partner project is similar to LimitCBSD project except the focus now is to mitigate the impact of CMD, CBSD and drought in subsistence farmers in Tanzania and Malawi. The researchers will first carry out socio-economic research to understand the impact of the two diseases and drought on the poor. They will then distribute drought-resistant virus-clean cassava varieties to farmers in drought-prone areas as a way of crop diversification to mitigate the impact of drought. They will also screen new cassava lines for viruses to identify most resistant varieties and use state-of-the-art next generation sequencing for identifying genes that are contributing to resistance. This information will be used for developing molecular markers for integration into breeding programmes. The successful implementation of this project will significantly improve the capacity of local partners in controlling both CMD and CBSD and minimize the impact of drought on farmers in drought-prone areas. Total value of the project USD1.2 million.

Head of the Plant Health research group. Responsible for the implementation and delivery of externally funded projects, supervising PhDs and MSc students and junior members of staff.