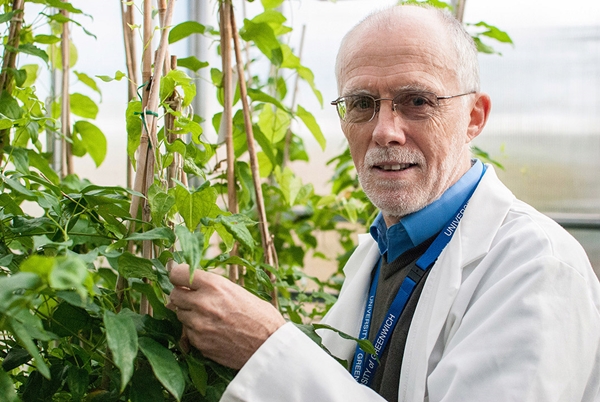 Professor Christopher Atkinson joined the University of Greenwich from East Malling Research in late 2012. Previously he worked for Unilever Research Ltd, Welwyn, and for the Agriculture Food Research Council at Rothamsted Research Station, in Harpenden (1971–76) as assistant (ASO) to the analyst. After obtaining advanced City & Guilds qualifications in analytical chemistry at Hatfield Polytechnic (now the University of Hertfordshire), he read for a degree in applied biology at London University (1976–79), followed by a PhD at UNCW Bangor (1982) with Professor J.F. Farrar in the department of J.L. Harper FRS. Professor Atkinson has held postdoctoral research positions in the Department of Forestry, University of Wales (1982–84) with M.P. Denne; Virginia Polytechnic Institute and State University, Virginia, USA (1984–87) with W.E. Winner; was a visiting scholar at Stanford University, California, USA (1984–87) working with H.A. Mooney; worked in the Department of Biological Sciences, Lancaster University, UK (1987–90) and, with a NERC Research Fellowship (1990–91), worked with T.A. Mansfield FRS and W.J. Davies CBE. He moved to Horticulture Research International (HRI), East Malling as a Senior Scientific Officer in Crop Physiology (1992), working with H.G. Jones. Professor Atkinson was promoted to Principle Research Scientist in the Perennial Quality and Biotechnology, East Malling (1997) and became an Executive Member of EMR's Science Management Team (2004–12) and Head of Science (2006–11) and then Deputy Chief Executive and Senior Programme Leader, resource use and sustainable production (2011–12) working with P.J. Gregory (CEO).

Currently, he is Emeritus Professor of Sustainable Agriculture and Climate Change, Natural Resources Institute, University of Greenwich. to present).

Professor Atkinson's research interests focus on understanding the impacts of environmental stress on the growth and development of crops, with particular expertise in perennial woody crops, such as apples and pears. His work includes studies of the influence of water on fruit growth and quality, and the impacts of chilling on flowering and cropping, and developing strategies to optimise production through understanding the processes which control fruit set and retention. The drought stress tolerance mechanisms of different crops, particularly those linked to the root behaviour of woody crops, have been extensively investigated.

He has also devoted time to promoting the understanding of science issues within the food production industry and with the general public.