Richard Lloyd Mills is an NRI PhD student who has just been awarded an £11,000 grant from the British Egg Marketing Board which will enable him to undertake further research into the genetic makeup of the Poultry Red Mite - a pest which affects chickens’ health and productivity. Richard took five minutes out of his day to Skype with Communications Officer Linden Kemkaran, about what inspired him to study this “tiny and annoyingly fast” little pest, and what the grant money means to his work.

My PhD is in chemical and molecular ecology and I research the Poultry Red Mite - a small blood-feeding external parasite that primarily infests chickens - I’m essentially trying to find new ways of controlling it. Previously I’ve worked on Zebra fish embryos and water-fleas and I was intrigued that there was not much information on poultry mites at all. People knew they represented a serious threat to the poultry industry, but no one really knew how to contain or control them reliably, so that was my main focus. I felt I could make a real impact in an area that was relatively under-researched.

One approach to control is through a classical chemical ecology solution where you identify the chemicals emitted by chickens that are attractive to mites, and design traps based around these chemical formulations. I wanted to try a novel approach focusing on chemosensory genes, identifying exactly what genes the mites use to sense and become attracted to chickens. If I can find the repertoire of genes that the mites are using to locate the chickens, new molecular based mite control methods can be developed. 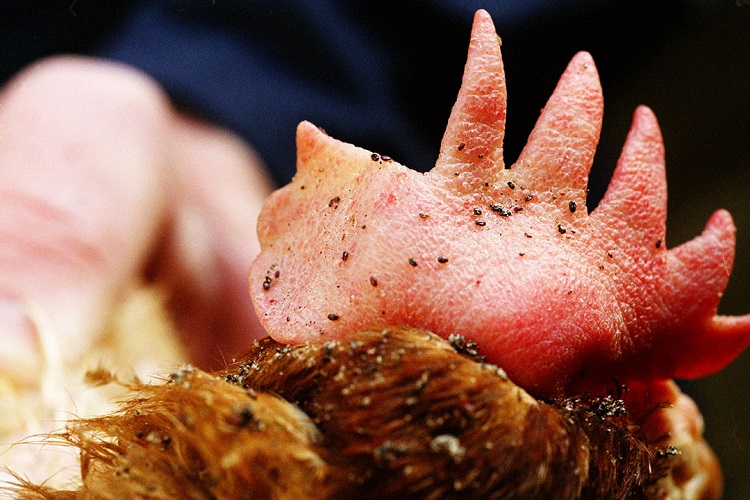 However, I did not have enough money in my PhD budget to complete this work. I discussed this with my NRI supervisors, Dr Dan Bray and Professor Richard Hopkins, and they suggested that I apply for a range of grants. They explained that it was rare to get the first one you apply for and I wasn’t very confident in applying as I knew I’d be up against other established researchers.

Fortunately, I was awarded the full amount. The actual process of applying wasn’t particularly complicated; I submitted a form which contained my research aims and objectives and put it before a review panel. I heard back from them pretty quickly – within a month. I think my application appealed to them as it was a collaboration with a group at the Moredun Research Institute in Scotland.

As humans, we have genes which enable us to smell things and it’s the same with mites. Basically, if you can disrupt the host-seeking process you can stop all sorts of damage, including economic impacts on farmers and health issues for the chickens themselves. One possibility is to knock down these chemosensory genes, potentially disrupting the host seeking process and preventing infestations.

You can elucidate what genes do by comparing them to similar genes in other closely related species, there’s not much research on poultry red mites but there’s more on ticks and spider-mites. In closely related species, gene structures can be pretty similar. Poultry mites are so tiny; the adults are just visible through the naked eye, but the larvae are minute. They’re really fast movers as well so it’s quite annoying when you try and do experiments with them as they’re running around all over the place!

A mite-infested chicken is not a happy bird. They get stressed and can die through anaemia in extreme cases. Even on the nicest free-range poultry farms, you can easily find tens-of-thousands of mites. At the moment, farmers predominantly use pesticides to try and control infestations but it’s not a permanent solution. The size of the mites allows them to persist in concealed crevices and they build pesticide resistance rather quickly.

My research offers a potential long-term solution for mite control and offers an alternative to the over-reliance on pesticides. If we can disrupt this fundamental mechanism that they’ve relied on for millions of years, it’s not going to end well for the mites. I’ve always been interested in how things work at a fundamental level and I love finding out things that no one else knows. I could have directed that curiosity towards anything really, but my early love of biology just kept on growing.

The key thing about a PhD which a lot of people seem to forget is that it’s a training degree or programme, we’re being trained for a possible future career. We’re not full-blown academics just yet. Studying at NRI is great as there’s a good level of integration between students and staff and all my supervisors are top scientists and well-renowned in the scientific world. Getting a grant for my PhD work is quite unusual; I don’t think many students receive grants. It’s enough money to get me through and I’m really excited to see how my research unfolds.