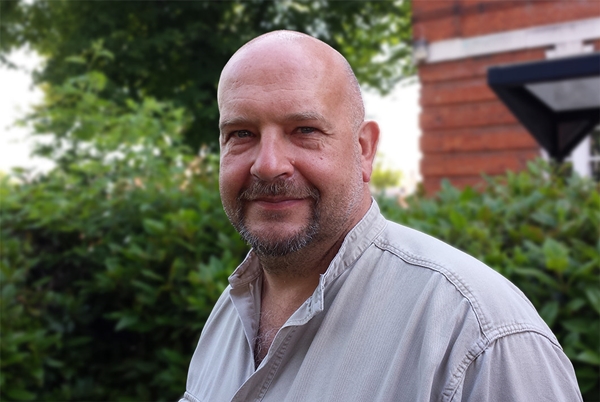 Richard Hopkins joined NRI in the spring of 2014, moving from the Ecology Department of the Swedish University of Agricultural Sciences.

Richard previously read Agricultural Zoology at the University of Leeds, before going on to complete a PhD on host plant resistance to cabbage and turnip root flies, Delia radicum and Delia floralis, at the University of Edinburgh and SCRI (now The Hutton Institute) in 1994. He then briefly spent a period teaching at Napier University in Edinburgh before moving to Sweden in 1995.

Richard’s work on Crucifer-insect interactions has combined work on host plant selection by crop pests with work on induced changes that take place in plants following insect damage. Work on insect egg load dynamics challenged the accepted paradigm that insects reduce egg production in the absence of preferred host plants. His review of the insect-glucosinolate system produced together with Joop van Loon and Nicole van Damm is the accepted text for the subject area. He continues to work on root flies together with colleagues in Scotland.

Richard Hopkins leads research on habitat selection and egg laying site selection by mosquitoes. This work includes a string of collaborations with Prof Rickard Ignell at SLU Alnarp on the behaviour and oviposition site selection of malaria mosquitoes. In addition to this he has collaborations with The Swedish National Veterinary laboratories working on the distribution of mosquitoes in Sweden. Prof Hopkins leads a collaborative study with FIOCRUZ in Brazil on the oviposition behaviour of Aedes aegypti, the primary vector of several virus diseases including Dengue Fever and Zika.

In addition to his research work, Prof Hopkins leads teaching and scientific exchange with Hunan University of Agricultural Sciences and is Head of Department for the Agriculture, Environment and Health Department at NRI. Richard Hopkins is a Fellow of The Royal Entomological Society, and an Honorary Professor at Universidad de Chile.

Richard Hopkins retains a broad interest in insect behaviour, and works over the different scales at which insects make decisions whilst finding their hosts, resting sites and egg laying sites. This work encompasses the selection of plants within and between patches for pests of field crops, through to the selection of water bodies for egg laying by mosquitoes.

Insects make decisions about egg laying sites over increasingly fine spatial scales, starting with the selection of habitats, and ending with the choice to lay eggs, and if so how many. Over these finer spatial scales, the insects make use of an array of sensory modalities, with odour and visual cues being more dominant at distance, and contact chemoreceptors only playing a part in the final stages. The relative impact of the different senses over the process of selecting an egg laying site provides a rich area of research into questions that are important for the health of crops, livestock and people. Work on insect behaviour contributes to developing IPM (Integrated Pest Management) and IVM (Integrated Vector Management) strategies where a holistic view of the lifecycle and behaviour of the insect can link to make a sustainable strategy.

A joint project between NRI and Fundação Oswaldo Cruz (Oswaldo Cruz Foundation, known as FIOCRUZ) in Rio de Janeiro, led by Richard Hopkins and Dr Luciano A Moreira. Aedes aegypti is responsible for transmitting dengue, the world's fastest-growing mosquito-borne disease, and other deadly diseases such as yellow fever, Zika and chikungunya. Ae. aegypti are very widespread and can be found in tropical and subtropical zones across the world and are highly adapted to living with or near humans. This NRI-led project aims to understand better the movement patterns and egg-laying sites of Ae. aegypti, to find out exactly how they go about ‘house-hunting’ and what factors make a good ‘nursery’ for their young. This understanding will inform future development of targeted traps or repellents to reduce the incidence of people getting bitten by this mosquito and minimise the risk of being infected by dengue, Zika or other dangerous diseases.

Funded by the UK’s Medical Research Council, the project comes under the umbrella of ‘research on neglected tropical diseases’; with growing international concern over the spread of the hitherto little-known Zika virus, the importance of understanding more about Ae. aegypti has never been more urgent.

Ryegrass as a reservoir for Wheat dwarf virus in Sweden

Viruses are important pathogens, which cause extensive yield losses to a wide range of crops. To reduce their impact, it is necessary to understand how the virus is transmitted to the plant. Wheat dwarf disease is caused by Wheat dwarf virus (WDV), a geminivirus of the genus Mastrevirus which is transmitted persistently by the leafhopper Psammotetix alienus. WDV only periodically affects wheat, so the virus must persist somewhere. The periodic re-appearance has been found to be associated with changes in agricultural practices. Due to a warmer climate that prolongs the vector survival, there is a great risk in Sweden that the WDV infections in winter wheat will be more extensive than previously. The distribution of the virus is also increasing in Europe, Asia and Africa, and recent studies have shown that grasses growing in connection to WDV-affected wheat fields can be infected. Even a low rate of infection in grasses, such as ryegrasses, can have an impact on the epidemiology of the virus. Ryegrasses may play a role as a reservoir that can be a potential source of acquiring the virus by leafhoppers for several years even when there is no wheat cultivation. Grasses from neighboring meadows, grass weeds in wheat fields and Triticale have been shown to harbor low level infections of WDV. In Sweden, English ryegrass (Lolium perenne, a perennial grass), is used as a catch crop in wheat fields to reduce the nutrient leakage. The ryegrass can act as a reservoir and provide the leafhoppers with the virus that can cause infection in newly sown wheat the following autumn. In this project, we are identifying key factors for the epidemiology of WDV by recognition of virus sources to develop improved methods for virus detection and control. Field samples of different grasses (e.g., ryegrass) are being tested by ELISA to determine the incidence of WDV, and inoculation experiments using leafhoppers as vectors are investigating how good various plants are as hosts. Field samples are also being analyzed for viruses causing barley yellow dwarf (BYD).

The work is performed together with Elham Yazdkhast (a PhD student) and Anders Kvarnheden from Swedish University of Agricultural Sciences, Department of Plant Biology and Forest Genetics.

The mosquito fauna of Sweden

Based on the literature up to 2012, Sweden has 49 species of Culicid mosquitoes. However, knowledge of the distribution of the species is incomplete and in many cases rather dated. An extensive survey of the Swedish mosquito fauna was initiated in the summer of 2012, using crowdsourcing from owners of Mosquito Magnets™. It is primarily used by members of the public with mosquito nuisance problems, and about 15000 of these traps have been sold in Sweden. Volunteers from all around Sweden have sent a sample of mosquitoes trapped during one night/season (June-September) to us for determination. All over Sweden, people who own a trap have sent in mosquito samples from a 24 hour period during the month of July. Mosquito specimens have been identified from 117 samples sent in during 2012. In 2013, new sampling sites were included which brought the number of sites to nearly 200. Work is still ongoing, but so far 2 new species for Sweden have been confirmed. Knowledge of the distribution of vector species is considered particularly important, and the project is modelling the environmental factors that influence the distribution of individual species.

The work is performed together with Anders Lindström of The National Veterinary Institute in Sweden.

Ecology of Culex modestus in the UK

Climate change, increasing movement of people and goods around the world and changes in urban and rural landscapes have led to changes in the distribution of insect-borne diseases around the world. The Medway estuary is a major stopping-off point for birds that migrate between Europe and Africa, and it has also recently been colonised by Culex modestus, a mosquito that is known to transmit a range of pathogens from birds to humans and horses in the Mediterranean area.

The characterisation of the breeding habitats and host preferences of this invasive mosquito, capable of transmitting a life-threatening virus to humans and horses, is considered a high priority. The long-term aim of this work is to contribute to European mosquito control strategies in the Medway, elsewhere in the UK and on a wider scale.

The project is linking environmental information associated with the presence of this species, monitoring the main mosquito population density and species diversity in strategic areas and contributing to model-building in collaboration with colleagues to forecast areas most suitable for sustaining populations of C. modestus.

The project is led by Gabriella Gibson of NRI, and linked to Jolyon Medlock, Public Health England.