What are Wetlands Worth?

When we see a vast area of flooded, marshy land, do we ever stop and think about what it’s worth? Probably not, largely because wetland benefits are not directly bought or sold in financial markets so may not be properly identified. However, wetlands are highly complex ecosystems that can provide a huge range of benefits to people, the environment, and the economy. Making these multiple benefits visible has been the challenge of a week-long exhibition by WetlandLIFE, a project led by the University of Greenwich with staff from the School of Humanities and Social Sciences and NRI, together with other academic partners. 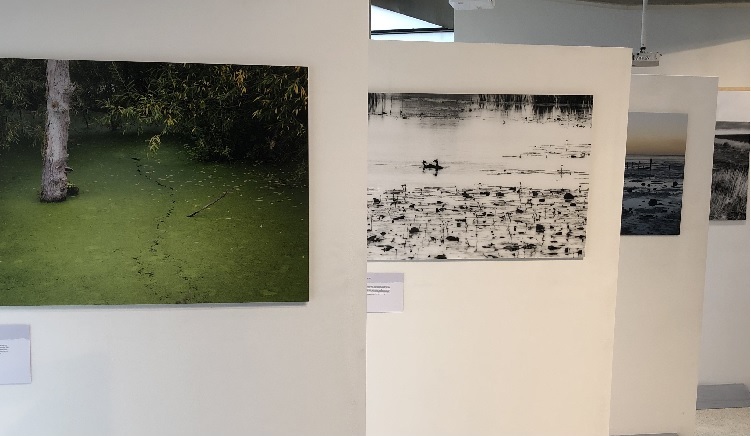 To celebrate World Wetlands Day, which fell this year on Sunday 2nd February, the exhibition, “Reclaiming Wetland Values: Marsh, Mud and Wonder”, took on the important task of explaining the real value of the United Kingdom’s wetlands and why we should cherish them. The WetlandLIFE team, in conjunction with fellow ‘Valuing Nature’ project CoastWEB, curated the exhibition at the Royal Geographic Society in London, to show how the different and complex values of wetlands can be revealed through art, history, natural and social science, economics and creative writing.

Dr Tim Acott, Reader in Human Geography at the University of Greenwich, has spent years taking photographs of various wetland landscapes around the country, many of 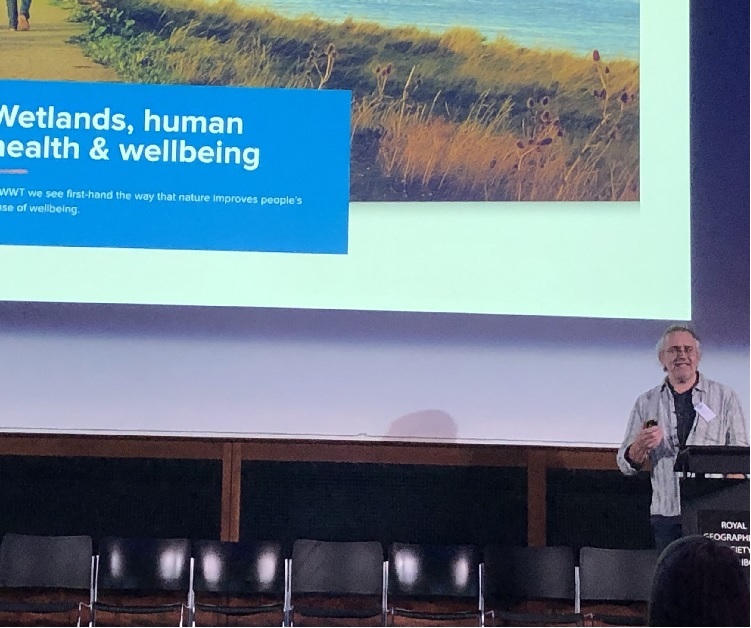 which were on display and formed a central corridor in the exhibition. Dr Acott and colleague Dr Adriana Ford also used video to capture the stories of people who live and work in and around wetland environments. Focusing on three case study sites, Bedford Priory Country Park, Alkborough Flats and the Avalon Marshes, they used the Community Voice Method to film over forty local people, talking about their views on the health and wellbeing benefits of wetlands. The perceived ‘downsides’ such as being bitten by mosquitoes were also recorded. The resulting community documentaries were aired throughout the duration of the week-long exhibition.

Dr Acott says about his photography and videos that “this project captured my experience of wetlands and hopefully something of the inspiring, haunting and reflective qualities I encountered there.” He goes on: “the exhibition showcases the results of a multi-disciplinary, three-year project that has worked alongside Public Health England to emphasise the benefits of our wetland habitats by using valuation data within an ecosystem framework.” 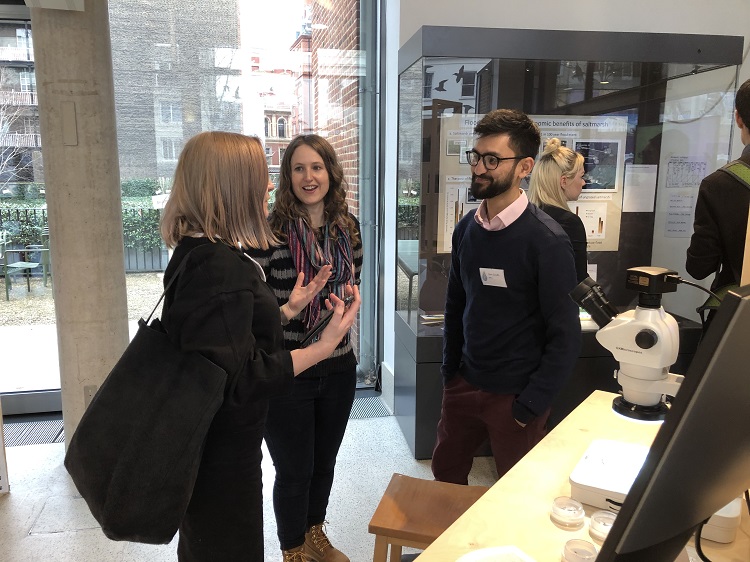 A key aspect of WetlandLIFE is to think about mosquitoes and wetlands. NRI’s Dr Frances Hawkes, a Senior Research Fellow and mosquito expert, says this issue can often be misrepresented: “mosquitoes are an incredibly important part of wetland diversity. They are a valuable part of the food chain, as prey that supports many other species of insects, birds, bats and amphibians. An important outcome of our research is providing ecological knowledge that can empower wetland managers in both understanding where mosquitoes fit into healthy, diverse wetlands, and in demonstrating this to the public.”

There are 36 different species of mosquitoes present in the UK, many of these rarely, if ever, bite humans. Project collaborator Dr Jolyon Medlock from Public Health England (PHE) explained how mosquitoes fit within a food web, and that they are hounded at every stage of their lives by predators. “They’re an important part of the eco-system; the problem,” he explained, “occurs when you get a boom and bust of flooding and then drought in a wetland environment, that’s when mosquito numbers can increase. If an area is constantly wet, then the natural predators will effectively control mosquito numbers.”

Nonetheless, PHE remains vigilant and it is always on the lookout for signs of invasive mosquitoes and mosquito-borne viruses in the UK. Dr Medlock described how his team spends a great deal of the summer working with ports, motorway service stops and distribution warehouses looking for signs that disease-carrying mosquitoes may have been carried into the country. “Crucially”, he says, “these non-native mosquitoes are not associated with wetlands, rather they have been shown to breed in more urban environments. PHE conducts ongoing mosquito surveillance, we run traps across the country and receive boxes of specimens every two weeks. While there’s currently no threat to the public, we’re well positioned to respond quickly should that change.”

Meanwhile, the power of the written word in relation to wetlands was brought to life by Victoria H. Leslie, a folklore and English literature academic and author. Victoria set up 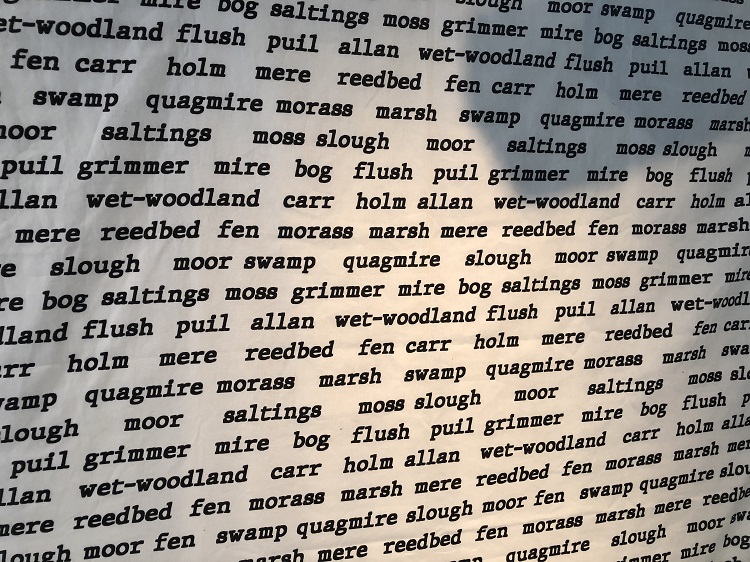 the ‘Hide and Seek’ project, encouraging members of the public to enter bird-watching hides and jot down their thoughts. She explained: “we created two different zones inside the hides, a Memory Hide and a Creativity Hide. We provided creative writing prompts and folktales of the area, such as rich traditions of wassailing and other wonderful customs. During this project I met people who listened to audio books in the landscape and they said it was the perfect environment for that. I tried to facilitate a space where people could deposit their own stories as well.”

Victoria provided postcards for visitors to write down their own short stories, poems, ideas and feelings and said people started to share their own memories of the wetland landscape: “one lady wrote about how her grandfathers both worked in the peat industry; others just wandered in to escape the weather but ended up using the hides as a wonderful place to sit, think and create.”

Victoria describes the hides as “sanctuaries in the landscape” that provide an “egalitarian space, democratic and non-judgmental so that everyone can contribute their thoughts.”

And if you can’t make it to a wetland then do not worry, the wetland can come to you. 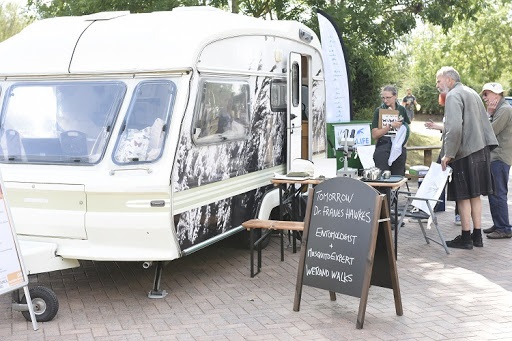 The Wetlands on Wheels (WoW) project takes the form of a small caravan that travels around and spreads the word. Describing itself as “part laboratory, part exhibition” the WoW vintage caravan is driven by WetlandLIFE artists Kerry Morrison and Helmut Lemke and is a great place to learn about how amazing wetland habitats are and all about the insects and animals that live there: ‘From mosquitoes, to cormorants – see wildlife from a totally different perspective – through sound art, sketches and science.’ The WoW caravan has been in situ on the Alkborough Flats, coastal wetlands on the Humber estuary, and joined visitors in London via a live link throughout the exhibition, sharing music, conversation, and art inspired by the wetlands.

Mosquito and Me: a narrative on mosquitoes in English wetlands in 2018