The tree against hunger: exploring genetic diversity and local adaptation of enset, the ‘false banana’ 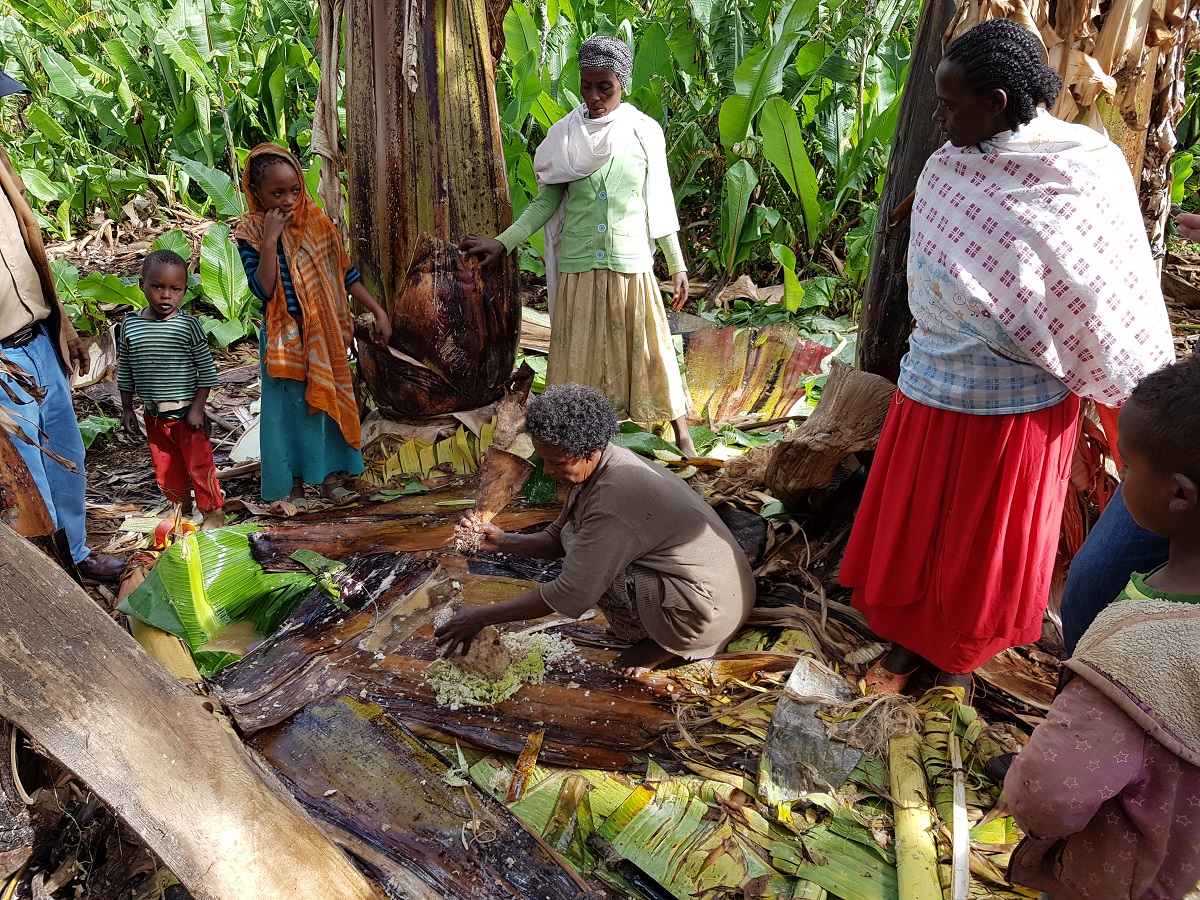 Enset (Ensete ventricosum) is the less well-known relative of one of the world’s most popular fruits, the banana (Musa sp.). According to the FAO, every year 114 million tonnes of bananas are grown on approximately 5.6 million hectares of land in 135 countries. In contrast, and despite growing wild across much of East and Southern Africa, enset has only ever been domesticated and cultivated in one small region of southern Ethiopia, where it is a main staple. Cultivated for its corm (fleshy underground stem) and pseudostem (trunk), rather than for its fruit which is inedible, enset is sometimes called the ‘false banana’, though a more fitting moniker would be ‘the tree against hunger’ as it has exceptionally high productivity and the ability to buffer seasonal food deficit.

A two-year project aims to enhance food security in Ethiopia by investigating the genetic diversity and local adaptation of enset and nine associated crops and trees, together with productivity and soil fertility. Supported by the Global Challenges Research Fund (GCRF), the project is led by Royal Botanic Gardens, Kew, with partners NRI and Queen Mary University in the UK, and Ethiopia’s Hawassa University, Addis Ababa University and Ethiopian Biodiversity Institute. The project aims to better understand the genetic diversity of enset and associated crops, and their local adaptation patterns, in order to guide farmers in the choice of optimal varieties for their current soil and climatic conditions. The project is also concerned with future distributions of varieties, linked to potential changes in habitat suitability according to future climate projections.

During the project’s first year, partners collected more than one thousand soil and leaf samples of all project crops, in eight different altitudinal transects in southern Ethiopia. In the second year, the team will extract DNA from the leaf samples and carry out analyses to detect local adaptation patterns across the altitudinal gradients. This will allow the team to tailor advice to farmers on varietal choice. The soil samples will be analysed for carbon and nutrient concentration, to assess the fertility and sustainability of the different crops. In situ measurements to assess crop productivity and aboveground carbon storage will complement the soil measurements to evaluate the potential for carbon sequestration of the different crops and systems. Such analyses will guide advice to farmers on best practices for sustainable agriculture.

By improving understanding of the crops’ genetic diversity, local adaption, productivity and soil fertility, this project aims to understand how changes in the agri-systems can affect the sustainability of agriculture in southern Ethiopia, and whether enset can harness its great potential for food security – ultimately living up to its name ‘the tree against hunger’.