On World Malaria Day 2019, NRI is announcing a new research project which is to study the behaviour of the planet’s most dangerous animal – the mosquito – the world’s biggest, smallest killer. Mosquitoes kill over 700,000 people every year and make millions seriously ill; malaria alone, transmitted by the Anopheles mosquito, kills over 400,000 people every year.

NRI’s Professor Gabriella Gibson and researcher Dr Lionel Feugère beat stiff global competition to win a significant research grant for their project: 'Decoding the biomechanics of flight – tone-based acoustic communication in mosquitoes'. The international awarding body, the Human Frontiers of Science Program (HFSP), considered over 800 applications from 60 countries before selecting just 34 winners, of which NRI was one. 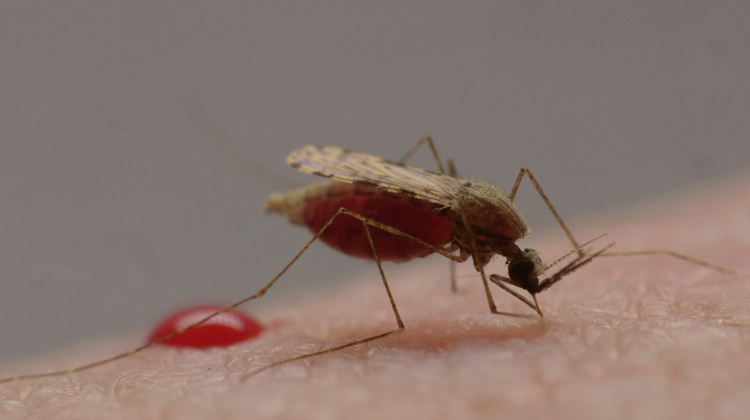 HFSP judges were looking for “innovative and creative potential” within the research teams, and Gibson and Feugère’s research into how mosquitoes communicate through sound prior to mating, certainly ticked all the boxes. More than half the world’s population lives alongside disease-carrying mosquitoes and a single bite is all it takes to contract malaria, Zika, dengue, chikungunya or yellow fever. It is now widely acknowledged that the more we understand about how mosquitoes behave and breed, the greater chance we have of preventing disease.

NRI’s Professor Gibson, a medical entomologist, has been fascinated by mosquitoes for most of her working life, and teaming up with Lionel Feugère, whose background is in sound technology and acoustics, has allowed her to make huge strides into the scientific research of how mosquitoes communicate through sound.

Professor Gibson explains, “I have been fascinated for a long time by that irritating sound mosquitoes make when they fly; why would they want to announce their presence?! So far, our research has shown that male and female mosquitoes communicate by listening to the flight tones of each other. They both adjust to the other, to find out if they are compatible mates or not; they kind of tune in to each other.”

But how do they manage such complex interactions in mid-flight at high speed? This new project will investigate the mechanics and energy expenditure of ‘duetting’. Gibson and Feugère will work closely with Professor Rajat Mittal, at the John Hopkins University School of Medicine, USA, who is leading this project, and whose work focuses on developing computational methods to analyse mechanics and acoustics. Together they plan to show how mosquitoes undertake this energy consuming feat, identify what they gain by doing so, and find a way to use sound to literally “catch them out”!

Gibson’s laboratory is sound-proofed and has 3D video capability with simultaneous sound recording to observe how mosquitoes fly and find each other. Precise measurements of activity, wingbeat frequency, speed and direction of flight are taken from these recordings and sent to Mittal and his team so he can test biomechanical models of wing flapping.

Professor Gibson says, “There’s no-one else at present who has the facilities to do these recordings. Our lab was designed to provide ‘semi-natural field conditions,’ which means we can study mosquito behaviour in great detail in the laboratory to understand what we learn from our field studies of mosquito behaviour in Africa and how we can use this knowledge to eliminate the diseases they are responsible for.”

So far, the simplest way of preventing bites to humans and reducing mosquito-borne diseases is to sleep under a bed net that has been impregnated with a safe insecticide, but the message doesn’t always get through.

“It took 15 years or more for the world to believe this”, Professor Gibson says of the bed net, “they thought – no it’s too simple, there are always holes in bed nets, it’s too expensive, who’s going to provide them? Since the idea caught on, bed nets halved the number of malaria cases around the world; however, the emergence of insecticide resistance means that we have to continue to develop novel ways of reducing mosquito-borne diseases.”

Gibson goes on, “Mosquitoes vary hugely between species; some species are much more dangerous than others. Most mosquitoes never come near a human, and those that do are mostly just annoying. In fact, all mosquitoes are beneficial in some way; for example, fish and birds thrive on them!” Professor Gibson’s research is focused on the disease-carrying species and she firmly believes that knowledge is power when it comes to finding different ways of controlling them effectively.

“Everything I’ve done has been based on understanding mosquito sensory systems, because knowing what they hear, smell, see, or land on, gives us a clue as to how to manipulate these behaviours by using specific sound, odours or landing surfaces to attract mosquitoes into traps. However, trying to eradicate all mosquitoes completely is simply not an option; they play such an important role in the functioning of delicately-balanced ecosystems.”

The funding offered by the HFSP grant will allow Gibson and Feugère to continue their research partnership for another three years, “This is extremely important,” Professor Gibson explains, "Lionel’s background in the technology and maths behind sound production and detection has enhanced our ability to analyse the limits of mosquito sound communication far beyond my earlier observations of the role of sound in mosquito mating behaviour.”

Professor Gibson’s fascination with understanding these tiny, but deadly creatures is such that, should a mosquito happen to land on her arm while on holiday, she will pause to study it, turning it this way and that, to work out which species it is and where it might have come from. Then she kills it, of course, just like the rest of us would.

It’s a myth that the larger the mosquito, the more severe the bite; the tiny ones can be troublesome, too. All mosquitoes shoot a little pool of anti-coagulant under the skin so that the blood won’t clot. Professor Gibson says she was “blown away” when she discovered that every species of mosquito has a different chemical in its anti-coagulant, “They haven’t inherited it from a single trait, they all have a different chemical that does the same thing. When we swell up badly after a bite, it means we’re more allergic to that particular chemical.”

Lionel Feugère outlines the eventual aim of the project, “The final phase of the study would be to invent a mosquito trap or a means of disturbing swarms during their mating rituals.”

There’s still so much to learn about this tiny, but powerful creature. As the Dalai Lama said, “if you think you are too small to make a difference, try sleeping with a mosquito”.