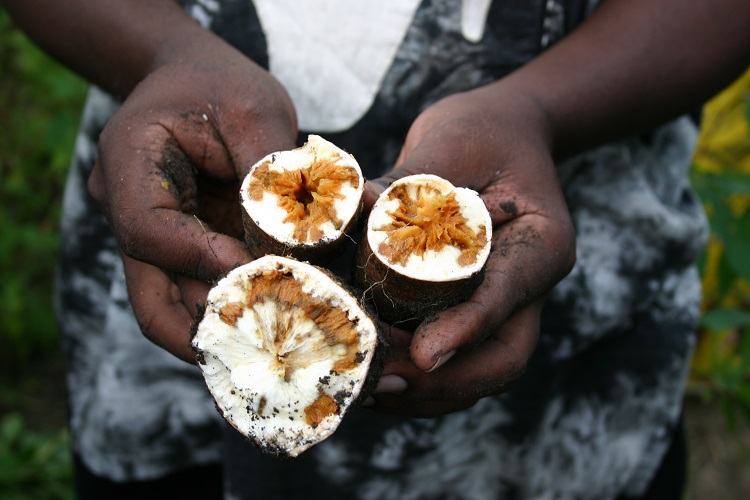 Siji Kavil, PhD student at NRI, is serious about cassava brown streak disease (CBSD). That’s because it’s a serious disease affecting cassava, the tropical root that is an important crop for food and nutrition security in many parts of the developing world. CBSD causes cassava roots to rot, displaying unsightly brown streaks and making them unfit for consumption or industrial use. During the past decade, CBSD has affected over 200 million smallholder farmers in east and central Africa, where it causes annual losses of over US $700 million. This is devastating for the farming families who rely on cassava for their daily food and income.

Siji is studying cassava at a molecular level, in order to understand which genes are responsible for resistance to CBSD. The ultimate goal of this work is to give plant breeders better tools to take advantage of cassava’s natural resistance to the disease. This year, Siji won a Gold sponsorship with top biotech company, Primerdesign, based in Southampton, UK, giving her hands-on training, technical support and specialised equipment. 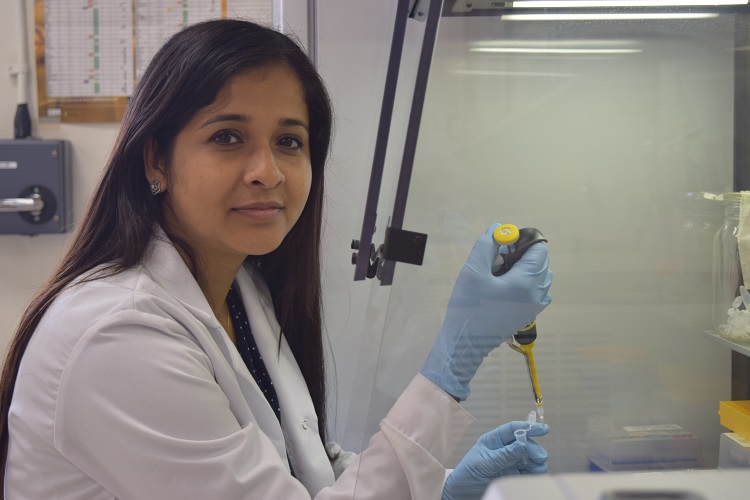 The Primerdesign sponsorship is exclusively for students working in molecular biology – the branch of biology that deals with molecular composition and interactions at the cellular level. Siji is looking at cassava’s DNA – the molecule that contains an organism’s genetic information or ‘instruction book’ – specifically searching for potential genes that contribute to making cassava resistant to CBSD. To do this, she’s carrying out ‘expression studies’ which includes comparing over 30,000 genes of cassava varieties with varying degrees of resistance to the disease.

Once specific DNA fragments are associated with disease resistance, they are used as ‘markers’ and are given to plant breeders to help in their efforts to produce disease-resistant varieties. This form of plant breeding builds on the method of crossing plants with specific characteristics, practiced since the dawn of agriculture – but instead of observing a plant’s characteristics with the naked eye, molecular biologists can study the plant’s genes. 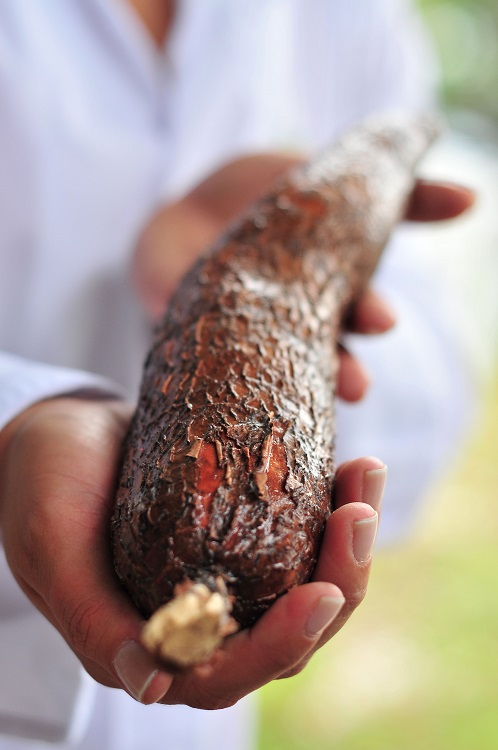 Expression studies are very time-consuming, and so specialised molecular biology techniques are needed. Siji’s sponsorship is for a technique related to ‘polymerase chain reaction’, or PCR, which is sometimes called ‘molecular photocopying’ as it’s used to make the thousands or millions of copies from small segments of DNA that are necessary for molecular analyses. The specific technique is called qPCR, where the ‘q’ signifies ‘quantitative’, meaning that the technique is used to measure the quantity of a specific fragment of DNA. “qPCR is very sensitive,” explains Siji, “and as such, it’s the best method for this type of studies. It saves time and accurately assesses any changes in gene expression.”

Siji’s sponsorship includes state-of-the-art tools and materials for the remainder of her project, access to a webinar series, and a hands-on training day at the Primerdesign lab in Southampton, which she undertook in May 2017 together with eight other winning students.

"The training day was excellent," says Siji, "the techniques and concepts were explained fully and I was able to ask questions and clear up all my doubts. I have rectified my mistakes in the lab and when interpreting results, and I’m able to pass on this knowledge to my fellow students at NRI. The Primerdesign training has definitely made my life easier, and the team continues to answer my queries. I would recommend this sponsorship programme to any students working with qPCR."

Siji’s PhD supervisors at NRI, Dr Sophie Bouvaine and Prof. Maruthi Gouda, are positive that this sponsorship will help Siji gain valuable experience in modern diagnostic and DNA quantification technology and the molecular biology kits will help towards completing her experiments.

Back to her (cassava) roots 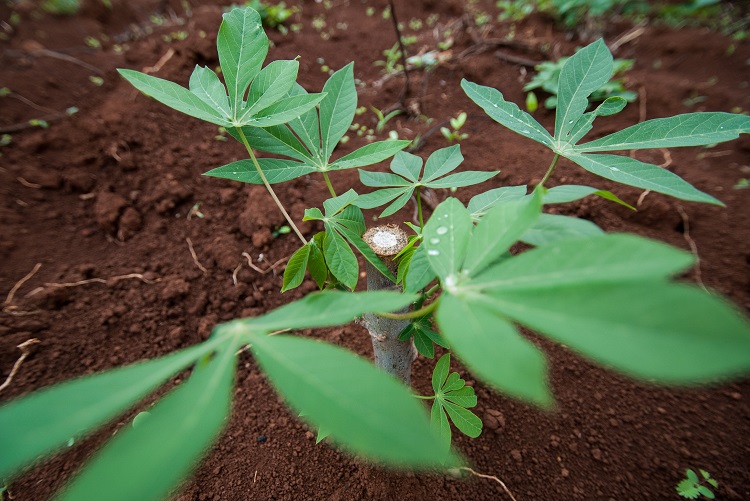 It is sometimes true that scientists spend their whole career examining plants that they have never seen growing in a field, or a crop they’ve never eaten. This is not the case for Siji. As a child, she would help out at home, planting cassava on the family plot in Pathanamthitta, Kerala, southern India, where her father was a farmer.

“Cassava is called ‘Kappa’ in our language, Malayalam,” explains Siji. “Cassava mash is one of the main dishes in our diet. After peeling and cutting the cassava into large cubes, we cook it with basic Indian spices and grated coconut. Mashed cassava paired with meat or fish curry is a popular combination.” 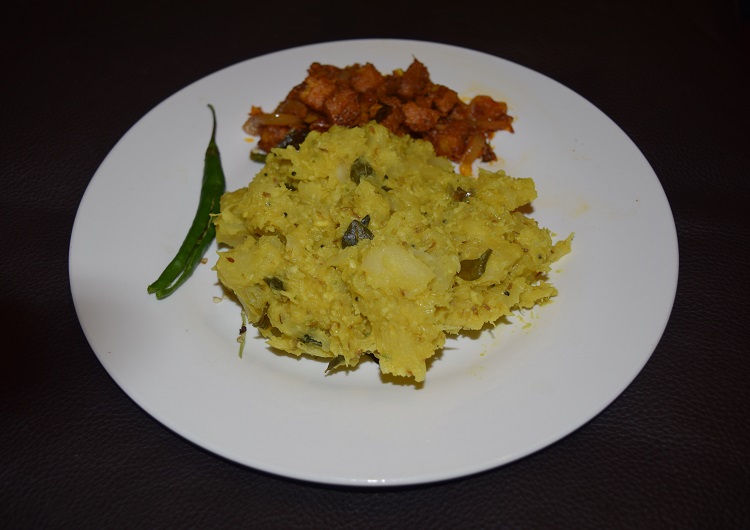 Although Siji went to school in the city, her rural roots were always present. Fascinated by science in general and then by biotechnology in particular, her scientific mission is focussed on helping farmers – a fitting memorial to her late father’s legacy. “Science is only one way to improve agriculture,” she says, “but it’s the best way that I can help. We can’t live without food.” She studied Biotechnology at BSc and MSc level, before taking up a role as Junior Research Fellow at the University of Agricultural Sciences, Dharwad (UASD) in the southern Indian state of Karnataka.

At UASD, she worked in the plant biotechnology department, mapping genes showing resistance to pests and diseases in species like pigeonpea and aubergine – important crops in India where many people are vegetarian. Both at UASD and during her BSc and MSc degrees, what really impressed Siji was the generation of new biotechnology tools and methods – and visits to biotech industries and companies always inspired her.

In her search for new challenges in plant biotechnology, a colleague recommended NRI to her. When a PhD studentship came up at NRI that matched her research profile, she applied, and earned her place on a project with a prestigious Vice Chancellor’s Scholarship. Siji began her PhD research at NRI in January 2016, focusing on analysing several resistant and susceptible cassava lines to understand CBSD-resistance pathways. Siji is processing over half a terabyte of cassava sequence data, meticulously managing data points for identifying potential genes contributing to virus resistance. 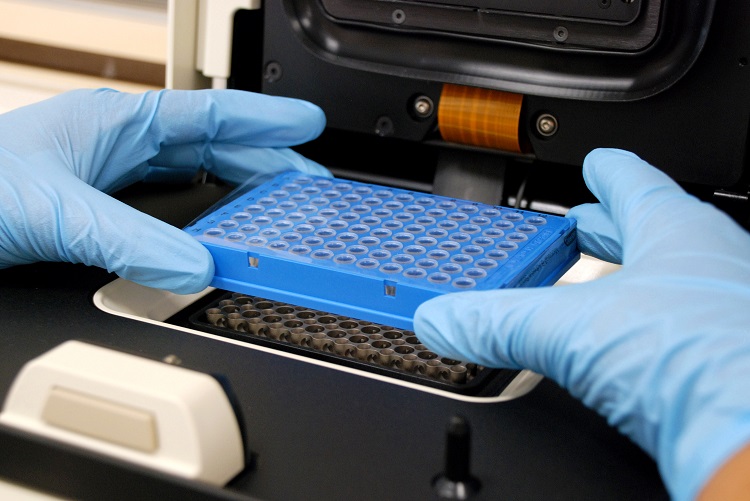 Siji was excited to win the gold sponsorship at Primerdesign – not only is this great for her CV, but she feels it gives her the opportunity to enhance her studies whilst contributing to lab costs. Her PhD as a whole is in line with NRI’s ethos of conducting applied science to ensure food security, support sustainable development and reduce poverty, especially as the ‘markers’ she develops can be used in cassava breeding programmes in Africa, to inform the production of disease-resistant varieties.

And the future? Once Siji has completed her PhD at NRI, she doesn’t just aspire to work in a biotech company – she wants to start one, most likely in her home country, where she sees her skills, background and vision are most needed.

Links: Study a PhD at NRI, University of Greenwich | Primerdesign |