NRI is at the forefront of a battle to beat losses of food crops after harvest, known specifically as ‘postharvest losses’. When food is lost after harvest, it also means wasted agricultural inputs such as seeds, water, land use, fertiliser, labour and transport that were invested in growing the food. In addition, any pollution or carbon dioxide released during the process will have been in vain. But what is the extent of this loss, and what can we do to reduce it?

Approximately one third of all food is lost or wasted. That’s a lot of food. But the ‘approximately’ is also a problem. If we are to combat loss and waste, we need to know precisely what and how much is being lost, and where, rather than representing losses by an ‘unknown quantity’ in the corner of a food balance sheet. Needless to say, tracing every grain, root or tuber produced from harvest to market, and measuring losses incurred at each stage is a complicated, resource-intensive challenge, so what we really need are appropriate estimates of the loss. These estimates need to be precise enough to be meaningful, based on a transparent, scientific methodology, and accepted by the scientific community. Such loss estimates are key to advising policy makers and designing interventions to reduce waste and increase food security. 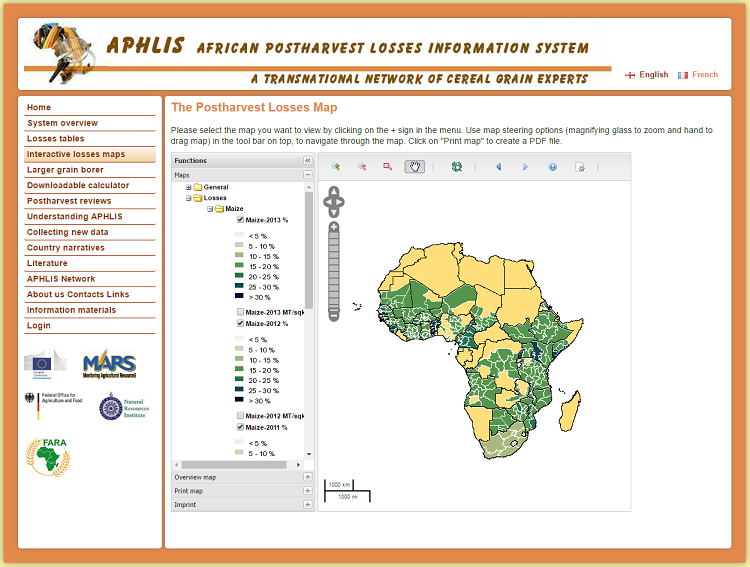 The African Postharvest Losses Information System or ‘APHLIS’ is a scientific model producing calculated estimates of postharvest losses of food crops across sub-Saharan Africa. It was developed in 2010 by NRI, the European Commission’s Joint Research Centre (JRC) and information specialists ISICAD (Information Systems for International Cooperation in Agricultural Research and Rural Development) and is based on the work and expertise of Rick Hodges, NRI’s Visiting Professor of Grain Postharvest Management.

APHLIS combines scientific data from literature on postharvest loss with local factors from a network of over 35 African postharvest experts to generate localised estimates of losses. Such local factors include weather conditions, pests, grain drying conditions and the length of farm storage periods, among others. The combined information is fed through an algorithm which produces percentages loss at each link of the value chain – for example, at harvest, during threshing or storage – and is modified according to the factors for localised estimates. All data is freely available on the APHLIS website, primarily as maps, where users can zoom in to details at a regional level, download the information as tables or pinpoint the specific scientific papers that were used to calculate the estimates.

The experts that make up the network also act as APHLIS champions; they are currently expanding their reach with a new and improved version of the information system, through a 5-year project called ‘APHLIS+’ (Aphlis plus). The core project team is led by NRI’s Bruno Tran, together with Tanya Stathers, Ben Bennett and Jan Priebe, Marc Bernard (AfricaRice), Felix Rembold (JRC), Brighton Mvumi (University of Zimbabwe), and Frank Sonntag and Rudolf Böck (AKM-Services).

APHLIS+ will build on the solid foundation of APHLIS by accessing more loss measurement data, improving the accuracy of estimation models, adding estimates of financial value and nutritional losses, providing interactive tools to access the data and underlying models, and ensuring open access to loss estimates, algorithms via the modelling tool and an application programming interface (API). The original APHLIS model concentrated on cereals: APHLIS+ will increase the crop varieties covered to include pulses, roots, tubers, bananas and plantains.