How acceptable is bread made with high quality cassava flour in Vietnam?

The Gratitude Project seeks to reduce physical losses of cassava, during postharvest and processing and to add value to the waste products produced.

Currently in Vietnam, cassava is used to produce starch on a significant scale, which generates a lot of waste. Also produced is a low-grade cassava flour that is manufactured from dried cassava chips and used for non-food applications. An alternative to these products, suggested by the Gratitude Project, is the production of High Quality Cassava Flour (HQCF) that produces less waste than the starch process and could also be used for food applications.

One of the products that can be made using HQCF as an ingredient is bread, a popular commodity in Vietnam.

Part of the research conducted for the Gratitude project looks at the consumer acceptance of bread made with HQCF as a partial substitute for wheat flour. At the School of Biotechnology and Food Technology, Hanoi University of Science and Technology (HUST), HQCF bread produced at a local bakery in Hanoi, Vietnam (Minh Dang), was tested by 145 local consumers. Preliminary results showed that the bread containing HQCF was almost equally as acceptable as the bread made with 100% wheat flour. 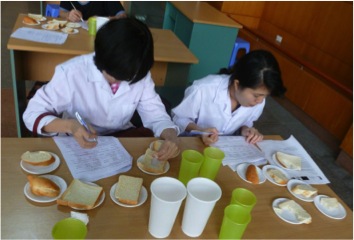 The results obtained from this study will be the basis for the School of Biotechnology and Food Technology at HUST to collaborate with manufacturers in cassava processing, with the goal of developing markets for HQCF.

Aurelie Bechoff, food technologist at NRI said "I have enjoyed working on this study and I hope that we can develop new products with locally grown cassava that can be beneficial to the Vietnamese economy."

Kim Anh To, the Vietnam country coordinator and a research package leader on the project, said "HQCF is made with the aim of diversifying cassava products for Vietnam cassava producers and improving income for cassava farmers. We can make bread using HQCF and we are seeking to understand the potential market for HQCF in Vietnam"