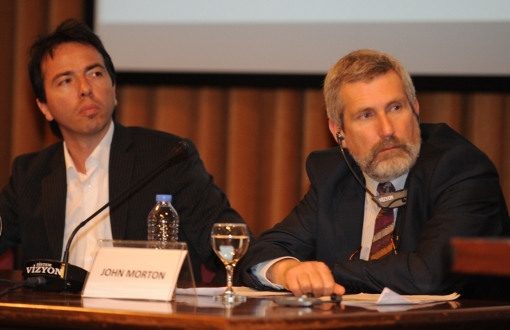 Following the approval of the Volume II, 'Impacts, Adaptation and Vulnerability', of the Fifth Assessment Report of the Intergovernmental Panel on Climate Change (IPCC) (see earlier news item) NRI's Professor John Morton has taken part in a variety of discussions and outreach events concerning the report's findings.

John was quoted on the day of the release in the independent Australian news and science website 'The Conversation'. Shortly afterwards John participated in an event on 'Agriculture growth, jobs, food security and climate: Taking action in response to IPCC', organised by the Climate Change, Agriculture and Food Security research programme, the Department for International Development (DFID), The World Bank and the reinsurance company Willis. The report can be viewed here; where John can be heard on the first video at 1 hour 12 minutes and on the second video at 1 hour 7 minutes.

John also gave a briefing on Volume II, with other IPCC authors, to the Committee on Climate Change; the high-level statutory body that provides the UK government with independent advice on climate policy.

On April 11th, John was one of the speakers at a meeting in Istanbul organised by the Turkish Climate Network, the TEMA Foundation, and Boğaziçi University, which served as the national launch event for Volume II of the IPCC Report in Turkey. 150 people from the NGO, research, media and government sectors attended this event. John covered the overall structure and process of the IPCC, some of the conclusions of Volume I and the main conclusions of Volume II.

Dr Barış Karapınar of Boğaziçi University, who had worked with John on the 'Rural Areas' chapter, went into more detail on projected changes to crop yields and food prices, and what the knowledge in the IPCC report could say about the widespread and severe drought currently affecting most of Turkey. The meeting was widely covered in the Turkish media, including the TV station NTV and the newspapers Milliyet, Vatan, Taraf and Cumhuriyet.