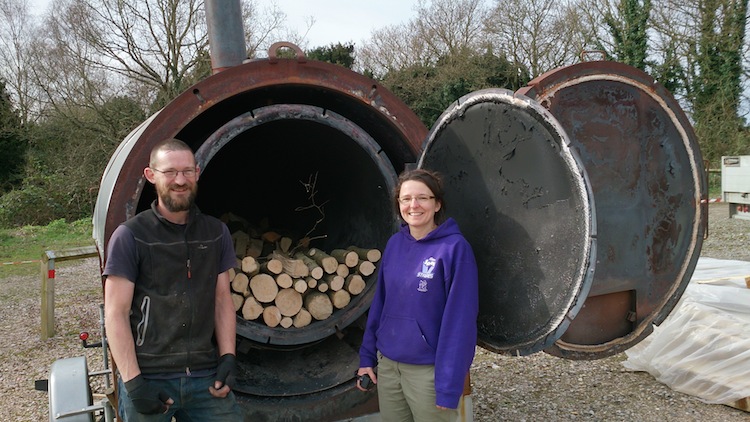 A public event was held in Canterbury recently, organised by NRI PhD student Hannah Scott, to understand the potential production and use of biochar (charcoal applied to soils) in Kent and the UK. Biochar is thought to improve soil fertility and to have potential as a means of carbon sequestration.

Hannah Scott is a research student at the Natural Resources Institute (NRI) studying the impacts of biochar on crop production, with supervision from Chris Atkinson, Professor of Sustainable Agriculture and Climate Change.

They are interested in determining if biochar application to agricultural systems improves the soil's ability to hold onto water and nutrients, which are vital for crop growth. As part of her PhD programme Hannah organised a public event at which several speakers presented their thoughts on the potential impacts of biochar on soils, the advance in biochar production technology (pyrolysis) and issues linked to the economics and regulation of its use. Over 40 people attended the event from academia, horticulture and forestry management, the speakers were from the biochar industry and the British Biochar Foundation (BBF).

This event was sponsored by a grant through the Futures Initiative funding from Canterbury Christ Church University. As part of the event attendees were able to see the process of biochar production first hand and talk to those in the developing industry. To develop her PhD studies Hannah also used the event and the availability of the mobile pyrolysis unit to produce biochar derived from different feedstock sources such as waste wood and other bio-wastes from coppicing activities in Kent.

Chris said "It is well recognised that the incorporation of carbon into soil can benefit agricultural production and that biochar provides a means of storing atmospheric carbon in soil for hundreds if not thousands of years. What we are particularly interested in at NRI is seeing if these benefits also translate into greater crop yields. Given NRI's interest in supporting international development we see a huge opportunity for biochar to have an impact on agriculture and soils in places, such as sub-Saharan Africa where soils are often nutritionally poor".