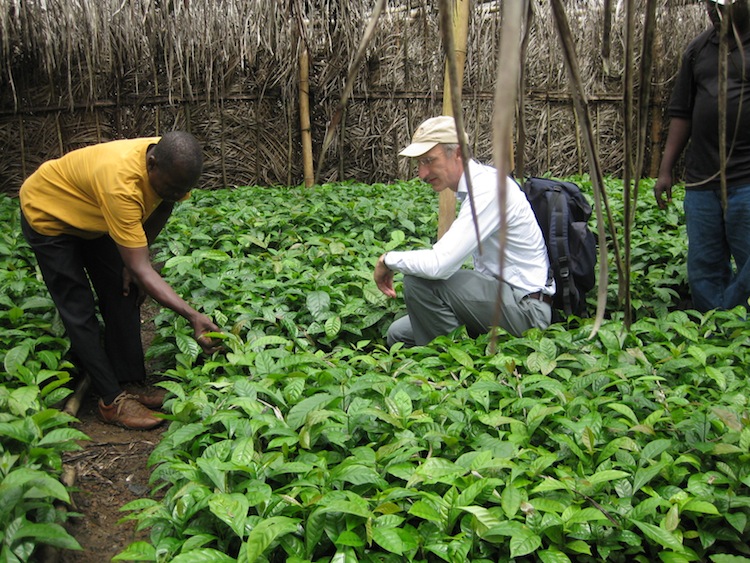 NRI has been awarded a €1.4m grant to regenerate the coffee production capacity of Sierra Leone through replanting and rehabilitating abandoned plantations with the collaboration of farmer associations, cooperatives, traders and the government. Over the next 3 years, the 'Robusta Coffee Development Project' aims to improve the livelihoods of about 10,000 farmers in Sierra Leone through improved productivity and access to markets.

NRI will provide training and technical assistance to the farmer associations to improve their business management capacity, test new quality processing methods, and the application of sustainable production practices to increase production while maintaining ecosystem services from traditional agroforestry systems.

Before the civil war, Sierra Leone was an important coffee producer exporting about 25,000 tonnes per year, but currently only about 2,000 tonnes are exported annually and the sector has not recovered significantly during the past decade of peace.

The project, funded by the European Commission, is part of the Sierra Leonean Government's Agriculture for Development Programme. It proposes to help Sierra Leone compete in world markets by achieving better prices and producing products which are high quality and certified as sustainable.

Jeremy Haggar from NRI, the project leader, said: "This project will help farmers who barely produce enough food for themselves to renovate their abandoned coffee farms and generate income to reduce rural poverty in Sierra Leone, one of the world's poorest nations."

The project will be implemented with Welthungerhilfe a German development NGO and two Sierra Leonean farmer organisations; Agroforestry Farmers Association and Eastern Farmers Multipurpose Cooperative Agency in the Eastern Province of Sierra Leone.

On the 28th August the project was formerly launched in the town of Kenema, in the presence of the Deputy Minister in the Ministry of Trade and Industry, Alie Badara Mansaray; the Director General of the Ministry of Agriculture Forestry and Food Security (MAFFS), Francis Sankoh; John Christian Abu Kpawoh, EU Project task manager; and Resident Minister East, Hon William Juana Smith. The project was presented by Jeremy Haggar to about 100 government, farmer and NGO representatives.

In his inaugural speech, the Minister for Trade said the Agriculture for Development Programme intends to rejuvenate the cash crop sector, targeting selected cash crops with the highest socio-economic comparative advantage, among which cocoa and coffee are key.