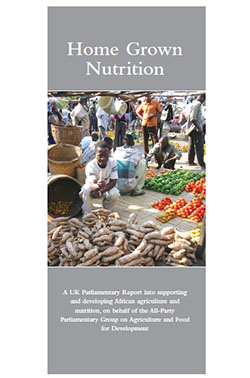 Parliamentarians of the All-Party Parliamentary Group (APPG) on Agriculture and Food for Development are calling on the UK Government, and specifically the Department for International Development (DFID), to invest in agriculture to combat the hunger that 925 million people around the world are undernourished face every day - in a Parliamentary Report, on "Home Grown Nutrition".

In the report, a HarvestPlus project, in which NRI is a contributing partner, is used as an example of successful 'Home Grown Nutrition'. The project improved the vitamin A status of women and children through adoption of orange-fleshed sweet potato in place of traditional white-fleshed ones.

Andrew Westby, Director of NRI says: "The Natural Resources Institute welcomes this timely report, we believe that smallholder farmers are crucial to addressing the challenges of global hunger, and more sustained support for them would be a positive step towards greater food and nutrition security worldwide."

The report's recommendations come ahead of a high level meeting that will be co-hosted by the UK government on 8 June. 'The Nutrition for Growth: Beating Hunger through Business and Science' meeting will be held in the build-up to the G8 summit in Northern Ireland and will bring together business leaders, scientists, governments and civil society to make the ambitious commitments needed to tackle nutrition in some of the world's poorest countries.

Building on the issues raised by the Hunger Summit held in London last summer, which highlighted the devastating consequences of undernutrition on children, it is expected that as a result of this next meeting, the UK will make financial pledges to support work on nutrition.

Lord Cameron of Dillington, chairman of the APPG on Agriculture and Food for Development, stated that, "Agriculture is the basis of many, if not all, pathways to improved nutrition. All development goals and interventions are strengthened by a productive agricultural sector."

Agriculture as a development theme has been chronically underfunded by DFID in the past. NRI, and the APPG of Agriculture and Food for Development, urge the government to make sure agriculture is no longer overlooked. Investments in agriculture must be seen as a long term project, putting smallholder farmers at the centre of such programmes.