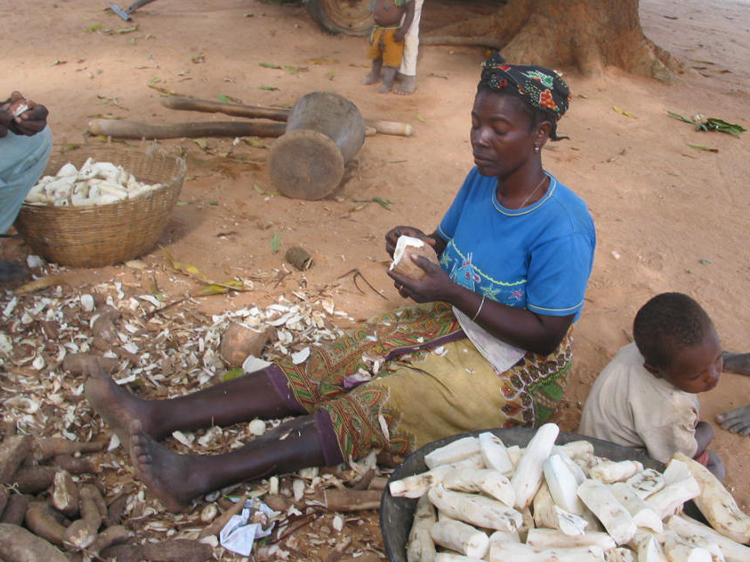 NRI have begun work on a new project "Limiting the impact of cassava brown streak disease on smallholders, women and the cassava value chain", or "LimitCBSD", to mitigate the impact of virus diseases of cassava on farmers in eastern Africa. The project is funded by the African Union, and implemented in collaboration with local partners in Kenya, Tanzania and Malawi.

Cassava is a key food security crop in sub-Saharan Africa and increasingly offers opportunities for income generation from the sale of fresh roots and diverse processed products.

In recent years, there have been rapid and devastating outbreaks of CBSD, especially in parts of Uganda, Kenya and Tanzania near to Lake Victoria, severely affecting cassava production and food security in the region. Many cassava farmers are women and currently experience high levels of poverty. The damage caused by CBSD is therefore disproportionately felt by these groups.

LimitCBSD was set up with two main objectives; to better understand the social and economic impact of CBSD on women and smallholders, and to identify a solution to the problem by developing cassava resistant to CBSD, which is the sustainable way to control the disease.

In collaboration with another NRI-led project, Cassava: Adding Value for Africa (C:AVA), funded by a grant from the Bill & Melinda Gates Foundation, a major survey was carried out in Kenya, Tanzania, Malawi and Uganda to understand the impact of CBSD on farmers. The survey has revealed that, in areas where the disease been present for many years, the disease probably has less impact on farmers than previously assumed because farmers have adapted by cultivating varieties tolerant to the disease. The impact of CBSD on new areas, however, cannot be underestimated as most of the varieties are susceptible and farmers are abandoning the cultivation of susceptible varieties, which is eroding the genetic diversity of cassava in Eastern Africa.

In LimitCBSD, advanced molecular biology techniques, such as next generation sequencing techniques, are currently being used at NRI to speed up the process of identifying virus resistance genes in African cassava lines. The physical and human capacity of project partners will be enhanced by education, training and setting up of molecular biology laboratories and tissue culture technologies. We plan to deliver on two fronts in this project, first by identifying precisely the extent of CBSD as a problem, and then providing a solution to the problem by identifying varieties resistant to the disease.