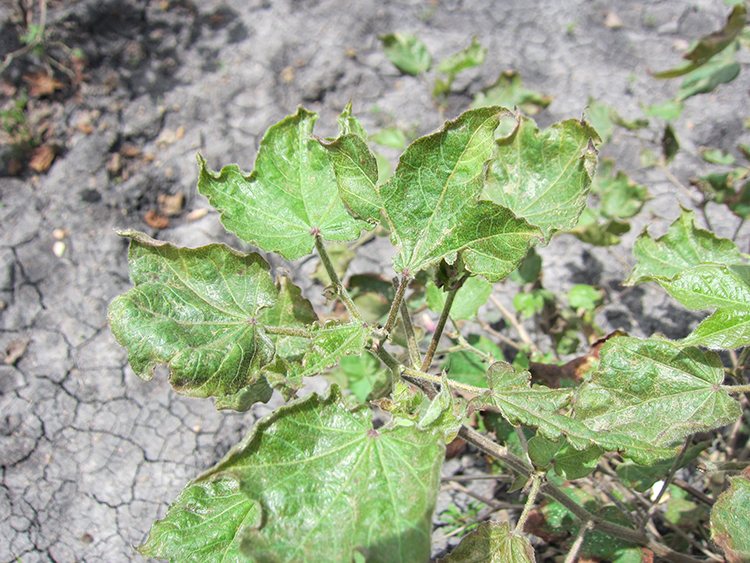 Results of a survey of smallholder cotton fields in the main growing area of Tanzania, that were afflicted with what appeared to be a new disease that caused premature defoliation of the crop, have revealed a hitherto unreported resolution of the cause of the mystery condition.

Dr Rory Hillocks, Integrated Crop Management Specialist at NRI, has been providing technical support to the Tanzanian Cotton Scientists at the Lake Zone Agricultural Research and Development Institute, to identify the cause of Premature Defoliation Syndrome (PDS), under the terms of a consultancy with the Gatsby Foundation. Rory conducted a pilot survey of smallholder cotton fields with the Tanzanian scientists in April 2013 to establish the protocols and the Tanzanian team scaled-out the survey later in the year.

The disease causes leaf distortion; the leaves become bronze in colour before drying out and dropping from the plants prematurely. As these symptoms occur at the important boll forming stage of growth, PDS can cause a 100% loss of marketable yield.

The results of the survey have demonstrated that PDS was confined to fields where a synthetic pyrethroid (SP) insecticide had been consecutively sprayed several times. Unusually high numbers of a tiny insect called thrips were also observed on plants showing PDS symptoms. Rory says "it seems that consecutive sprays with the SPs had killed-off the natural enemies that normally keep thrips numbers in check, allowing a resurgence of their populations to the point where they become damaging to the cotton plants".

Thrips as a pest of cotton are normally associated with damage to the seedlings but there are no reports from Africa of thrips as a pest of mature cotton. Pest resurgence induced by spraying with a single type of insecticide is quite common and is known already in cotton with respect to whitefly and red spider mite, but this is the first record of thrips resurgence.