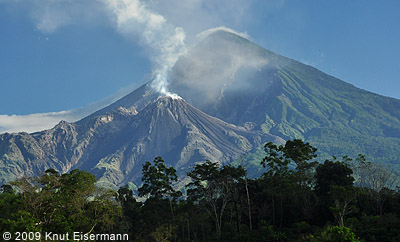 The project 'Agroforests: A critical resource to support the Megadiversity in Guatemala' has been exploring the role of two linked national initiatives to recognise and support farms that conserve biodiversity.

Diego Naziri from NRI together with the National Coffee Association and Foundation for the Defence of Nature have interviewed farmers in two regions of Guatemala, as part of a project on biodiversity in agroforests funded by the Darwin Initiative, to understand the influence of these linked processes in generating incentives for biodiversity conservation.

Their main findings were that farms registered as private nature reserves tended to show more diversity in the type of shade over the coffee plantations and to conserve larger forest areas. Both factors are beneficial for biodiversity conservation. Also the private reserve status is often used as a promotional tool for ecotourism activities. Revenues from ecotourism are conducive to conservation because they cover part of the associated direct and indirect costs of the reserves.

The study was carried out in two regions hosting a number of farms that opted to register as private nature reserves: the Cloud Forest Corridor in the Purulha district and the Pacific Volcanic Chain in the region of Palajunoj. In the former, private reserves have on average 70% forest cover, while in the latter over half of the farm area is shaded coffee production, with about 18% forest cover.

One of the primary motivations for having reserve status is the additional protection that it provides from land-invasion, particularly of forest land that can be seen as unproductive and thus subject to being taken over by land-less families. On the other hand, the farms with nature reserve status are subject to the protected area regulations that pose additional restrictions on the management (thinning or pruning) of the shade trees in the coffee plantations. These factors have influenced the decisions made by coffee producers on whether to seek or maintain reserve status.

In both areas, about 60% of the private reserves have developed eco-tourism initiatives. Several farms have built their eco-tourism activities upon the reserve status, using it as a promotional tool. The services provided by the farms vary, but include lodging, bird watching, horse riding, visits to archaeological sites, etc. and range from community tourism to organised tours.

There is a need for better promotion to expand visitor numbers which would enable other interested land-owners to develop this alternative source of income as an incentive for them to conserve the environment. One of the dreams of the local farmers is to offer tours to secondary school students from the cities of Guatemala so they can learn about life in rural areas, the nature they conserve, and build the environmental conscience of future generations of Guatemalans.