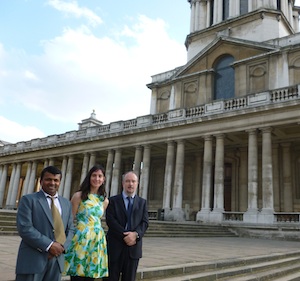 A reception was held with the University of Greenwich Court of Governors to recognise all newly appointed Professors and Readers, and the winners of the Early Career Research Excellence award. Professor Ben Bennett, Dr Maruthi Gowda and Dr Aurélie Bechoff of NRI were invited to attend the reception, at the Stephen Lawrence Gallery, on the 1st July 2013.

Ben Bennett, Marketing Economist at NRI and Head of the Food and Markets Department, has been promoted to Professor of International Trade and Marketing Economics. He spoke with two other new Professors of Economics at the event about possible future collaboration, but said "the best part was the opportunity to hear about the successes of the University's Early Career Researchers."

Maruthi Gowda, a member of the Agriculture, Health and Environment Department, specialising on plant viral diseases and their whitefly vector Bemisia tabaci that infects cassava, vegetables and other staple food crops in the tropics, was awarded Reader in Molecular Plant Pathology. He commented: "It is a great honour to be awarded the title of Reader and to have further recognition of the work that NRI is doing in molecular biology to improve the crops that are vital to poor communities around the world."

Food technologist Aurélie Bechoff was awarded an Early Career Research Excellence Prize for her work on orange-fleshed sweet potato and cassava. She said "I was delighted to receive this award. It is really exciting to see that the work NRI has done on biofortified orange-fleshed sweet potato has been internationally recognised and that biofortification is being taken up by the international community as a strategy for reducing vitamin A deficiency in the developing world."