The Natural Resources Institute (NRI) welcomes the publication of the recently released Inquiry Report from the All Party Parliamentary Group (APPG) on Agriculture and Food for Development entitled 'Growing out of Poverty'.

Andrew Westby, Director of NRI at the University of Greenwich stated "This is a very important and timely report from the APPG that highlights the need to focus on small-holder agriculture as a means of enabling the poor in Africa, especially women, escape from poverty, meet their nutritional requirements and provide the means to educate their children. Linking small-holders to markets, working to develop small and medium scale enterprises, reducing both crop production and post-harvest losses and supporting farmers to be resilient to climate change are important areas where NRI's work can make a significant contribution".

Drawing upon evidence from some of the world's most eminent authorities on food security and agricultural development, the Report builds upon the Group's first Report in 2010 which asserted that profitable small-holder agriculture must be the central tool for assisting the social and economic development of low income countries if Governments and Donors are to build long-term resilience into the livelihoods of the very poorest citizens in the developing world.

Lord Cameron, the APPG Chair, hopes that the APPG inquiry will be instrumental in helping DFID and other donors to identify and explore the best ways to support African agriculture and to help 450 million small-holders worldwide to grow themselves out of poverty.

The report highlights the importance of working with developing countries on multiple levels from investing the required political capital to understanding the small-holder farmer?s long-term needs. 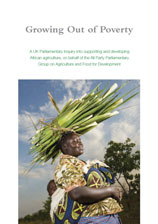 There is a growing body of literature which highlights the importance of agriculture in the developing world, which the Report contributes to,not only in helping deliver upon MDG1 and reducing the 1 billion people currently suffering from hunger, but also in building resilience into the livelihoods of the poorest and most marginal citizens.

NRI have extensive experience in this area and are currently undertaking the project Cassava: Adding Value for Africa (C:AVA), backed by the Bill and Melinda Gates Foundation, to link more than 70,000 small-holder households to national and international markets. The project aims to assist small-holder farmers to turn their cassava crop into high quality processed flour which can be sold at premium price in partial substitution for imported wheat. The institute has been working to support rural and agricultural development in developing countries for over 100 years, conducting world class agricultural research, consultancy and capacity building with partners and grassroots organisations in over 80 countries each year.