Science and technology in Sub-Saharan Africa: more support for capacity-strengthening is needed, says the Natural Resources Institute of the University of Greenwich, in evidence to House of Commons Inquiry. 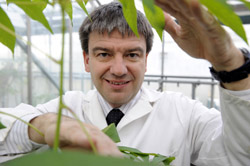 The millennium development goals for hunger and poverty will not be met unless Africa's capacity in science and technology for agricultural development is strengthened at all levels, according to Professor Andrew Westby, Director of the Natural Resources Institute (NRI) at the University of Greenwich.
He presented evidence to the House of Commons Science and Technology Committee in Parliament yesterday, Wednesday 8 February 2012, as part of its Inquiry on Science and International Development.
Professor Westby, pictured, who is also President of Agrinatura, the pan-European Voice for Agricultural Research for Development, said that successful capacity development initiatives should be long-term, locally-owned, and carefully-focused and nuanced interventions that address real needs of farmers and others involved in the processing and marketing of crops.

The Strengthening Capacity for Agricultural Research for Development (SCARDA) project, in which NRI is a key collaborator, has been highlighted by the inquiry for its innovation in building on existing research structures in Africa, being demand-led and achieving significant impact.

Professor Westby also argued that it is essential for others, such as parliamentarians, policy advisers, entrepreneurs, and farmer advisory services, to have their scientific knowledge and skills upgraded to meet the challenges and opportunities in the agricultural sector in Africa.