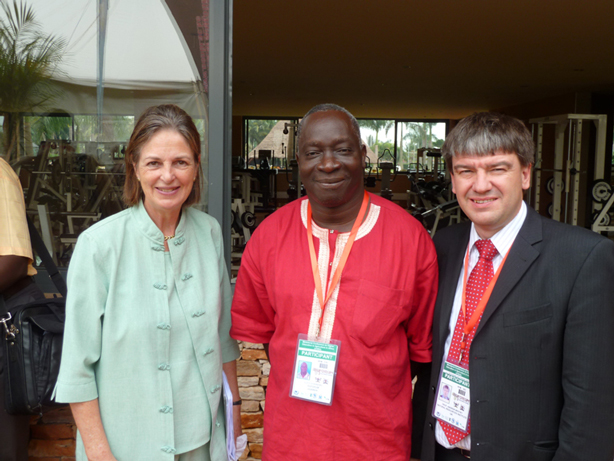 The University of Greenwich was strongly represented at the Ministerial Conference on Higher Education in Agriculture in Africa which was held in Kampala, Uganda on 15-19 November. The Conference was hosted by the Government of Uganda and organised by Makerere University supported by the Regional Universities Forum for Capacity Building in Agriculture (RUFORUM). The aim of the Conference was to highlight the measures that are needed to develop human capacity in the agriculture sector in order to contribute more effectively to growth and development in Africa. The University's Vice-Chancellor, Baroness Tessa Blackstone, made a presentation in which she emphasised the important contribution that international partnerships make to capacity building and referred to several initiatives in which NRI is involved. She also drew attention to the urgent need to provide greater support for womens' education, particularly in view of the fact that the majority of farmers in Africa are women.

Addressing gender issues in agriculture is a key theme in NRI's work and the Institute was a co-convener of a side event on 'Promoting womens' education and leadership in higher education in agriculture'. Lora Forsythe contributed to the background paper on 'Gender Issues in agricultural education within African universities' which was presented by Professor Lillian Tibatemwa-Ekirikubinza, Deputy Vice Chancellor of Makerere University in Uganda. Lora's contribution (Gender issues in agricultural education within African universities) drew on the findings of a recent study she carried out for the Strengthening Capacity for Agricultural Research for Development in Agriculture (SCARDA). This study, which was conducted with Dr Margaret Mangheni of Makerere University with support from NRI's Adrienne Martin, identified good practice in supporting women's participation in several African universities. It also emphasised the need for policy measures to create conducive environments for the education of girls and women, and this was included as one of the six commitments in the Conference Communiqué.

Lessons from the SCARDA initiative were presented by the project coordinator, Dr Irene Annor-Frempong, during a side event on strengthening partnerships in agricultural tertiary education. Tim Chancellor, NRI's coordinator for SCARDA, participated in this side event which was co-convened by the European Consortium on Agricultural Research for Development (AGRINATURA) of which NRI is an active member.

Additional contributions to the Conference were made by Simon Walker, Head of the University's Educational Development Unit, and Tony Worthington, Chair of the NRI Development Group. Linking to a recent input he made to the SCARDA initiative on e-learning, Simon Walker made a presentation on the attributes needed by graduates to allow them to make best use of emerging digital technologies. Tony Worthington contributed his experiences of strengthening the capacities of parliamentarians in Africa.

During the Conference, NRI Director Prof. Andrew Westby met with RUFORUM's Executive Director Prof. Adipala Ekwamu and discussed areas of current and future collaboration. They then signed a Memorandum of Understanding between the two organizations which builds on existing joint activities such as capacity strengthening in leadership and management and the enhancement of learning and teaching methods.