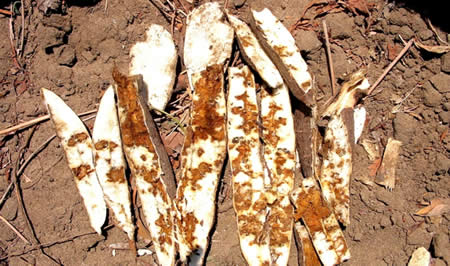 In a recent article published in the Journal of Virological Methods (Abarshi et al., 2010, doi:10.1016/j.jviromet.2009.10.023), researchers from NRI have described the most cost-effective and highly reliable diagnostic protocols for detection of Cassava brown streak virus (CBSV) disease.

Cassava brown streak disease used to be confined mainly to coastal areas of eastern and southern Africa, but in the past few years it has become substantially more virulent and begun spreading across the continent. The disease has invaded Uganda, moved around the shores of Lake Victoria in Kenya and Tanzania, and now entered DR Congo from where it seems poised to move right across sub-Saharan Africa. It is highly damaging, causing up to 70% loss in root weight of infected plants and rotting of tubers, and thus severely affecting root quality (see picture below) for both domestic use and marketing. The disease is a real threat to the livelihoods of the millions of poor people in sub-Saharan Africa.

Research conducted elsewhere and also at NRI has revealed the existence of two strains/species of CBSV in eastern Africa, for which additional novel protocols are being developed at NRI. Testing for the disease is critical in many ways: for identifying and supplying clean healthy planting material to farmers; for monitoring disease spread; and for facilitating breeding programmes for the rapid development of virus-resistant cassava, which is urgently needed in affected regions.

In this research, the conventional cetyl trimethyl ammonium bromide (CTAB) method was optimized to obtain maximum yields of viral nucleic acids from cassava leaf tissue. The CTAB method when used together with a two-step reverse transcription polymerase chain reaction (RT-PCR) was at least five times cheaper (~?2 per sample) than commercial kits (~?10 per sample) but was highly sensitive, being over 300 times more sensitive than the existing CBSV diagnostic protocols. Mathematical formulae were applied to estimate the probability of virus detection in order to achieve a balance between the numbers of samples to be tested per field versus the levels of accuracy required in virus diagnosis. It was estimated, for example, that a 100-plant sample gives a 99.9% chance of detecting 6.7% incidence, but a 400-plant sample gives the same chance of detecting an even lower incidence of 1.7%. This information will help those who are in the field (technicians, researchers, extension workers) to make informed decisions on the number of samples to be tested in a given field without compromising on the accuracies required to prevent the movement of virus-infected planting material.

This new and on-going research at NRI proposes highly reliable diagnostic protocols for CBSV that could be performed easily in typical African laboratories. They are alternatives to highly expensive and less sensitive commercial kits.