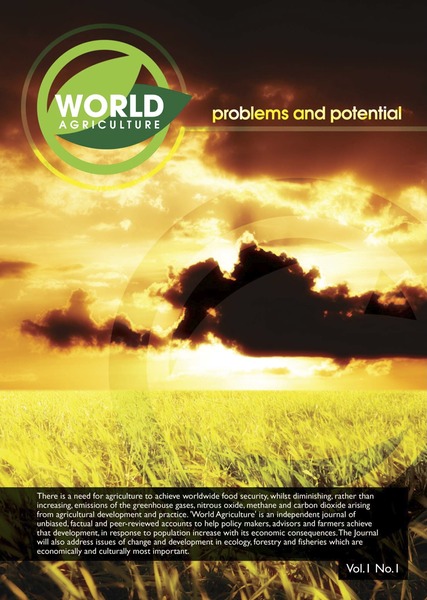 Member of the Editorial Board, Professor Sir John Marsh outlined: "It is the lesson of recent experience that the major issues confronting humanity need an approach which is both world wide and multidisciplinary. For too long we enjoyed the comfort of our own silos paying insufficient attention to policy issues affecting other communities and scientific progress in fields beyond our own. By providing a peer-reviewed forum in which these issues are brought together, World Agriculture will help to ensure a more balanced and realistic approach to the pressing issues of food supply, environmental impacts and climate change [and will] fill a unique role amongst independent, peer-review journals, namely the analysis and assessment of scientific and economic information for decision-makers' for example farmers, advisors, industrial leaders and policy makers - particularly those in developing countries."

Former NRI Advisory Group member Dr Christie Peacock, a Tropical Agriculturalist and Chief Executive of FARM-Africa welcomed the launch of World Africa by saying "it is a timely publication and I have every confidence that this independent journal will be a source of scientifically sound information, sensitive to current evidence on important agricultural issues. World Agriculture will be able to play a role in guiding the actions of policy-makers and practitioners alike."

Some of the key issues it is hoped the publication will address have been identified as:

The journal will be distributed from the World Bank's 15 centres around the world, it will also be available through other outlets.