Sounds of Courtship in Mosquitoes

For humans living in warm climates, the high-pitched whine of a flying mosquito is associated with potential discomfort and disease. For the mosquitoes themselves – as new research by NRI entomologist Dr Gabriella Gibson and fellow scientist Professor Ian Russell of Sussex University has shown – the whine of their wing-beats plays a significant role in sex recognition and courtship. Gabriella and Ian have been studying the wing-beat frequencies and behaviour of tethered individuals of the large predatory mosquito Toxorhynchites brevipalpis, when flying alone or near another flying mosquito of the same species. Their results have recently been published in the journal Current Biology (volume 16, pp.1311-1316, 11 July 2006, abstract).

It has long been known that mosquitoes hear with a specialized organ at the base of their antenna, and the attraction of male mosquitoes responding to the flight tones of females has been well studied, but the auditory behaviour of the females themselves was unknown. Gabriella and Ian have now shown, for the first time, the existence of interactive auditory behaviour between individuals that leads to sexual recognition and presumably plays a key role in courtship and mating. 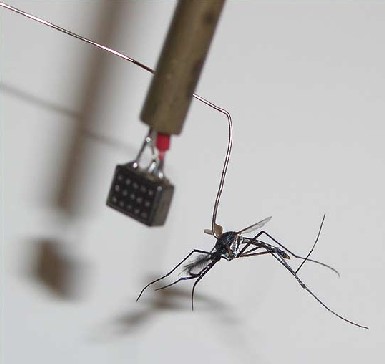 A male Toxorhynchites brevipalpis mosquito flying on a tether next to a microphone.
Photo courtesy of Professor Ian Russell

When the female was already in flight, which is the normal situation in the wild, the male adjusted his wing-beat frequency rapidly after take-off and the frequencies converged within about one second. When the male was in flight first, convergence was not so rapid and took more than six seconds after the female's take-off. In either case, the pair's matched wing-beat frequency (and thus similar flight speed of the individuals) lasted for at least 15 seconds. This is probably normally long enough for mid-air mating, though not in this experiment where the individuals were separately tethered to their microphones!

In contrast, individuals flown as same-sex pairs – although sometimes initially starting to converge their flight tones – reacted by diverging from each other's wing-beat frequency. In free flight, the resulting difference in flight speed would soon separate them.

It is possible that the convergence of wing-beat frequency of the courting male and female has the effect of synchronizing their flight speed and thus facilitating mating, but the researchers point out that this suggestion remains unproven. Also, although the different wing-beat modulation behaviour of opposite-sex and same-sex pairs shows that sex-recognition occurs early in this period of auditory interaction, the exact mechanism of recognition is not yet known and needs further study.

For more information, contact Dr Gabriella Gibson (This email address is being protected from spambots. You need JavaScript enabled to view it.)