Research by scientists from NRI and East Malling Research (EMR) has been honoured by an Environmental Award given by the Worshipful Company of Fruiterers, sponsored by Waitrose. Their work on the chemical structure of the pheromone of the apple leaf midge won the prestigious prize in the Research and Development category of the Awards for 2004. The prize - consisting of a cheque for £2000, an engraved glass rose bowl and a certificate - was presented to Prof. David Hall of NRI and Jerry Cross of EMR by the Lord Mayor of the City of London, Alderman Robert Finch, at the Mansion House on Friday 22 October. 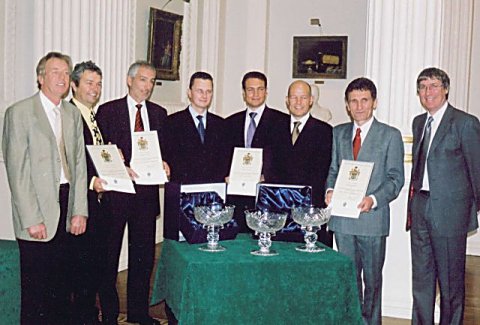 Winners of the Worshipful Company of Fruiterers' Environmental Awards after the presentation at the Mansion House by the Lord Mayor of the City of London (David Hall and Jerry Cross at right).
© University of Greenwich 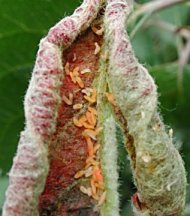 The apple leaf midge (Dasineura mali Kieffer) is an important pest of apples in the UK, mainland Europe, New Zealand and North America. The larvae cause the edges of the leaves to curl in characteristic galls, and growth is stunted. In nurseries and in young orchards, this pest can be devastating to the growing trees. Severe attacks by the midge in mature orchards can greatly reduce the photosynthetic area, adversely affecting fruit size and cropping in the following year. The pest has become resistant to conventional insecticides such as chlorpyrifos and has recently been almost impossible to control.

Scientists in New Zealand and Canada had previously showed that female apple leaf midges produce a sex pheromone that is highly attractive to the male midges. However, despite much effort, they were unable to identify the pheromone because of the very small amounts produced and its unusual chemical structure. The NRI and EMR team took up the challenge of identifying the pheromone and exploring the possibilities for its use in management of the pest, under a collaborative project funded by Defra, the East Malling Trust and the Horticultural Development Council. A significant element of this challenge was the minute scale of the pest. Referring to this, David Hall notes that: "These midges are very short-lived, very tiny and extremely difficult to handle. We found that each female only produces 1.5 picograms (1.5 × 10-12 grams) of the pheromone."

During the first year of the project, the sex pheromone was successfully identified and synthesized. Pheromone was collected from over 2000 virgin female midges. The collected material was first analysed by gas chromatography linked to electroantennographic recording - which monitored the response of a male midge - and then by mass spectrometry. Once the chemical structure had been identified, the pheromone was synthesized, and the synthetic material was shown to be identical to the natural pheromone component. The novel chemical structure of this pheromone is now covered by a patent application. 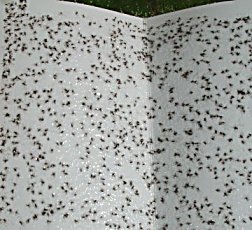 Field experiments have been carried out in the UK this past summer, and are now being continued by collaborators in New Zealand. They have shown that the synthetic pheromone is highly potent. Sticky traps baited with the pheromone caught more than 1500 male midges in one morning. Lures containing as little as one microgram of the pheromone are effective for pest monitoring, and the lures attract midges from more than 50 metres away. There is a good relationship between trap catches and midge population levels, and the catches are easy to count and interpret because the traps only catch apple leaf midges. It was originally envisaged that the synthetic pheromone would be used mainly for pest monitoring. However, because of the extreme potency of the compound, its possible use for controlling the pest (by mass-trapping, mating disruption or lure-and-kill) will now also be investigated during the project.

Asked to comment on why this research effort has been so successful, when others have failed to identify the pheromone, Professor Hall said: "Combining the teams from EMR and NRI has brought together experienced entomologists, electrophysiologists, analytical chemists and synthetic chemists in a collaborative effort that can achieve more than any of these disciplines working in isolation. We were also able to take advantage of our considerable experience in electrophysiological recording, our highly sensitive and dedicated GC-MS equipment, and the large collection of standards of pheromones and related compounds prepared at NRI."