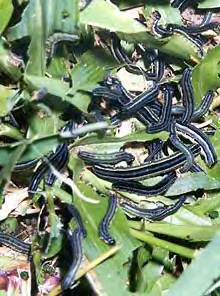 NRI's research on natural biological control of the African armyworm, Spodoptera exempta, has been gaining media attention. Following a press release by the University of Greenwich, an article about the work appeared on 13 December in the New Scientist's 'This week' section carrying news of interesting and significant research. Subsequently, Sir Tam Dalyell MP (writer of a regular column in New Scientist, a former shadow science minister, and longest-serving current Member of the UK Parliament) wrote to DFID, highlighting the New Scientist article and urging them to support more such research on natural biological control. The research, led by David Grzywacz, leader of NRI's Agriculture, Health and Environment Group, has been featured in several local Medway newspapers and has also attracted interest from broadcasting media, with plans for a television item on BBC South East Today and for inclusion in a forthcoming BBC World Service radio programme sponsored by DFID. The story has also been publicized by the London Press Service.

The armyworm is a major threat to food production in many eastern and southern African countries. During outbreaks, the armyworm caterpillars swarm across hundreds of thousands of hectares of crops at densities of over 1000 larvae per square metre, commonly causing overall crop losses of 30% in the affected areas and over 90% losses of maize in peak years. Armyworm outbreaks can be controlled by spraying chemical insecticides but these are too expensive for subsistence farmers or their governments and pose a threat to natural environments, beneficial insects and human health. Natural biological control agents such as the armyworm nucleopolyhedrovirus (NPV) are species-specific and thus environmentally safe. Such agents are increasingly being developed commercially, but are still too expensive for resource-poor farmers, especially if they have to be imported. 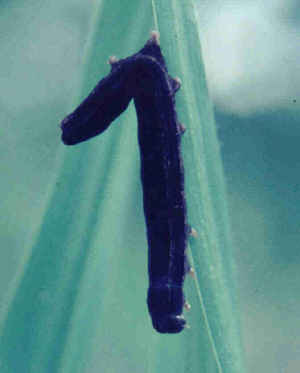 The NRI team has been researching armyworm NPV with scientists in Tanzania's Ministry of Agriculture & Food and in other UK research institutions. Their joint field trials over the last two years have shown that NPV can be highly effective in controlling armyworm if sprayed early in an outbreak. The team has therefore developed an outbreak-forecasting system that combines local 'scouting' using pheromone traps with satellite weather data and armyworm population models. Using an approach tried in countries such as Brazil for low-cost local production of NPVs against other pests, the team is now testing the feasibility and efficacy of systems for collecting and processing NPV from dead larvae that have contracted the disease in natural armyworm outbreaks. If successful, this will allow Tanzania, and neighbouring countries, to manage outbreaks of one of their most serious pests with a locally-produced low-cost control agent.

Similar approaches to pest management in Kenya by David Grzywacz and his team under DFID's Crop Protection Programme, managed by Dr Frances Kimmins of NR International, made a major contribution to NR International's recent success in being named by the British Consultants & Construction Bureau as the top Small Consultancy Firm of the Year 2003 for assisting in the introduction of natural pest control to help Kenyan farmers and horticulturalists export more produce, improve domestic yields and alleviate poverty (more). For more information on the African armyworm biological control project, contact David Grzywacz by This email address is being protected from spambots. You need JavaScript enabled to view it. or download the .pdf file giving the background to the armyworm problem and the research being undertaken.