SMART Grant for a Smart Instrument

NRI's Professor of Food Safety, Ray Coker, has been awarded a £45,000 SMART grant by the UK's Department of Trade and Industry to develop an instrument that will allow food wholesalers and retailers to test their own products for the presence of toxic chemicals, rather than having to send samples for expensive laboratory testing. The University of Greenwich is contributing an additional £15,000 to the project, which involves a joint team from NRI's Food Management & Marketing Group and the School of Engineering. 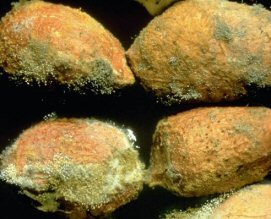 Goundnuts (peanuts) visibly infected by the mould Aspergillus flavus: even when infection levels are scarcely visible, the mould may have contaminated the nuts with health-threatening levels of mycotoxins.
© University of Greenwich

Ray explains: "All players in the food sector work hard to ensure that excessive levels of poisonous chemicals, from pesticides, antibiotics and hormones, to naturally-occurring poisons such as mycotoxins, do not find their way into foods. Mycotoxins are produced by certain moulds, and even minute quantities in foods and feeds can affect the health of humans, livestock and poultry, whilst high levels of contamination can cause death. The aim of the project is to develop a simpler method for the rapid detection of toxic chemicals in the food marketing chain, without the expense and time-consuming process of laboratory analysis."

The project team led by Ray Coker of NRI's Food Management & Marketing Group includes: Martin Nagler, an NRI Associate and former staff member (analytical chemistry); Dr Richard Seals and Dr Robert Jenner, School of Engineering (electronics and optics); and John Dominey, MSc student in the School of Engineering. The new procedure for detecting the toxins will be based on the development of a special instrument and will initially focus on the measurement of levels of mycotoxins in cereals, dried fruit and edible nuts.

Once the feasibility of the process has been established, the team then hopes to extend it to detect other undesirable chemicals in human food. A key aim of the work is that the procedure will be inexpensive and could thus be used to save lives in the developing world where staple foods, such as maize and groundnuts, can be heavily contaminated by mycotoxins. It is expected that the approach will also benefit fragile economies by supporting quality management in valuable food export markets that could otherwise be lost if suppliers cannot ensure that their products meet the importers' quality standards.