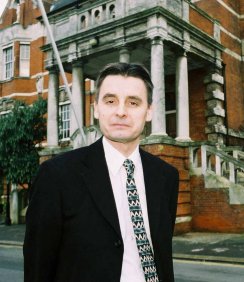 Dr Guy Poulter is the new head of NRI. Originally an expert in fisheries, Guy has over 25 years experience of working for - and in - developing countries. He was previously Director of Operations at NRI and has now been appointed Acting Director of the Institute following the retirement of Tony Clayton at the end of 2002. Guy will lead the work of over 115 staff - including about 90 specialist natural and social scientists - at the Institute, which has a prestigious worldwide reputation for research, consultancy and training services in sustainable development. NRI's diverse expertise includes such areas as social anthropology, land management, farming systems, food science and pest management.

With a first degree in Food Science from the University of Strathclyde and a PhD in Food Biochemistry from the University of Nottingham, Guy Poulter joined one of NRI's forerunners, the Tropical Products Institute, in 1976. In the early part of his career he travelled extensively around the world advising poor fisherfolk on the best way to handle, process and preserve their catches, and undertook a two-year assignment in Sri Lanka. He was rapidly promoted, firstly to Head of the Storage Department, concerned with the management of stored grain and other durable food commodities, and then via a range of central administrative posts to the role of Deputy Director for Food Science and Crop Utilization. Taking a career break from NRI in the mid 1990s, Guy was seconded to the UK Government's Department for International Development (DFID) where he spent three years as a Senior Adviser for Agricultural Research and then a further year working with the European Commission in Brussels. Since his return to NRI in 2001, Guy has undertaken a broad range of senior management tasks in support of substantial changes in the Institute's marketing and operations. In recent years, Guy's special professional interest has been in the developmental agricultural research policies of the UK, the European Commission, and the European Union more widely.

"After a career of over twenty five years at NRI, I am honoured to be asked to lead the Institute at this key stage in its development," says Guy Poulter. "NRI has been a significant national and global player in helping to combat poverty for more than a century - it's up there with the very best in the world. The contribution of the NRI staff brings respect and kudos to the University and to the Medway Region, and we will do all we can to continue to work to make a difference to the lives of some of the poorest people on earth."

The Vice-Chancellor of the University of Greenwich, Professor Rick Trainor, says: "Guy Poulter combines an excellent professional track record with strong management skills. He has the ability and the vision to lead NRI into a stable and successful future."

On 4-5 March in Accra, NRI and the Ghanaian Food Research Institute organized a participatory workshop at the inception of a new research project on the safety of street foods in Ghana. The meeting brought together the coalition research partners and other stakeholders to discuss project objectives and agree strategies to achieve the research outputs.