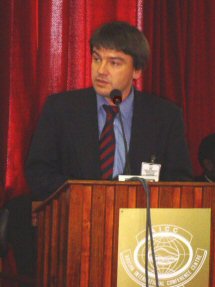 Andrew Westby, NRI's Director of Research and Professor of Food Technology, has been elected President of the International Society for Tropical Root Crops (ISTRC) at its triennial Symposium in Arusha, Tanzania, from 9 to 14 November 2003. The Symposium was attended by about 150 of the world's leading researchers on tropical root crops. Andrew, who has previously served as the ISTRC's Councillor for Publications, will be its President from 2003 to 2006.

Prof. Westby has over 15 years experience of working with the major tropical root crops of cassava, sweet potato and yam. Much of his early work on root crops was concerned with understanding the mechanisms by which cyanogenic compounds are reduced during fermentation. In the early 1990s he was a key player in the major Collaborative Study of Cassava in Africa (CoSCA). Since then he has worked on root crops in South America and sub-Saharan Africa. He played a significant role in the development of the Global Cassava Development Strategy (see website). He is still a member of the Strategy's Coordination Group and is taking a lead in its Post-Production and Marketing Component.

In his inaugural speech as President, Prof. Westby said "Tropical root crops have important roles to play in alleviating poverty and ensuring the food security of many millions of people in the developing world. In the next three years the Society will endeavour to encourage young scientists, to provide the means of sharing good practice, and to influence policy, in support of the role that root crops can play in development."