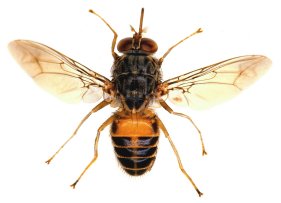 One of Africa's most harmful pests, the tsetse fly, which can infect humans and cattle with fatal sleeping sickness and nagana (the equivalent disease in cattle), has been all but eradicated from parts of the African continent with the help of artificial cows.

Developed by an international group of researchers including scientists from NRI, the artificial cows attract tsetse by using kairomones (chemicals emitted by one species that influence the behaviour of another) to mimic the smell of real cattle. The fake cattle are impregnated with insecticides that kill the tsetse attracted to them.

These artificial cows were first introduced into Zimbabwe in the mid-1980s, when thousands of cattle were infected with nagana, transmitted by the tsetse. Cases of nagana in Zimbabwe plummeted almost to zero and have remained at this very low level for the last five years, mainly due to the use of the artificial cows, of which about 60,000 are now in use. The fake cows also act as an effective barrier to stop tsetse re-invading areas cleared of the flies.

Not only are the artificial cows highly successful in controlling tsetse, but their use also results in a dramatic reduction in the amount of insecticide necessary to control this pest. With only four artificial cows needed per square kilometre to ensure effective tsetse control, the use of insecticide is far more targeted than conventional widespread aerial and ground spraying, resulting in a greatly reduced environmental impact.

"During the mid-1980s, when cases of nagana were at their peak in Zimabwe, the government was spraying 100-200 tons per year of the pesticide DDT (now banned in many countries) to control the tsetse fly population," says Dr Stephen Torr of NRI. "In total, around 2900 tons of DDT were used in Zimbabwe. This pest control policy has now been abandoned in favour of more effective and environmentally-friendly alternatives such as artificial cows."