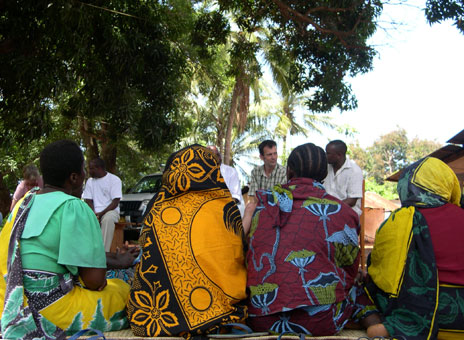 A team led by NRI's Reader in Veterinary Entomology, Dr Stephen Torr, has been shortlisted for the prestigious Times Higher Award for 'Research Project of the Year', for work on controlling tsetse fly in Africa, to reduce the fatal disease of sleeping sickness spread by these flies. Dr Torr is a leading expert in the control of tsetse flies, and for this project he teamed up with colleagues in the University of Edinburgh to find better ways of using pesticide against tsetse whilst reducing costs and limiting environmental damage. He explains the background to the research: "Sleeping sickness spread by the tsetse fly is a dreadful problem in Africa, killing 30,000 people and two million cattle every year. Although insecticide is effective for controlling the tsetse, it has not been widely used as it is too expensive for farmers and may reduce the immunity of cattle to diseases that are spread by ticks."

Dr Torr's project found that a more focused application of a smaller amount of insecticide is actually more effective. Using a form of DNA fingerprinting, the team showed that tsetse prefer to feed on the larger and older cattle in a herd, and that they mainly feed on the legs and bellies of the cattle. "So farmers don't need to spray the whole cow with insecticide and they don't need to spray every cow – thus cutting pesticide costs to just £1 per cow per year," Steve points out.

The project's findings have been translated into a practical scheme, using an interactive programme – a 'virtual entomologist' – to help livestock farmers to plan operations against tsetse. To date, 200,000 cattle in Uganda have been treated under the new system, as part of a wider campaign to eradicate sleeping sickness, and trials have also been carried out in Ethiopia, Kenya, South Africa, Tanzania and Zimbabwe. The research was supported by DFID's Animal Health and Livestock Production Programmes, and the field work involved many NGOs, government veterinary departments and community-based projects in these countries.

The winner of this Times Higher Award will be announced at a ceremony in London on 29 November. Meanwhile, Dr Torr is focusing his attention on finding similar solutions for control of the biting midges (Culicoides spp.) that are vectors of the recent outbreak of bluetongue disease among ruminant livestock in eastern England.

For further information about this research on control of tsetse and other livestock disease vectors, contact Dr Steve Torr (This email address is being protected from spambots. You need JavaScript enabled to view it.).