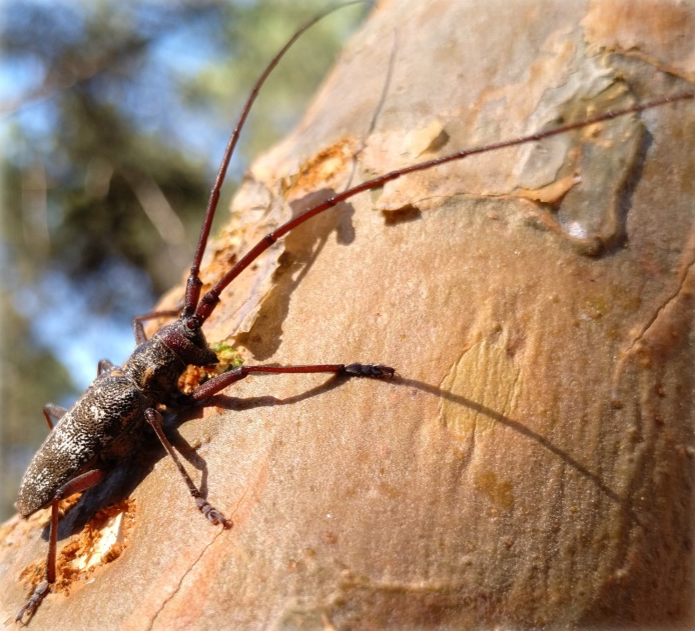 Pine wood nematode (PWN) is the cause of pine wilt, a devastating disease of pine trees, which is often fatal to the tree. The disease is spread naturally by vector beetles of the Monochamus genus; the only vector identified conclusively in Europe is Monochamus galloprovincialis.

When the beetle feeds on a susceptible host pine, the PWN enters the tree and feeds on the epithelial cells which line the resin ducts. The transport of water and nutrients in the tissues of the infested tree is disrupted, and the disease can manifest within as little as a few weeks. Signs include browning of the needles or yellowing of the leaves, and the tree may die within two to three months. It was introduced into Portugal in 1999 and subsequently spread throughout the country to 500,000 hectares (ha) of forest, despite €38 million spent on attempted eradication. In the absence of control measures, it was estimated that losses in Europe due to damage by the nematode would be of the order of €20 billion during the period 2008–2030.

The Chemical Ecology Group at NRI, led by Professor David Hall, has carried out research on pheromones and other semiochemicals affecting the behaviour of insect pests and development of their use in pest management from 1969 to the present. The research included identification of pheromones of several cerambycid (longhorn) beetle species. In 2007, the Group began a collaboration with Prof Juan Pajares, University of Valladolid (UVa), Spain. At NRI, volatile organic compounds emitted from male and female beetles were collected and analysed by gas chromatography coupled to electroantennographic (EAG) recording from receptors on the beetle antennae, a technique pioneered by NRI. A male-specific compound elicited EAG responses from antennae of both female and male beetles. This was identified as a novel structure using mass spectrometry, microanalytical techniques and comparison with synthetic standards in the large library of compounds built up previously at NRI. The Group developed a route for synthesis of the compound which is suitable for large-scale production; the synthetic compound was shown to attract M. galloprovincialis beetles to traps in field tests in Spain. 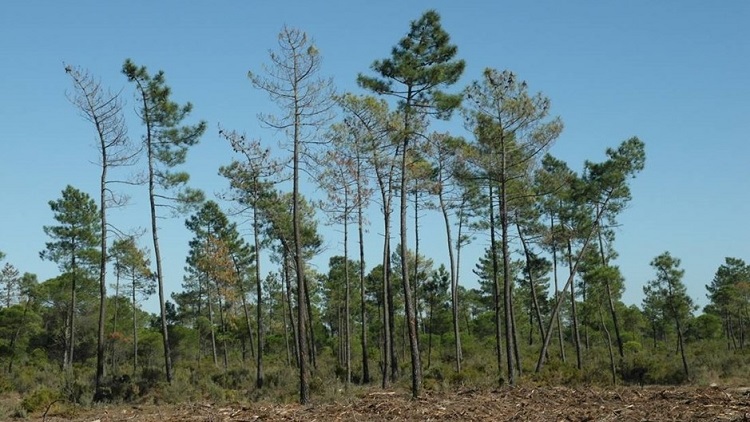 This work was taken up by the EU REPHRAME project (2010–2014) involving Prof Hall, Prof Pajares and collaborators from five other European countries, China and USA. NRI developed slow-release formulations for the pheromone and synergists, and the attractant system was patented in 2011. Production of lures in Spain was taken up by SEDQ and Econex under licence, with the trade name “Galloprotect”. NRI subsequently showed that the compound identified as the male-produced aggregation pheromone of M. galloprovincialis was the pheromone of M. sutor, a potential new vector of PWN in Europe and Asia, and lures and traps were optimised for this species. The compound was also identified as a pheromone component in three other Monochamus species and shown to attract eight other Monochamus species worldwide, including M. alternatus, the main vector of PWN in Asia. The compound was given the common name “monochamol” and is widely used to bait traps to detect the presence of invasive species of Monochamus worldwide. The chemical structures of attractants for over 60 different species of insect pests or vectors have been identified and synthesised, and research by the Group contributed to the award of the Queen’s Anniversary Prize 2019 to NRI for development and implementation of innovative, “smart” methods of controlling pests and diseases.

Development of pheromone-baited traps for the vector M. galloprovincialis, resulting from this research by NRI and its partners, has changed policy and practice in the European Union (EU) to prevent spread of the disease and the subsequent economic losses, and also benefitted SMEs which have commercialised the patented trapping technology. 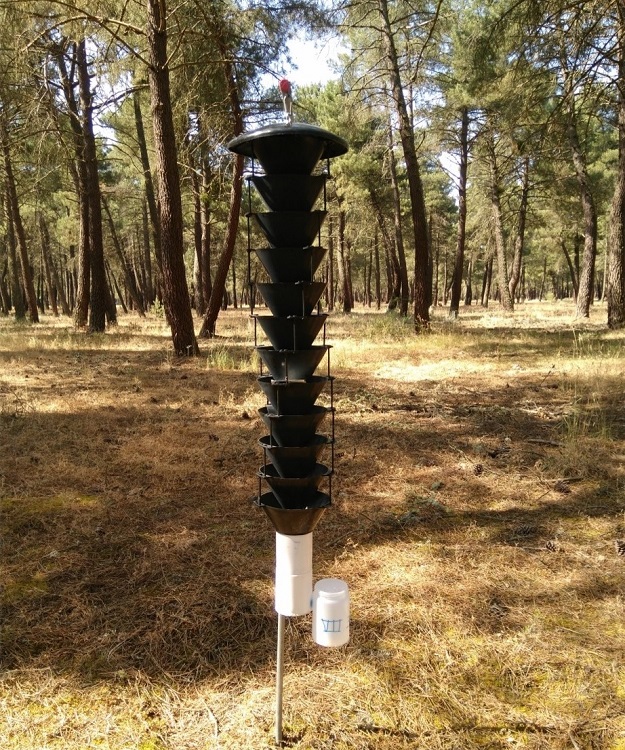 Policy impacts: (i) In light of results of the REPHRAME project, in 2016, an EU Task Force recommended the use of pheromone-baited traps for M. galloprovincialis, followed by molecular analysis for presence of PWN. Based on the availability and effectiveness of pheromone traps and new, more accurate data on beetle flight, they proposed reducing the clear-cut zone from 500 to 100m and the buffer zone from 20 to 6km. This greatly reduced the operation costs and loss of trees; the trap network reduced populations of vector beetles, thereby reducing risks of spread. In 2017, these recommendations were taken up by the EU via an EC Implementing Decision. (ii) In 2015, the French Agency for Food, Environmental and Occupational Health and Safety endorsed pheromone-baited traps as an essential part of the control strategy. (iii) A 2016 policy document from Euphresco (70 organisations in 50+ countries coordinating national phytosanitary research) laid out the optimal strategy for trans-national monitoring of Monochamus using pheromone-baited traps. (iv) In 2017, the UK Forestry Commission introduced use of pheromone-baited traps for monitoring Monochamus and PWN in the UK with over 15,000km2 of conifer forest; trapping is particularly important as trees are likely to be asymptomatic in the UK, so infection is difficult to detect. (v) In 2018, the European and Mediterranean Plant Protection Organization revised their ‘Standard’ for control and eradication of PWN, taking into account “the availability of an effective pheromone/ kairomone attractant for trapping it.” (vi) The European Food Safety Authority Plant Health Panel of Experts advised “the most efficient detection method is trapping” for invasive species of Monochamus worldwide.

Economic impacts: As the use of pheromone traps for PWN and its vector is part of an integrated programme, it is not possible to attribute savings in the forestry sector to this innovation alone. However, three isolated outbreaks of PWN in Spain were detected early and eradicated with expenditures of less than €5 million, as opposed to the case in Portugal, where over 50,000ha were affected, and an eradication campaign costing €38 million failed. Future impact can be expected wherever PWN is a threat. Lures for Monochamus containing the pheromone identified by NRI are now sold by at least seven different companies, including one in the UK and two in Spain. SEDQ Spain stated that development of M. galloprovincialis dispensers with NRI and UVa has allowed them to expand their business portfolio in forestry with product sales in Europe worth €1.5million from 2013–present.

Watch a short video explainer here, with thanks to ZOL Olsztyn, Yvann Krupa and Essence of Life for the YouTube footage: