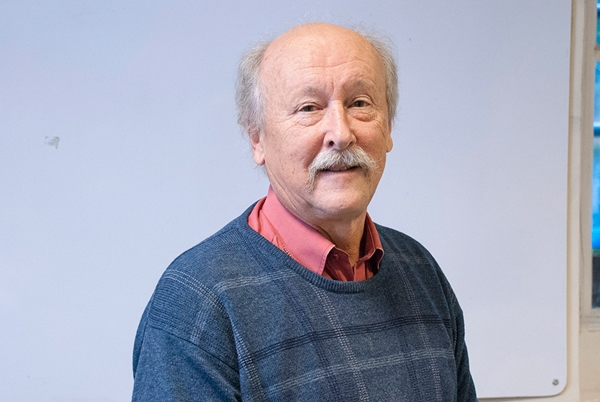 Professor Robert Cheke joined the Centre for Overseas Pest Research, one of the Natural Resources Institute's predecessor scientific units, as a senior scientific officer in September 1976 and was promoted to principal scientific officer (G7/PS2) in 1990. He was appointed Professor of Tropical Zoology in 1997. Previous posts included:

Since 2010, Professor Cheke has been a visiting professor at the Department for Infectious Disease Epidemiology in the School of Public Health at Imperial College London (www3.imperial.ac.uk).

Professor Cheke's research interests concern understanding the functioning of ecological systems. Most of his research concerns tropical environments in Africa, involving the biology and control of vector-borne diseases and agricultural pests, often including mathematical modelling. As an ornithologist and entomologist, Professor Cheke specialises in vectors of onchocerciasis ('river blindness') on migrant agricultural pests such as locusts, armyworm moths and red-billed quelea birds, and on mathematical models of integrated pest management. His research has involved fieldwork in numerous countries in western, eastern and southern Africa. In addition, he has recently been working on mosquito ecology in the UK.

His major achievements include:

Professor Cheke has published 250 articles on biological topics, two books (Cheke, R.A. and Walsh, J.F. (1996) The Birds of Togo. British Ornithologists' Union Check-list no. 14. British Ornithologists' Union, Tring; and Cheke, R.A. and Mann, C.F. (2001) Sunbirds. A Guide to the Sunbirds, Flowerpeckers, Spiderhunters and Sugarbirds of the World. Christopher Helm, A&C Black, London). He has edited three sets of conference proceedings, one of which was for a Royal Society discussion meeting in 1989.

Professor Cheke devised the NRI MSc programme in natural resources and managed it as programme leader in its initial years. He has supervised more than 20 PhD students.

In an increasingly populous and warming world, it is imperative to maximise crop production and minimise health risks, whilst simultaneously protecting natural environments. To achieve these goals it is necessary to understand how living systems function in order to decide which of a suite of possible interventions are best. However, the inherent complexity of living systems requires a systems approach to cope with counterintuitive phenomena and to predict how biological systems will respond to different stresses. Hence the need for quantitative analyses of field data and modelling, both theoretical and empirical.

These approaches, which have underpinned much of Professor Cheke's research, have led to successes in control programmes against human parasitic diseases and migrant pests and have shown that integrated pest management (IPM) is preferable to conventional pest management on both economic and environmental grounds.

Future work is needed to link more field data on pests and disease vectors, which are currently controlled using IPM methods, with mathematical models to devise the most appropriate control strategies. It is anticipated that progress towards these aims will be made in a new project, awarded to Professor Cheke's collaborators, Dr Juhua Liang and  Professor S. Tang of the Shaanxi Normal University, Xi'an, Peoples' Republic of China, which began in 2018 on Modelling multi-scale pest control systems with hormesis and homeostatic transitions, funded by the National Natural Science Foundation of China (NNSFC).

Taking the bite out of wetlands; managing mosquitoes and the socio-ecological value of wetlands for well-being

Interest in the health and well-being impacts of wetlands has increased in the UK, in the context of both short and long term responses to extreme weather events and climate change. This is reflected in the UK Wetland Vision that identifies a need to make wetlands more relevant to people's lives by better understanding and harnessing the benefits provided by naturally-functioning rivers and wetlands. Expansion of wetlands can bring many benefits but it can also increase potential for mosquito-borne disease. There is a lack of knowledge about the consequences of wetland expansion for disease risk. This knowledge gap opens up space for speculation in the press and media about the perceived problems of 'killer' mosquitoes spreading across England, which can in turn fuel community unease and opposition to wetland creation and expansion. A key concern of the project is, therefore, to develop ecological interventions and guidance for diverse end-users to minimise mosquito-related problems, framed within and facilitated by a broader understanding of wetland value as impacted by mosquitoes. The potential contribution of wetland development to social and economic wellbeing envisaged in the UK Wetland Vision could be severely constrained by a failure to adequately address the risks imposed by mosquitoes and biting insects.

The overall aim of this project is to show how positive socio-cultural and ecological values of wetlands can be maximised for well-being and negative attitudes reduced. Management interventions for use by Public Health England and general guidelines are being be developed to limit the damaging effects of mosquito populations and enhance appreciation of the ecological value of mosquitoes in wetland ecosystems. The project has increased understanding of wetland environments to demonstrate how ecological interventions embedded in a broader understanding of wetland valuation can deliver well-being benefits to a broad range of stakeholders. There are four main objectives: 1) Development of a new conceptual place-based ecosystem services and well-being framework for understanding the impact of interventions and wetland values. 2) Exploration of the value of wetlands and mosquitoes in twelve case study locations. 3) Production of guidelines for valuing wetlands and managing mosquito populations to enhance the value of British wetlands for well-being. 4) Production of a place-based narrative on the socio-cultural, economic and ecological value of wetlands in British Society in the early years of the 21st Century.

Together with Prof G.Gibson and Dr F. Hawkes, Prof Cheke has been participating in ecological surveys at six of the 12 study sites to determine which mosquito species are breeding in the areas and where and when different species occur as adults. Particular attention has been paid to suspected invasive species which pose potential threats as vectors of emerging diseases such as West Nile virus.

Gnatwork (2017-2019) aims to create and maintain a community of researchers based on shared technical difficulties across biting midges, sandflies and blackflies. Through pump-prime funding of small-scale studies and hosting of annual training workshops, Gnatwork aims to create a more resilient research base for these three neglected vector groups. Prof Cheke participated in a workshop in Bangladesh during 2018 and another is planned to take place in Brazil in 2019

With the development of pesticide resistance, a paradoxical phenomenon often occurs whereby the stronger the control measures the more serious are subsequent outbreaks of pest populations. Thus, pest populations may achieve higher steady states than before the control measures, analogous to hormesis outcomes in drug toxicology. Therefore improper control measures against pests (including both agricultural pests and vectors of diseases such as mosquitoes) may lead to severe outbreaks rather than the desired control. In order to restrain the evolution of pesticide resistance and avoid such paradoxical effects happening, it is necessary to understand the mechanisms and dynamics of pest resistance development and ascertain the threshold conditions for the occurrence of paradoxical results. So, in this project, it is planned tol devise dynamic equations of the evolution of pest populations inducing resistance and the evolution of genetic resistance. Mathematical methods will be used to analyse the process of Wolbachia matrilineal inheritance and cellular affinity in mosquitoes, study new methods of modelling pest populations with discrete generations and their control and develop a multi-scale system with equations combining descriptions of pest populations and their genetic evolution. Together with mathematical modelling and analyses of experimental data, statistical and numerical analysis, the dynamic behavior of the multi-scale system will be studied and the internal relations associated with the development of pest resistance analyzed together with the time, the intensity and effectiveness of implemented pest control strategies in relation to the key factors controlling the above relations. The ultimate aim is to design optimal pest control strategies by determining the parameter space which permits successful control by avoiding paradoxical pest resurgences.

This project investigated, using molecular ecology and mathematical modelling, whether the proportion of blood-meals taken on humans by vectors (the human blood index or HBI) depends on vector and host density. Current models of vector-borne diseases (VBDs) assume that the value of the HBI is fixed in a particular environment and therefore predict that the case reproduction number (Ro) of these infections varies linearly with vector abundance. A non-linear relationship would imply that efforts to control VBDs by anti-vectorial measures could have unforeseen effects on the ability of the parasite to invade and persist in host populations.

Fieldwork was conducted at seven sites in Ghana using baited and unbaited trapping methods to catch adult blackflies. Different cytospecies were identified morphologically and by DNA methods and any residual blood-meals in parous flies were identified by DNA analyses. The flies were found to be biting a variety of hosts, in addition to man, such as cattle, goats, sheep, pigs and dogs (Lamberton et al. 2016). All cytotaxonomic identifications of larvae for Ghana collected during a 40-year period, including for new samples obtained by the project, were analysed with regard to changes in the distribution and abundance of the various cytoforms recorded (Post et al. 2013).