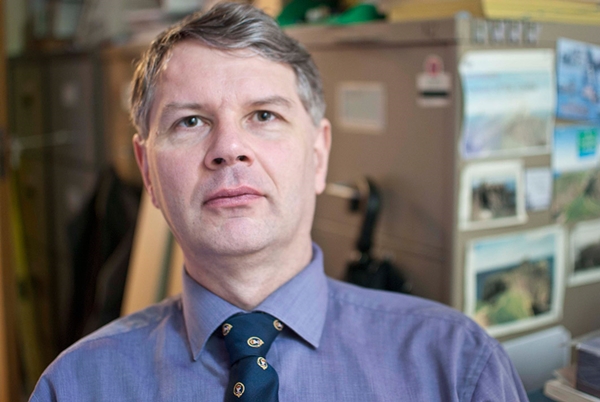 Dr Burt is a Biometeorologist, with over 35 years experience in areas of windborne dispersal of organisms and particulate material through the atmosphere, the influence of topography on airflow, organism responses to climate change, and palaeoclimates and palaeoenvironments. He joined the Natural Resources Institute as a Special Research Fellow in January 1989 and was appointed Principal Scientist in 1991. He was previously Deputy Head of the Environmental Sustainability Group (August 2001 to December 2002) and Acting Head of the Group (January – March 2003).

Dr Burt is Programme Leader for the BSc Environmental Science and BSc Physical Geography programmes, and also for the MSc Natural Resources (By Research). He lectures on aspects of introductory meteorology to first-year undergraduates, as well as on applied meteorology/climatology, ecology and climate change in various undergraduate and postgraduate courses (see below). He is the former Programme Leader of the MScs in Agriculture for Sustainable Development and Sustainable Environmental Management. His research in aspects of meteorology/climatology, airborne dispersal and palaeoenvironments are further supported through the supervision of MSc, PhD and postdoctoral students. He is a Fellow of the Higher Education Academy (FHEA) and obtained the Greenwich Certificate in Academic Programme Leadership (GCAPL), with associated Membership of the Institute of Leadership and Management, in 2018.

Dr Burt was the Editor of the Royal Meteorological Society journal Meteorological Applications from 2005 to 2019 and is a current member of the editorial board of the European Journal of Plant Pathology. He acted as an Expert Reviewer for Working Groups I and II for the IPCC 5th Assessment Report and is currently involved in a similar role for Working Group I for the 6th Assessment Report. He has been involved in investigations of the dispersal of airborne material within the Medway, Kent, area and has acted as an Expert Witness on airborne particulate dispersal at local planning enquiries. He was an expert reviewer for DFID’s Climate Impact Research Capacity and Leadership Enhancement (CIRCLE) programme Visiting Fellowship Scheme (2015 – 2017) as well as supervising several research students working through that scheme.

He was a member of the organising and scientific committees of the 24th Annual Conference and Exhibition of the Remote Sensing Society, held at the University of Greenwich in September 1998, and co-editor of the conference proceedings. He was also involved in the organisation on the Third European Symposium on Aerobiology, held at University College Worcester in August 2003, as a member of the organising and scientific committees, co-editor of the symposium abstracts and invited Chair of the Climate Change session. He is the President of the British Aerobiology Federation.

Dr Burt's research activities can be divided into four main categories: biometeorology and bioclimatology, with emphasis on insect aerobiology and palaeoenvironments; pollen and spore aerobiology; investigations of the atmospheric dispersal of pollutants, and general meteorology/climatology.

Biometeorology, with emphasis on insect aerobiology

Initial, novel, investigations demonstrated that small temporal (few minutes) and spatial (metres to tens of metres) thermal convective structures in the atmosphere are important in the concentration and dispersal of small insects, especially those such as aphids and thrips which feed on cereal crops. Conventional monitoring equipment does not normally operate at these resolutions, hence the impact of such structures in creating non-randomness in the arrival of airborne insects, and in epidemiological studies, may have been underestimated. This was verified for other species in field investigations overseas.

Many insect pests fly at night. Studies of the role played by nocturnal wind systems in dispersing and concentrating such insects drew together material on this subject for the first time, as an aid to insect forecasters and pest controllers identifying likely areas of pest insect outbreaks.

On larger spatial and temporal scales, Desert Locusts have the capacity to migrate across the Atlantic Ocean, a feature of their behaviour which takes them outside their normal ecological ranges and which is not predicted through laboratory investigations of flight capacity. Historically, however, such migrations are rare, and future movements are unlikely to become of economic importance, even under proposed climate change scenarios. Such migrations suggest that the arrival of Old World species may have affected the speciation of New World grasshopper species. The results of this work also demonstrated the problems of transferring laboratory results directly in to the field (which have informed other aerobiological and ecological studies).

Development of a predictive model relating cloud-top temperature to rainfall in the Sahelian region of Mali, and the use of satellite remote sensing to monitor it, has enabled local plant protection teams to target their pest control activities more efficiently and economically over the vast areas where the pest grasshopper Oedaleus senegalensis is endemic, thereby reducing the impact of crop losses on the livelihoods of subsistence farmers in the area.

The discovery of the degradation of the ozone layer over Antarctica, and its subsequent impact on the health and well-being of animals (including man) in the southern areas of South America in the 1980s, led to a major initiative to develop accurate ultra-violet (UV) radiation forecasting tools. Such forecasts have enabled people to be made aware of the times of higher UV radiation levels, thereby reducing human and livestock exposure to physiologically-damaging levels of radiation.

Mycosphaerella fijiensis is the fungal spore causing Black Sigatoka disease in banana and plantain. The disease is of major economic importance to subsistence farmers in developing countries, causing significant reductions in fruit quality and yield. The results of five years of research in Central America and Africa on aspects of the airborne dispersal and epidemiology of this pathogen resolved a number of previously unclear aspects of its behaviour. Although spreading worldwide, the results from this investigation showed that the reasons for the disease not becoming well-established and destroying the subsistence-based banana industries of the Caribbean is that periods of exposure to sunlight (as normally experienced by windborne spread of spores from diseased plantations in the Americas) kills the spores before they reach potential host plants, and also that proportionally low numbers of spores enter the atmosphere from infected plants. Consequently, continued adoption of plant quarantine and disease control methods in the Caribbean should prevent the spread of this disease. Current investigations of long-distance dispersal of pollen and spores, and also the impacts of climate change on dispersal patterns, have evolved from this work, and also link to the airborne pollution studies outlined below.

Investigations of the atmospheric dispersal of pollutants

In recent years Dr Burt has been involved in a series of investigations which have started to address the complexities of topographic airflow and the potential for pollution transport in the southeast of England, at regional and transboundary levels. No previous investigations of the relationship between airflow and topography, and the influence of these on the dispersal of pollution, have been undertaken in this region. Preliminary results have shown the complexity of the airflows in the region, the relationship between local and synoptic scale flows and why existing physical models of pollution dispersal (relating to dispersal within the lowest 1500 m of the troposphere) were not reflecting reality. A greater emphasis should be placed on integrating measured data from monitoring stations, in association with field observations.

Understanding and predicting future climate change impacts is enhanced through identifying such changes in the past and considering their likely occurrence in the future.  The sunken forests of the Thames Estuary and south Cornish coast provide a wealth of data on palaeoenvironments, and preliminary studies are investigating how these evolved and the impact of environmental change (including climate change) upon them.

Dr Burt is an External Examiner for two MSc programmes at Newcastle University.

Dr Burt has completed major (as Project Leader/Manager and researcher) to assess the role of the wind in the movement of the plant pathogens causing Sigatoka diseases of banana and plantain and the use of satellite imagery to identify likely areas of the eclosion of pest grasshoppers in relation to rainfall in the Sahel (particularly Mali), as well as studies of insect movement and dispersal in association with wind systems in the lower atmosphere. Other investigations have involved the use of satellite remote sensing as an aid to agro-ecological monitoring and in the collection and analysis of atmospheric profile (temperature, water vapour and ozone) data.

Plus ~70 other peer-reviewed papers, conference proceedings and reports.

Responsibilities within the University
Awards and External Recognition
Contact Form