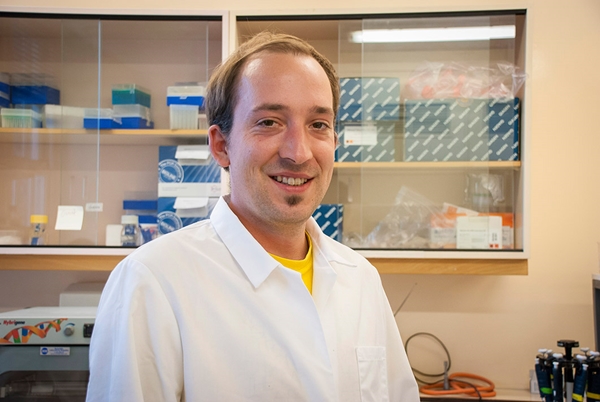 Dr Moritz Bömer completed his Diplomingenieur (equivalent to MSc) in Biotechnology at the University of Münster, Germany in 2007, gaining extensive knowledge and experience in molecular biology techniques. Moving to UK in 2007, Dr Bömer has initiated his career in scientific research in January 2008 at the Royal Holloway University of London (RHUL), working as a Research Technician on a BBSRC funded project with the aim to establish the link between jasmonate signalling and the cell cycle. In September 2009, he was awarded the PhD SouthWest London Academic Network Studentship at RHUL. The project based within the department of Plant Molecular Sciences under the supervision of Dr Alessandra Devoto. The title of the PhD project was "Investigation on the Mechanism of Action of Jasmonates on Growth and Metabolite Production in Arabidopsis and their Potential Application to Cancer Therapy". During 3 years, Dr Bömer employed transcriptomic, metabolomic and proteomic approaches to gain new insights into how jasmonates (JAs) can stunt plant growth under stress conditions, and more specifically how JA-signalling regulates the plant cell cycle (Noir and Bömer et al., 2013). Additionally, Dr Bömer developed a novel bioassay for the identification of JA-regulated secondary metabolites with potential anticancer activity. During his PhD, Dr Bömer established effective relationships and highly productive collaborations with Prof Nick Smirnoff at the University of Exeter and Dr Amanda Harvey at Brunel University. Moreover, in 2010 Dr Bömer presented his work at the 21st International Conference on Arabidopsis Research (ICAR) in Yokohama (Japan, June 2010) and also took part at the BBSRC/Tokyo Embassy International Workshop "Inference and Modelling of Regulatory Networks in Multicellular systems" at the RIKEN institute (Japan, June 2010). Following his PhD, Dr Bömer worked as Postdoctoral Research Assistant in Molecular Plant Pathology with Dr Laurence Bindschedler at RHUL on the EPSRC funded project 'Silencing Targeted Effector in Planta (STEP)' with the aim to silence effector proteins from the obligate fungal pathogen barley powdery mildew based on the host induced gene silencing (HIGS) approach. In October 2013, Dr Bömer joined the Natural Resources Institute, University of Greenwich, as a Research Fellow on a project that aims to identify activatable endogenous pararetrovirus (EPRV) sequences in yam breeding lines.

Moritz Bömer is currently committed on the identification of activatable endogenous pararetrovirus (EPRV) sequences in yam breeding lines. Yams are an important food crop in many tropical and sub-tropical countries, particularly in West Africa. Yams are propagated vegetatively through their tubers, which lead to an accumulation of tuber-borne diseases in farmers planting material and subsequent serious crop yield losses. The economically-important tuber-borne diseases are caused by viruses, and the only effective method of controlling these virus diseases is to use virus-free planting material (clean 'seed' yams). In addition to the normal virus infection process, some badnavirus species appear to be integrated into the host genome of some yam species. Integrated badnavirus sequences are termed 'endogenous pararetroviruses' (EPRVs). Of particular concern is that many EPRVs have been shown to be 'activatable', i.e. able to replicate and initiate virus infections de novo. Activation is considered to be triggered by the epigenetic modifications that occur during hybridization of parental genomes as well as environmental stresses. Therefore it is essential to improve existing diagnostic tools for broad-specific detection of viruses and EPRVs. The yam lines containing 'activatable' EPRVs will need to be removed from the multiplication process as they cannot be 'cleaned' of badnaviruses and will pose a serious long term threat to the genuinely virus-free yam lines.