This year, Bristol played host to the annual Post Graduate Forum of the Royal Entomological Society, an event organised by post-graduate students, for post-graduate students. Designed to give participants a gentle introduction to the world of scientific presentations, the two-day event provides an ideal platform for post-grads to network, share ideas and have some fun. Manuela Carnaghi, a member of the Society and a PhD student at NRI, took on the challenge of organising this year’s symposium and says the experience was a good one.

“I’ve been a representative for the Royal Entomological Society for the past year, and as part of the role I had to organise this conference which took place on the 20 – 21st Feb in Bristol. The aim is to provide the post grads with a relaxed environment where they can present their work, either with a talk, or a poster – they can do either or both – depending on how they want to enhance their presentation skills. We also invite four speakers who are established researchers in their field, which gives the conference a professional feel, and a true insight into how present to each other in academia.

We aim for gender equality – this year we had two female and two male speakers, and we try to cover a lot of different areas within the insect topics. NRI’s Dr Sarah Arnold presented her work on pollinators and bees, and we also had people from the vector diseases and the evolutionary side and some blue-sky science.

There were about forty participants per day; it was a really friendly atmosphere and we enjoyed helping with the networking. To begin with, it felt quite formal but as soon as people started to get to know each other and got talking about their research, everyone got very animated and they bonded quickly!

Contact details were exchanged and it’s a brilliant way of meeting other people in the insect community. Often we find that studying insects isn’t seen as exciting as say, 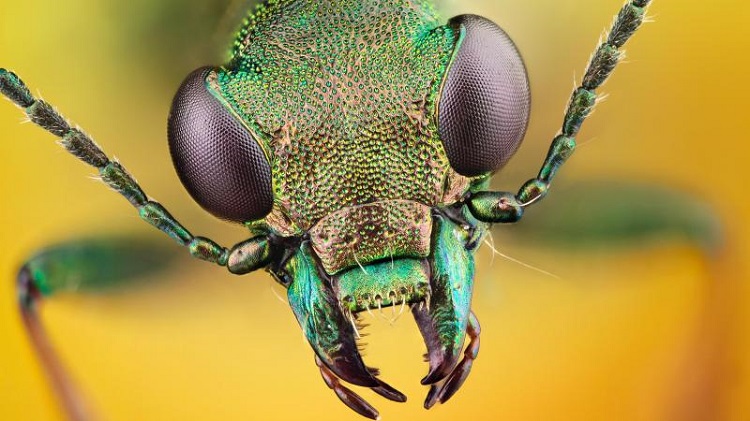 mammals, which are generally more attractive to people. Insects don’t get as good press which is a shame because they’re so important!

There’s an enormous number of species compared with any other vertebrates, and insects play an important role at every level of ecology; for example, they clean up the soil and reduce waste. They pollinate crops and can also parasitize other insects, making them very useful as biocontrol agents. As some insects can also be vectors (transmitters) of many parasites which cause human disease, the study of insects is extremely important in order to reduce the burden of vector-borne diseases.

Conferences like this are important at all levels of the scientific community as they give participants an introduction into the research world and how their scientific work should be presented. This year from NRI, two post-grads at the beginning of their PhD careers – Laura Haynes and Harrison Lambert – attended and each presented a poster. They didn’t have any data as such to present, but I am sure that the experience of being there and seeing how talks are given and how to make a poster was an incredibly helpful introduction for them.

For those in their 2nd or 3rd year of their PhD, it’s a great opportunity for networking, and for the 3rd to 4th years it’s good for enhancing your CV, as you are given the opportunity to present both a talk and a poster. There’s an added bonus of getting your name known by the Entomological Society, which is very useful for those that wish to work on outreach projects.

My own career so far has been quite varied. I did my first degree in biology and my Master’s in parasitology. After that I worked for a year in Mozambique as an assistant project manager in a study that aimed to reduce malnutrition in children under five. Even though I was always interested in parasites, my experience in Mozambique really opened my mind to tropical diseases like malaria and intestinal parasites; that’s why I would like to work in the future on neglected tropical diseases in general. Back in Italy, my home country, I taught general science subjects (biology, chemistry, anatomy) in high school for a year, then I started here at NRI as a PhD student.

This conference is not just a fantastic opportunity for networking and presenting your work, it’s also a lot of fun. I organised a pub quiz and a dinner where we had a bit of time to relax and talk about life, and on the Friday afternoon, I organised a tour of the botanic gardens. It’s not just a conference, it offers so much more; I would definitely do it again.”