Critters, creepy-crawlies, bugs, scuttlers, beasties – just a few of the many nicknames given to our insect friends. This year for National Insect Week, the theme is ‘little things that run the world’ and the Royal Entomological Society is asking all of us to notice and appreciate insects just that little bit more.

With many of us unable to go out much during lockdown, it’s the perfect time to do some entomology (the scientific study of insects) at home. We asked seven of NRI’s insect experts to tell us about their favourite insects, one for each 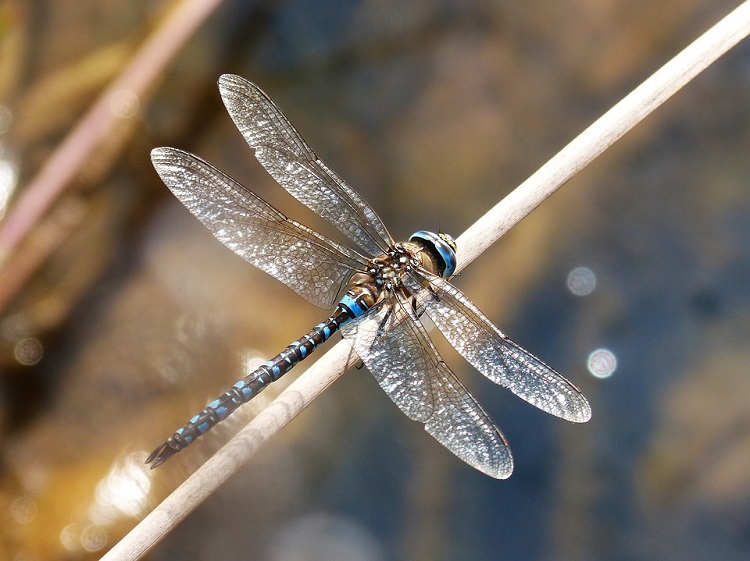 day of National Insect Week, and convince us why we should rate them too.

The dragonfly is the favourite insect of Dr Mandela Fernandez-Grandon, NRI Research Fellow in Entomology. “They’re really impressive”, he explains, “observing them feels like a glimpse into the distant past. Dubbed as ‘living fossils’ they have changed very little in over 250 million years. It’s sad that a 2012 study showed that one-third of UK species were in decline, with human activity playing a substantial role”. 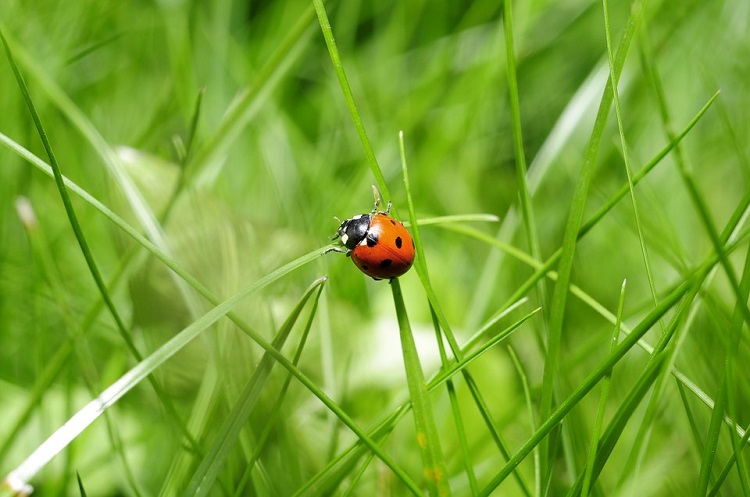 Many insects have four wings, or structures adapted from four wings. Dr Fernandez-Grandon is impressed with the fact that members of this group are the only ones to be able to operate each wing independently allowing for impressive manoeuvres in flight! He adds, “During the carboniferous era, some dragonflies had a wingspan over 70 cm which would have been a sight to behold. One of the tiny (4 cm long) modern species holds the record for the longest insect migration at 14-18,000 km.”

Dr Frances Hawkes, a Senior Research Fellow and Behavioural Entomologist, picked the ladybird as her number one insect because they reminded her of being a kid and watching them take off from the tip of her finger.

Ladybirds, she says, are “pretty cool all-rounders” in that they have a wonderful variety of colours and patterns on their forewings and are useful to have in the garden because they will eat pests like aphids.

Dr Hawkes is enthralled by watching their hind wings open in readiness for flight, “it is quite amazing – the wings are several times the size of the ladybird, and very thin yet powerful enough to support the insect in the air. Ladybirds can reach flying speeds of over 30 miles an hour but I’ve never actually seen one going that fast!”

The ladybird’s ‘superpower’ is when they feel threatened, they release a small amount of smelly haemolymph (insect ‘blood’) to warn off predators. This is called autohaemorrhaging or reflex bleeding.

The Harlequin ladybird, introduced to the UK to control plant pests like aphids, might be able to outcompete the native ladybirds for resources and Dr Hawkes says we should all appreciate the ladybird because apart from all the above 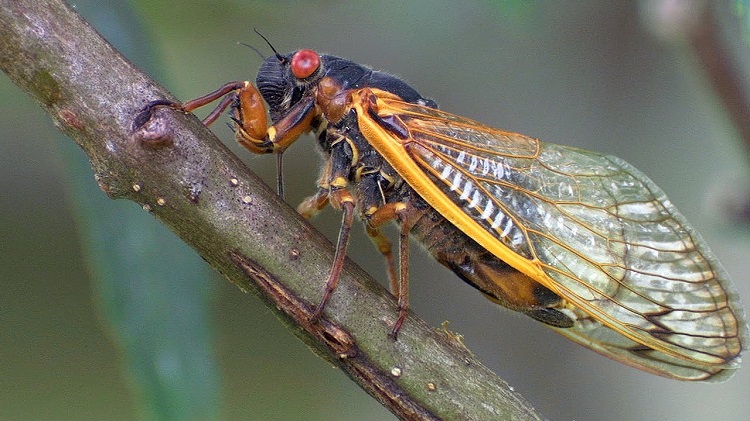 reasons, they are a very recognisable insect and you can find them almost everywhere in the UK. “In my opinion, they are also very cute!”

The periodical Cicada, of the Magicicada genus, topped the list for Harrison Lambert, a PhD student at NRI. He says “most cicada have relatively long life spans for an insect and spend a lot of it underground as nymphs. In the case of Magicicada this is up to 17 years!” Unlike other Cicada species, Magicicada species all emerge as adults synchronously on a spring evening of their 13th or 17th year, in groups called broods.

Harrison is rather taken with their appearance and the fact that the males also produce really beautiful songs for various reasons, although mainly as a mating call. Each species has its own distinctive melody and is so loud that if close enough, can cause permanent damage to human ears! The Cicada actually “turn off” their own ears in a way to prevent damage to themselves – clever.

Their superpower, according to Harrison, is mathematical in that a brood emerge all at once on prime numbered years. “It’s believed that the strategy developed so they could overwhelm predators with huge numbers, so many that they can’t possibly all be eaten. But more importantly, they emerge on their 13th or 17th year – prime numbers – which would also reduce exposure to potential predators with cyclical lifecycles and behaviours.” 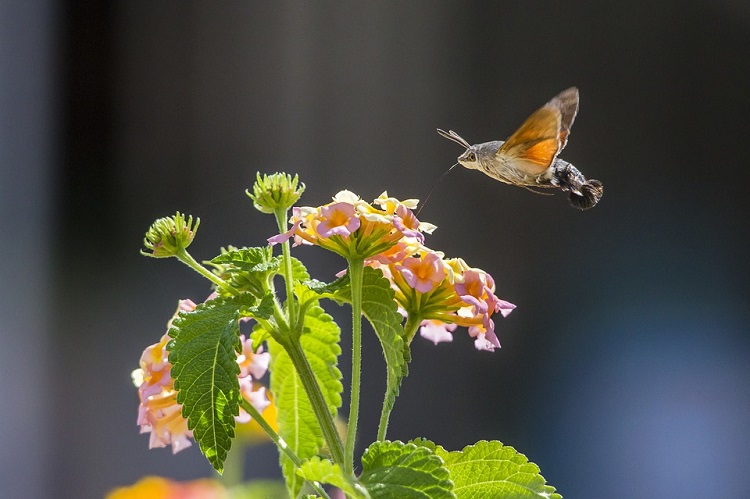 “For example, if a predator has a six-year population cycle that rises and falls, those Cicada which emerge every eight years would be exposed to the highest predator populations much more frequently than those which emerge very seven years.”

Dr Victoria Woolley is a Post-doctoral Research Fellow and she’s a big fan of the not-so-humble moth, especially the spectacular hummingbird hawkmoth, which as you can see from the picture is very unusual as it looks very much like a hovering hummingbird. Dr Woolley was so mesmerised after witnessing one feeding on a flower, that it’s now her number one insect.

All moths, she says, are important for a healthy ecosystem as they are pollinators and provide a food source for insectivorous animals such as birds and bats. Victoria explains their appeal: “I think moths are very underrated, with public attention in the UK often focussing on butterflies. The hummingbird hawkmoth has a very fast wingbeat – 80 wingbeats per second, faster than some hummingbirds – that allows it to hover while it feeds on nectar.”

Dr Woolley explains why we should all look out for moths, adding that their number in the UK is in decline: “while the hummingbird hawkmoth is my favourite moth, I would 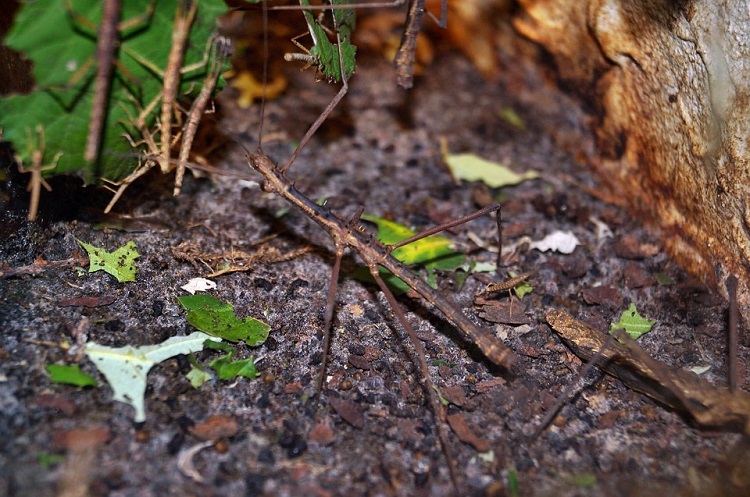 encourage everyone to have a look for moths in their garden or local park. There are a number of moth species that are active during the day so you should be able to spot some!”

Manuela Carnaghi, another of NRI’s PhD students chose Phasmatodea, more commonly known as stick insects and leaf insects, because of their perfect camouflage. Manuela says: “they are incredible, they seriously look like sticks and leaves and sometimes even their eggs are well camouflaged and look just like plant seeds. Some species can change colour to match their background and others, if attacked by a predator, will shed some of their own legs as a decoy to allow them to escape!” 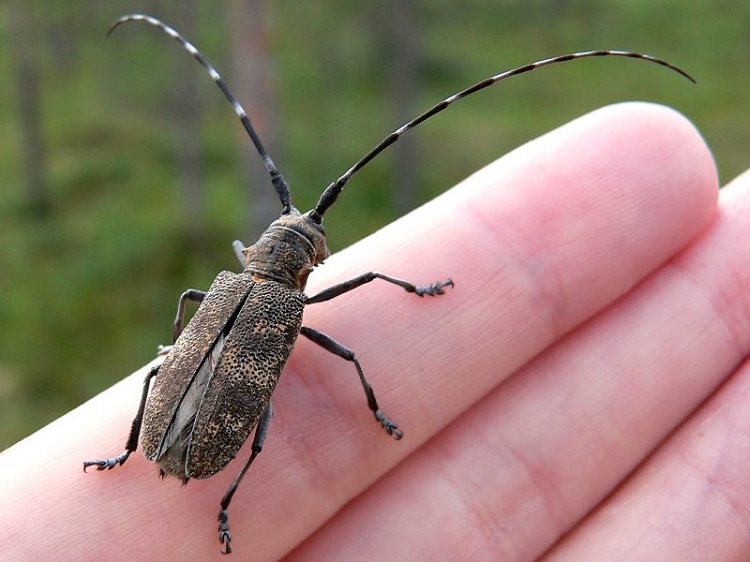 Manuela also likes the way stick insects, when threatened, release a smelly liquid that repels predators and some of the scarier varieties can even produce a toxin that can cause temporary blindness and severe pain to humans! But she hastens to add that they are not at all aggressive and are often kept successfully as pets.

The “handsome” pine sawyer beetle, Monochamus galloprovincialis is Professor David Hall’s choice and has been for 15 years since he first collaborated with a Spanish colleague and discovered that the insect was a “goldmine” for chemical ecologists like him.

Professor Hall explains: “Monochamus is attracted to pine trees, particularly those that are weakened by some stress, for example by attack from other insects. So Monochamus can ‘eavesdrop’ on the pheromones of other wood-boring insects that weaken the tree and make it more tasty to Monochamus. The beetle does minor damage by feeding on pine trees, but it can also carry a tiny worm, pine wood nematode (PWN), which can destroy pine trees. PWN was accidentally introduced into Portugal 20 years ago and threatened to destroy European pine forests. However, it has not really spread significantly beyond Portugal due to the work of European scientists including our team.”

You won’t see many pine sawyer beetles in the UK – yet. But due to climate change it remains on the ‘watch list’ for ecologists. 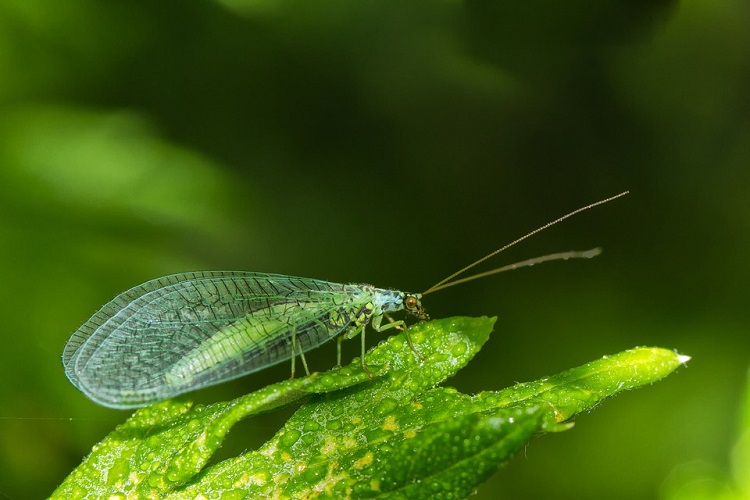 PhD student Christina Conroy completes our list of NRI’s favourite insects with her choice of the Green Lacewing Chrysoperla carnea, whose larvae, she says, are the most interesting. “The larvae are an underappreciated beneficial insect and are important predators of soft body insects like aphids. Larvae are known as 'Aphid Lions' as they attack with large, curved, hollow mandibles and can eat up to 100 aphids a day! The adults, in contrast, are weak fliers and generally feed upon nectar and pollen.”

But Christina explains that the adults are fascinating too as they have 'ears' at the base of their wings, allowing them to hear bats’ echolocation, and avoid getting eaten.

We hope you’ve enjoyed reading about our ‘top insects’ to celebrate National Insect Week and that you managed to spot some for yourselves too!