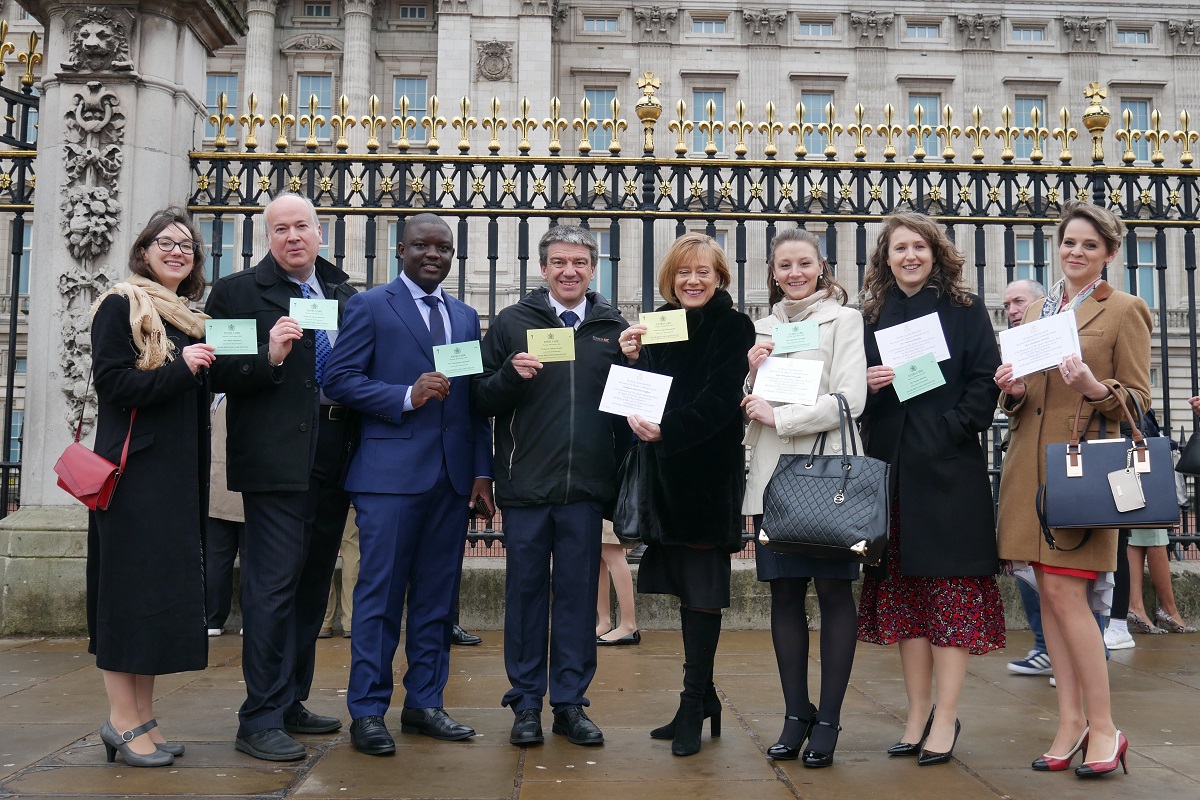 Green entry card and passport at the ready, I showed the guard my credentials and was waved inside the gates of Buckingham Palace, along with our group and the other winners of the Queen’s Anniversary Prize for Further and Higher Education. We’d arrived earlier that cold, grey London morning, happy that it wasn’t yet raining as we took photographs outside the railings of the Palace. In our group were Professor Jane Harrington, Vice-Chancellor of the University of Greenwich, Professor Andrew Westby, Director of NRI, NRI staff Professor David Hall, Professor Steven Belmain, Dr Frances Hawkes, and I (Gillian Summers), and PhD students Christina Conroy, Christopher Imakando, and Manuela Carnaghi. Inside the Palace, we were joined by the Chancellor of the University of Greenwich, Lord Boateng.

What exactly is a Queen’s Anniversary Prize and why is this an important achievement for NRI and the University? 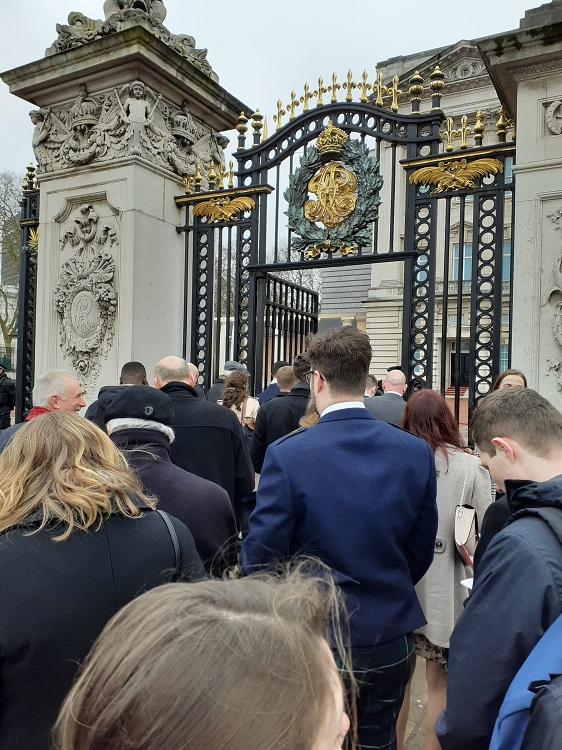 The Queen’s Anniversary Prizes were established to mark the 40th anniversary of The Queen’s accession to the throne in 1992 and in appreciation of her many years of service as Head of State. Managed by the Royal Anniversary Trust, an independent charity, the Prizes are open to all UK universities and colleges of further and higher education and recognise and encourage outstanding work in any field. Part of the British Honours system, which is a means of rewarding bravery, achievement, or service to the United Kingdom and the British Overseas Territories, the Prizes are the highest honour awarded to higher and further education. In this respect, they can be considered a ‘knighthood for research’. In contrast to other honours which are bestowed on individuals, the Prizes are conferred on the institution as a whole. 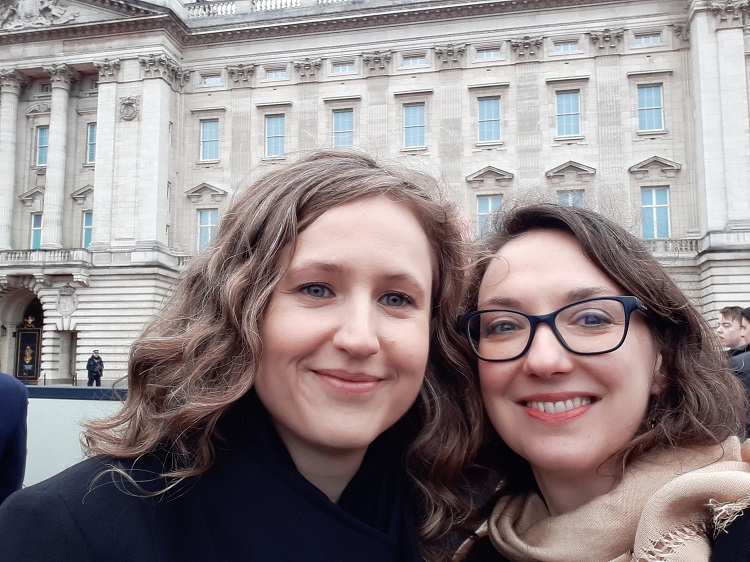 So there we were, on the other side of the Palace railings, looking back at the tourists trying to get the best selfie or a good photo of the changing of the guard. As we made our way through another gateway to a courtyard beyond, Frances and I carefully navigated the loose red gravel in unaccustomed heels. “This is surreal,” we agreed as we contemplated the gilded adornments of the Palace’s exterior before stepping onto the red carpet that would take us inside.

Impeccably uniformed guards welcomed us at every turn, politely reminding visitors that no photographs were allowed inside the Palace, as we took in our surroundings. A sweeping staircase on our left carpeted in deep red led to galleries beyond, golden woodwork embellished details on walls and ceilings, along with priceless antique paintings, chandeliers, flowers – in a word it was – palatial, and definitely more so than it looks from the outside. Again, I had to pinch myself – I was inside Buckingham Palace!

It might have been easy to get carried away with the pomp and circumstance of the day, but as Frances and I chatted, we reminded ourselves how NRI’s winning research is ultimately designed to help improve the lives of those living in poverty, dealing with challenges that many will never experience first-hand, like food insecurity, being vulnerable to dangerous diseases spread by rodents or insects, or battling with serious pests to uphold our livelihoods. Importantly, the Queen’s Anniversary Prizes recognise innovative research that delivers practical and substantive benefit in the wider world. 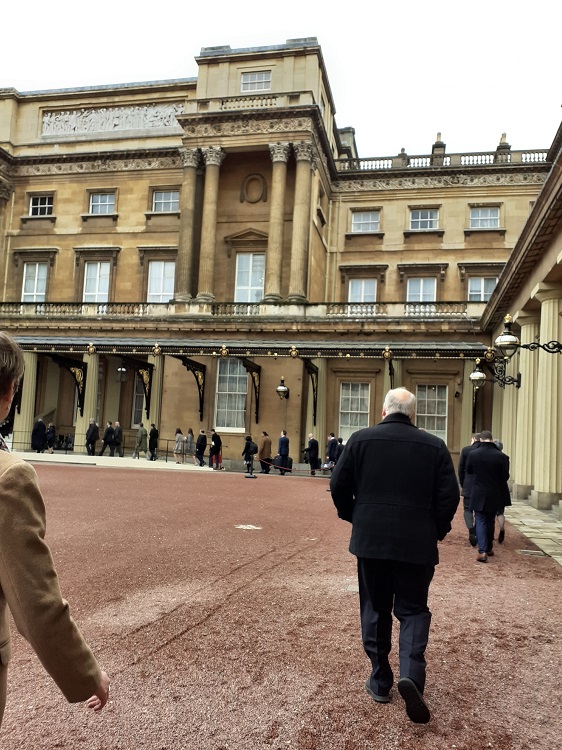 After leaving our coats in the allotted cloakroom, we picked up our name tags and proceeded to the Ballroom. As a group, we were shown to our seats on a red satin ‘banquette’. To the right was a pair of golden thrones, while to the left, a smartly dressed RAF band played light orchestral music from a balcony. This is the venue where all British Honours are bestowed on their recipients. Before long, a royal guard requested our attention as he read out the rules of etiquette for the event – when we should stand, sit, how we should address the Their Royal Highnesses, Prince Charles and the Duchess of Cornwall and the protocol for shaking hands (only if they shake yours).

The Vice-Chancellors and Professors who were to receive the Prize paraded through the Ballroom and took their seats towards the back, whilst the Chancellors took their seats at the front. The national anthem sounded and all the guests stood to receive the royal party. Prince Charles then asked the assembly to take a seat, and the prize-giving began, with the name of each institution being announced, along with a description of the winning research, and the names of the academics receiving the gilt medallion and the scroll. We were number seven in the list, so we did not have long to wait before Professor Harrington and Professor Westby were conversing with the royals, who knew an impressive amount of detail about our research in sustainable pest management and its impacts. 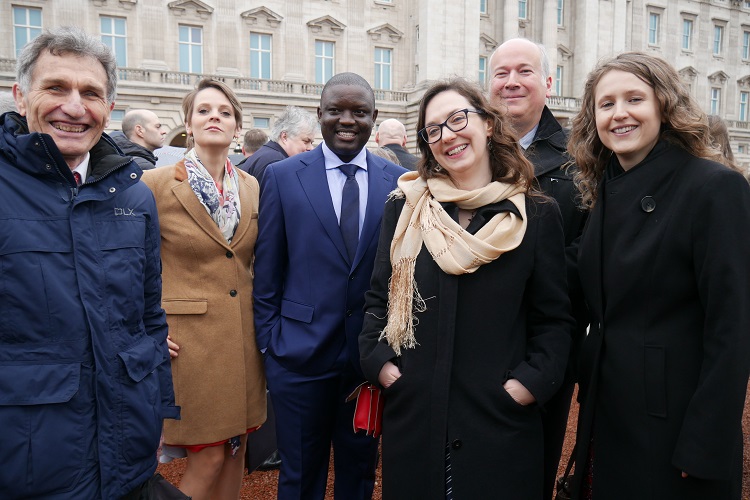 The prize-giving concluded, the assembly adjourned to the Picture Gallery, where our group gathered by our allotted number. We were treated to drinks and tiny yet delicious canapes as we chatted with our Chancellor, Lord Boateng, who carefully reminded us all of the correct protocol and prepared us for the royals who were making their way down the gallery. Then it was our turn, and the Duchess of Cornwall was introduced to each person in our party by Lord Boateng. Manuela and Christina told the Duchess about their PhD research on insects, and Christopher spoke about rats; Steve, sporting a tie resplendent in rodents, spoke about sustainably controlling these destructive pests, and David spoke about managing damaging horticultural pests using pheromones. All the time we were surrounded by a team taking photographs and videos of the proceedings. I remember feeling quite nervous as I listened to Frances describing her work on mosquitoes and trapping methods; after all, it isn’t every day you meet a member of the royal family. Lord Boateng put me at ease as he introduced me to the Duchess, we shook hands, and I was able to explain more about my work and how Communication for Development seeks to create a dialogue between communities, scientists and other stakeholders who are working together to develop innovations, in order to improve the sustainability of the solutions. It seeks to create the right messages for other audiences, including funders, other researchers and policy makers. 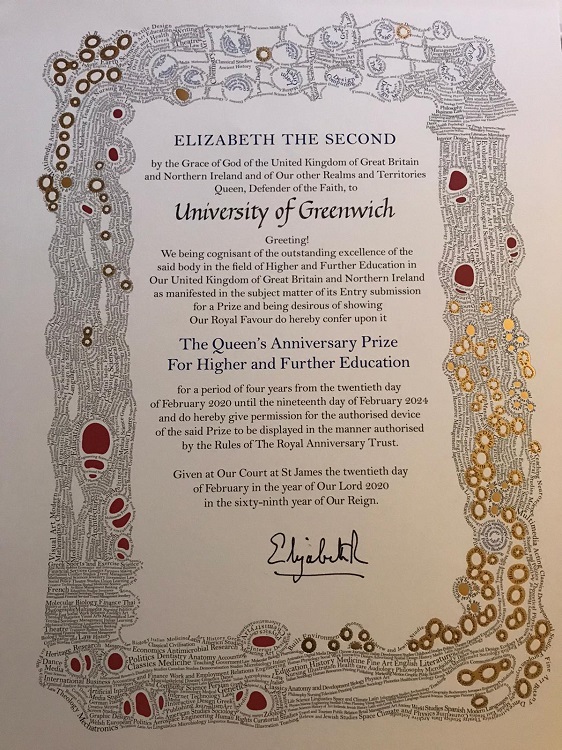 After that we all relaxed and chatted with members of the Royal Anniversary Trust about NRI’s research and our experience of the Prize. It was only then that I fully appreciated the process of selecting the prize-winners. Almost one hundred entries are reviewed by some 400 panellists, who then agree on a shortlist. The shortlisted institutes are requested to answer further questions, which are again rigorously assessed by experts in the different subject areas from all over the UK. In this 13th round, 22 winners were selected.

Another important feature of the Prizes is that they champion free, quality education for all, regardless of your origin, social status, or nationality, showing that through education, anyone can carry out work that has a positive impact on people’s lives. Our group attending the prize-giving that day exemplifies this sentiment, with five women and five men of varying ages, backgrounds, and educational opportunities, and whether we are from Burnley, Bolton, Gravesend, Harrow, Portsmouth or Sheffield in the UK, Cochabamba in Bolivia, North Berwick in Maine, USA, or Kitwe in Zambia, we all came together through education to share in this achievement. 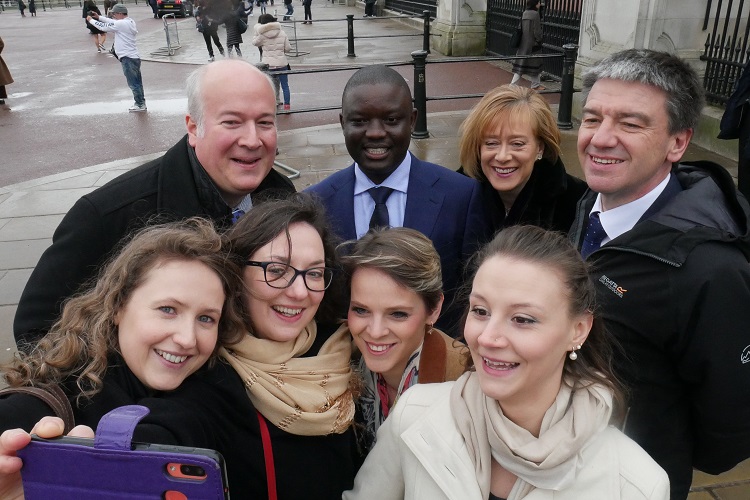 The multicultural make-up of our team is characteristic of NRI’s outlook and echoes the very origins of the University of Greenwich, which began as an educational establishment for working people and today embraces its diverse student body from all backgrounds and walks of life. After the event, we left the Palace in the pouring rain and had to run through the courtyard where we’d so calmly arrived – back down to earth, and headed back to continue our work to generate and share ‘knowledge for a sustainable world’.