Food, the environment and the future: what can we expect?

Is veganism the answer to help us sustain global food production into the future? Does a balanced and healthy diet come from balanced and healthy farming practices? How can we find more sustainable farming solutions and avoid cruelty in agriculture and modern animal husbandry?

Questions like these were considered on Tuesday 20th May at a lively public debate on the future of food and the environment, and the challenges that experts believe may lie ahead. Chaired by NRI’s Professor John Morton, the session was organised by the Faculty of Liberal Arts & Sciences, University of Greenwich and took place at the Old Royal Naval College at Greenwich.

The panel comprised Camilla Berens, a journalist and Greenpeace activist, David Exwood a Sussex crop and livestock farmer and Chair for the National Farmers’ Union south east region, and Will Gildea from the Vegan Society.

Will, who’d encountered a number of transport malfunctions on his way to Greenwich, eventually joined the debate via Skype from home. As a consolation for Will’s frustrating and eventually aborted journey,

Professor Morton invited him to kick off the debate with his views on why veganism was the answer to help us sustain our food production into the future.

Will said he believed that a plant-based diet is better for the environment than other choices. Growing pulses is ecologically friendly, he said, and if we put our efforts into that rather than producing more cows which equals more methane emissions, or more chickens that require large volumes of manufactured food simply to exist, we can simplify the food system and continue to reduce the number of emissions while still feeding the population adequately.

If David Exwood felt defensive at this point, he didn’t let it show. He spoke eloquently about how, as a first-generation farmer, which is unusual in itself, he cares passionately about his beef cattle, sheep and pigs and his 2,500 acres of land. David delved into the history books by mentioning 1816, known as ‘the year without a summer’, when a huge volcanic eruption in Indonesia produced enough ash to block out the sun and plunge the UK, Europe and much of North America into a perma-winter for more than a year.

He told us how the crops failed and people went hungry. David used 1816 as an example of how our food system is not as secure as we like to think and is susceptible to many challenges, some we can foresee, others that take us by surprise. David challenged the Vegan Society’s suggestion that farmers should abandon livestock in favour of growing grains and legumes in pursuit of a plant-based diet for all. “Why would we put all our eggs in one basket like that?” David wondered.

David went on to explain how it’s easy to write cattle out of the equation simply due to the methane issue, but that arable farmers everywhere depend on cow dung which is an essential fertilizer, “it’s the most balanced and nutritious of all. Farming cares”, David continued, “we farmers choose to do what we do.” He ended by saying that in his opinion, a balanced and healthy diet comes from balanced and healthy farming practices. 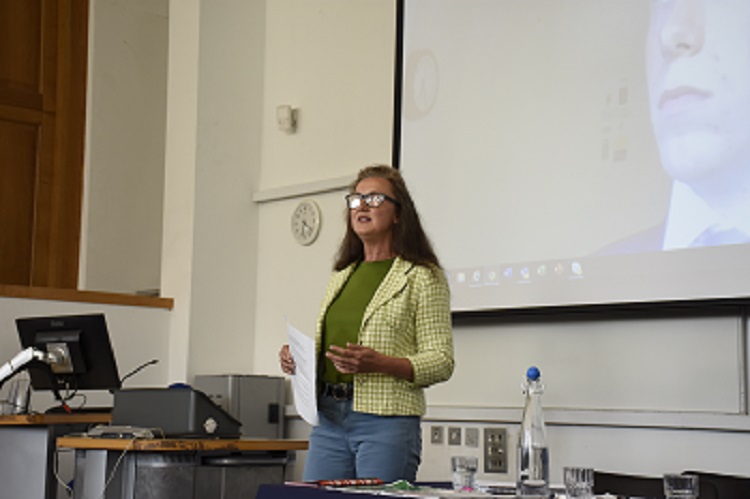 unregulated.” She went on to talk about what Greenpeace saw as a rise in cruelty in agriculture and how modern animal husbandry is a “real concern”. She said: “we need processes to solve the problems. We must engage with the public, the experts and the politicians. We need to carry the farmers through to more sustainable solutions.”

Camilla said there was a definite consumer shift away from eating so much meat, and towards vegetarianism, which she claimed was making an impact, but not fast enough. “We have a decade left”, Camilla said, quoting recent figures from the Intergovernmental Panel on Climate Change (IPCC), “we need people power, grass-roots action to make the politicians listen.”

Professor Morton then opened up the discussion to take questions from the audience which sparked another lively exchange of ideas and observations from the panel. David Exwood defended livestock farming practices and invited anyone who wanted to see a real farm in action, to visit him in Sussex, “any day at any time, there is nothing that goes on that I wouldn’t want any of you to see”. Will Gildea agreed that any changes in farming methods needed to be done sympathetically and that farmers needed to be properly supported to explore diversity and think about growing other, less traditional crops.

Camilla Berens rounded off the question and answer session by saying that what was needed was a “roadmap”, a collaborative effort to decide what we all need to sustain us and how we go about achieving it.

Professor John Morton said after the event: “I was delighted to chair such an interesting and lively debate, between panelists with very different viewpoints but with a common sense of concern for what agriculture is doing to the climate and the environment. I’m sure the audience took away new information and thought-provoking ideas .”

Professor John Morton is an active supervisor of research students within his fields of expertise, and also teaches at Masters and undergraduate level at the Natural Resources Institute, University of Greenwich.