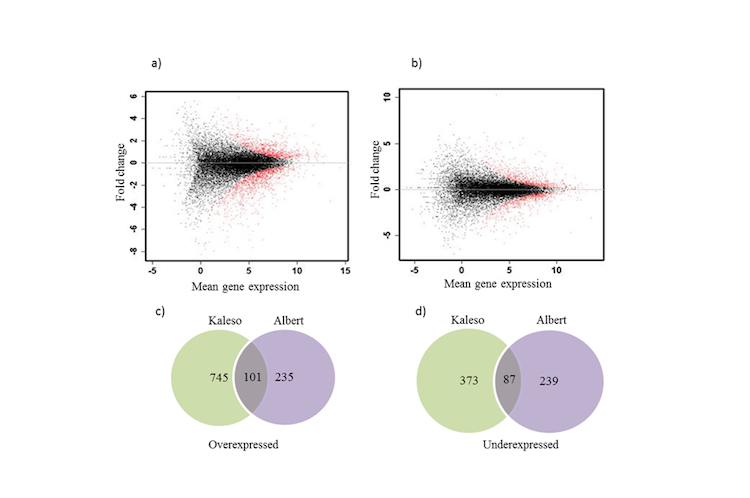 A research article has just been published, the first of its kind, by Maruthi Gowda, Reader in Molecular Plant Pathology at NRI, on identifying resistance of cassava to the Cassava Brown Streak Disease (CBSD).

Cassava is a major food staple for over 700 million people across the tropical and sub-tropical world, but it is severely affected by CBSD. The disease has for many years been recognized as an important disease of cassava in coastal East Africa and the shores of Lake Malawi and Mozambique. More recently the disease is expanding towards central Africa in parts of Uganda, Kenya, Tanzania, Burundi, Rwanda, Congo and South Sudan, affecting the food security of over 40 million poor in the region.

The aim of this study was to identify the level of resistance to CBSD of three cassava varieties, Albert, Kiroba and Kaleso, as well as to understand the mechanism of resistance for providing effective control for the disease.

In this study, an efficient method was developed for screening for CBSD resistance, which involved a combination of virus inoculation by grafting and subsequent virus quantification by a molecular diagnostic technique called real-time polymerase chain reaction. Grafting is a method of introducing a virus by inserting tissue from the diseased plant into the healthy plant.

Upon virus inoculation, Kaleso expressed mild or no disease symptoms and supported low concentrations of viruses, which is a typical characteristic of resistant plants. In comparison, variety Kiroba expressed severe leaf, but milder root symptoms, while variety Albert was susceptible with severe symptoms both on leaves and roots. Virus quantities in Albert were up to 700 times higher than Kaleso.

This approach of virus inoculation by grafting and subsequent virus quantification proved to be highly effective for identifying CBSD resistance, as the symptom severity on plants was directly correlated to virus concentrations. This approach will also help reliably identify the resistance and levels of susceptibility of other cassava varieties so that only resistant lines can be propagated and distributed to farmers.

We further used an advanced molecular biology technique called ribonucleic acid-Sequencing (RNA-Seq) to identify cassava genes contributing to resistance in Kaleso. Our results identified more than 700 genes that expressed in significantly higher quantities in Kaleso in response to infection by cassava brown streak viruses. Some of these genes belonged to certain biochemical pathways of plants such as the synthesis of hormones and secondary metabolites, both of which are linked to disease resistance. A recessive resistant gene and a novel cassava protein, called N-Acetyl Cysteine (NAC)-binding protein, were also found in abundant quantities, which further indicates high resistance of Kaleso to the viruses. Our future plan is to confirm the role of these genes in CBSD resistance so that they can be transferred to farmer-preferred varieties through cassava breeding programmes in Africa.