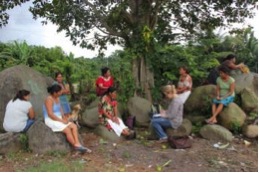 For International Women's Day 2014, NRI would like to draw attention to the critical issue of women's land rights. Women's secure land rights are also important in enabling women to access finance, agricultural inputs and services, along with social status and resilience to hunger and poverty.

However, the majority of women in developing countries lack secure access to and control over land, which increases their vulnerability to dispossession, in case of widowhood, divorce or migration of the husband. Land rights are also negotiated along class, ethnic and family lines where particular social groups, such as youth, orphans, people with HIV/AIDS, often lack secure access and control over land.

Women's land rights were the focus of a project recently evaluated by NRI's Lora Forsythe and Kate Wellard. ActionAid's Women's Right to Land (WRL) Project (2010-2013), funded by the European Commission, aimed to support women from some of the most marginalised communities: indigenous women in Guatemala, Dalit (a name for a group of people regarded as untouchable under the caste system) women in India, and women living with HIV/AIDS in Sierra Leone, to promote and protect their equal rights to land. 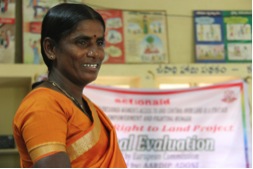 The WRL project was highly innovative as its focus was on specific communities of women with shared oppression, and it worked with the whole advocacy chain, from the training of women leaders, sensitisation of local leaders and men, campaigning at local and national levels, and engagement with policy makers. The project implementation approach, working with long-term partners embedded in social movements, was also found to be very effective.

The evaluation found that the WRL project has been effective in supporting women in achieving their land rights, contributing to improving food security and economic well-being for women and their households. Some of the most profound changes were the increase in social and political capital, as women organised, gained new skills and experience in advocacy activities. There were also examples of attitude and behaviour change among men and local leaders, who would traditionally perceive land issues as being as the responsibility of men. . This change is likely the result of longer-term work of ActionAid and its partners, who will continue to challenge structural gender inequalities in the long term.

Important lessons learned from the project are:

The continued presence and long-term work of ActionAid and their partners indicate that outcomes can be sustained. The approach of encouraging and supporting women in land rights can be replicated in any context, and there is strong potential to scale-up activities to women and other excluded groups. There is evidence that this is already occurring. Overall, the project demonstrates the significant achievement than can be made in land rights and empowerment among women who experience exclusion on multiple levels.

This Land is Our Land (ActionAid video from project countries): http://www.youtube.com/watch?v=UYwjK388Lbw&feature=share&list=UUzsElxx1mkkoSA01jEV7JdA&index=2