Friday 13th might be considered unlucky for some, but it proved to be exceptionally auspicious for two students at the Faculty of Engineering and Science heat of the annual Three Minute Thesis – 3MT – competition. 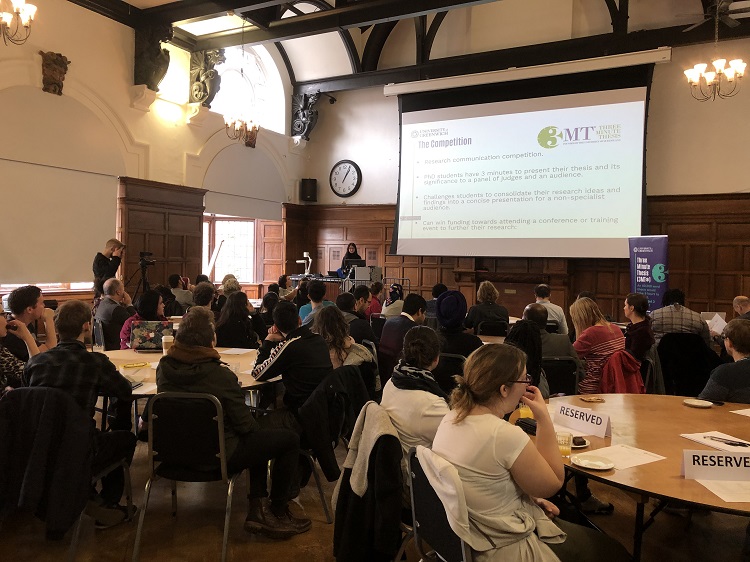 Karifa Sanfo won the Judges’ Choice Award, and NRI’s Gwen Varley won the People’s Choice Award after speaking passionately about her research on improving tools for measuring women’s empowerment in agriculture and nutrition projects in Uganda. Both Karifa and Gwen will now be invited to the university final, with the ultimate victor going through to the national final in September.

Described as a ‘fun and informative’ way of finding out more about the research that is carried out by the university, the competition is always popular and on Friday it was a sold-out event with latecomers having to grab a chair wherever they could. 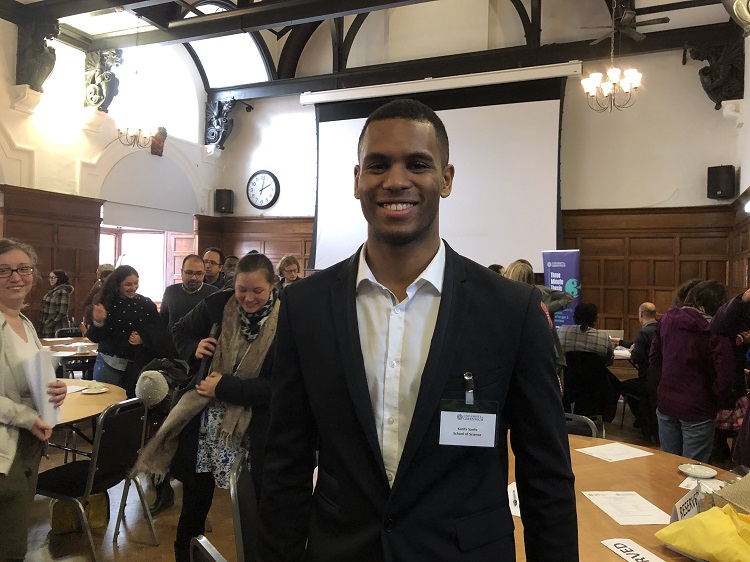 presentation on their research topic and its significance, in just three minutes. The candidates speak without notes and have to keep one eye on the clock to avoid the risk of being disqualified for over-runnng.

The competition is open to all postgraduate research students, and all students and staff are invited to attend the event. It’s billed as an excellent opportunity to meet and get to know members of the research community at the university.

The seven speakers presented varied thesis subjects which ranged from how to tackle the problem of sandstorms in Dubai; exploring how to detect and utilise the unique qualities of the human voice; and the prediction of powder flowability from particle properties. The fickleness of cancer cells and Galectin-9 came under scrutiny as did metabolic ageing in the C.elegans worm and how to modulate it by using genetic knock-out phototherapy and drugs, and the judges’ favourite, Karifa Sanfo’s research into semi-conductors to produce green energy. 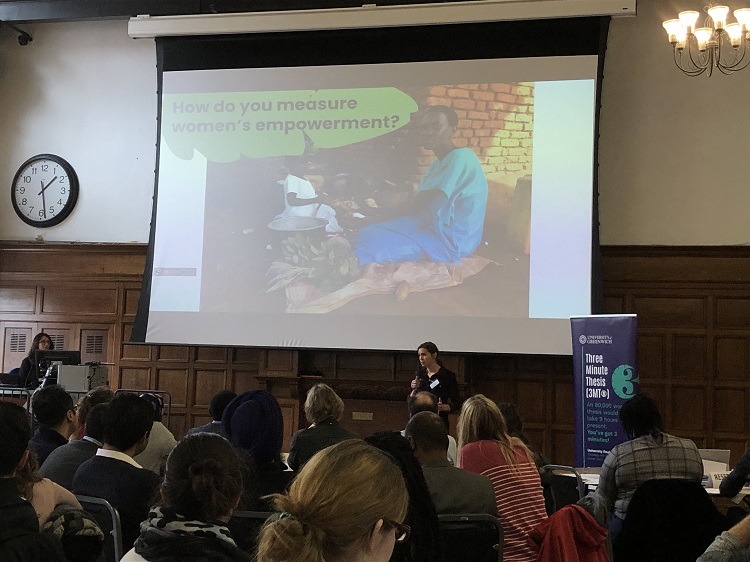 Gwen Varley impressed and engaged the audience, winning the coveted People’s Choice Award with her presentation, asking the question, ‘How do you measure women’s empowerment?’ Gwen briefly outlined her research with women farmers in Uganda who have young children, and the complex relationship between agricultural innovation and nutrition. She posed the question, how do we know if development policy is empowering women? She explained that empowerment boils down to choices and she’d heard over and over again in interviews with these women about all the choices they want to make, but can’t.

Gwen gave the example of a Ugandan woman who farms and makes a good profit from her crop, but, she said, “if the woman’s husband takes the profit from that crop and spends the money on his new third wife, then she’s not empowered, and me coming along and handing her some really good quality seeds to sow, how is that going to help if she’s never seeing the profit for herself?”

Explaining the predicament of not being able or allowed to access contraception to control fertility, Gwen said, “if you’re getting pregnant again with your fourth child when you felt that three were enough, then just making sure you’re breastfeeding correctly is not helpful. Development programmes need better tools for understanding the complexity of women’s lives in order to deliver on their promise of empowerment.”

The audience listened intently to each speaker and rewarded efforts with a rousing round of applause. Immediately after each presentation, votes were cast, the audience using an online instant voting app to give marks for comprehension and content – for example – did the presentation follow a clear and logical sequence and did the speaker spend adequate time on each element of their topic?

Votes were also awarded for engagement and communication – was the presenter careful not to trivialise or generalise their research, and did the oration make the audience want to know more? Speakers were judged on more than just content – the audience had to decide whether they had sufficient stage presence, eye contact and vocal range. Did they maintain a steady pace and have a confident stance?

Two PhD students who took part in last year’s heats said that participating had really helped them to focus on what mattered in their individual research and made them think about how to get it across in a way that was “engaging, impactful and accessible”. They also said that it “crystallised” their thinking and made them focus on the core goals and impact of their presentation in a way that would engage the audience.

Friday’s winners looked exhilarated but relieved that it was over. They were also clearly delighted to have had their summarised research, recognised and rewarded by their peers.