NRI’s historical insect specimen collection: the story of a cabinet

This is not just any cabinet: it contains NRI’s historical insect specimen collection, which Dr Sarah Arnold describes in a new video. 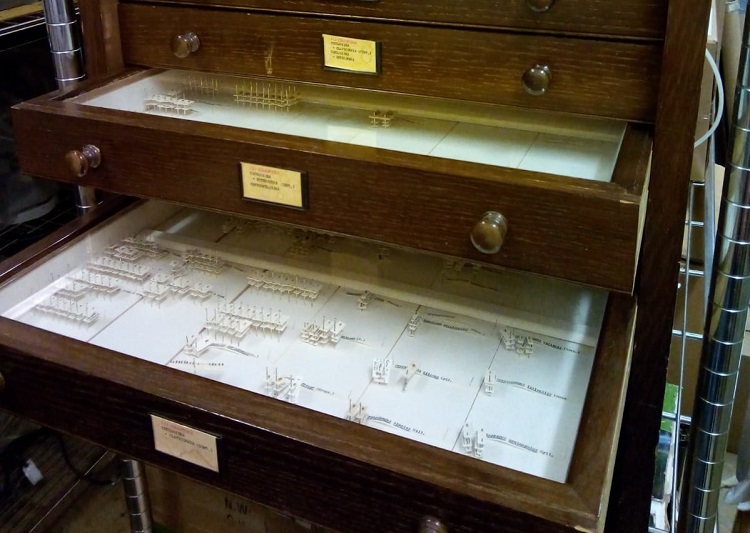 Like NRI and many of our staff, this cabinet has had quite a journey over the years. Through new office moves and reallocation of equipment, the cabinet had been in storage for some time. That’s when NRI’s Evie Keane, who knew the cabinet’s history, stepped in to find it a new home with the NRI entomologists.

Here’s a little of the cabinet’s history:

This cabinet was originally housed at the Tropical Stored Products Centre, part of the Tropical Products Institute (TPI) in Slough, one of several of NRI’s predecessor organisations from around the UK. This is where Evie worked as an Experimental Worker support to scientists until 1990 when the unit relocated to the new home in Chatham, Kent. TPI then became ODNRI, which was then amalgamated with other institutes to eventually become NRI.

Rick Hodges, NRI Visiting Professor of Grain Postharvest Management, who was based at Slough when it was TPI, tells us more:

“They were originally populated with insects collected by Peter Prevett and then added to by other keen entomologists on the Tropical Stored Products Centre staff. Peter did his PhD on bruchids in northern Nigeria and was deputy head of TSPC and then what became the TPI Storage Department. I used the insects in the cabinets for training, especially when we had someone who had a special interest in a particular group of storage pests. The other training aid was of course the insect models which have their own story.”

Learn more from Sarah about how this valuable historical resource is being used today!