My Future in Five – Harrison Lambert

Harrison Lambert studied for his undergraduate degree at NRI and after exploring a few different career avenues, he has just returned to study for his PhD. A life-long lover of the natural world, Harrison wanted a career that combined ecology (the branch of biology that deals with the relations of organisms to one another and to their physical surroundings), agriculture, and helping those in need. He took five minutes out of his day to talk to Communications Officer Linden Kemkaran about why returning to NRI feels like “coming home” and how to him, NRI experts are among the “rock stars of the science world”.

"I originally applied to study biological sciences at the University of Greenwich, but I was offered a place on the integrated Master’s in Biology (MBiol), run jointly by NRI and the University’s School of Science. This introduced me to NRI and its ‘green sciences’ programmes.

I’ve always loved the outdoors and spent most of my childhood roaming around the woods, butterfly catching, collecting grasshoppers and caterpillars, basically whatever I could get my hands on. I’d keep them in my bedroom and watch 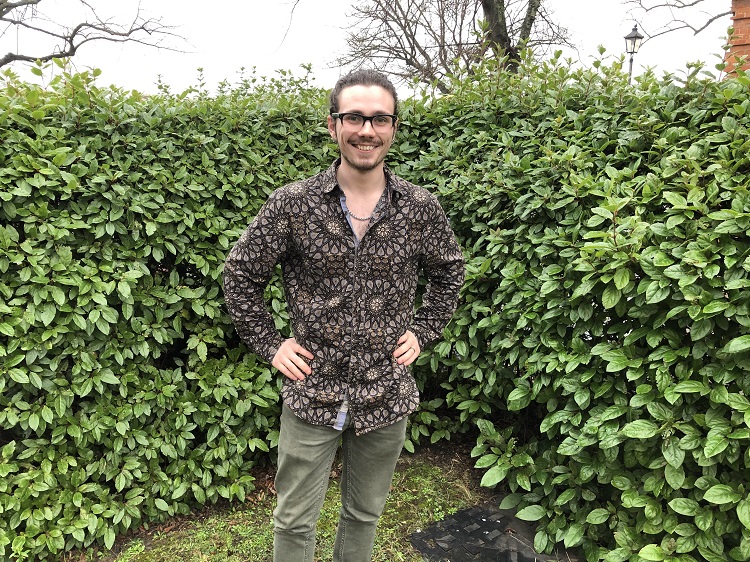 them grow and change, then let them go again. I still keep stick insects at home!

Insects have always been a big part of my life, so I jumped at the chance to study Comparative Physiology (a module on the Biology programmes). A-Levels (further education qualifications in the UK) only really covered human biology and this showed me the different physiology of various animals and insects which I found fascinating. It’s also where I first met my PhD supervisor, Dr Frances Hawkes, when she delivered a lecture that compared general insect physiology to other physiological systems. In my second year I got more choices and I started picking some modules taught by NRI specialists, and then by my third year I was solidly interested in ecology, but also entomology (the study of insects and their relationship to humans, the environment, and other organisms) with a special focus on pests.

After I graduated, I didn’t really know what I wanted to do. I applied to teaching, which is something that I’m still interested in and may go back to in the future, but at the time just didn’t feel right. I also applied to the Copper Rivet distillery in Medway and was offered a job. I saw it as a once-in-a-lifetime chance as it’s a hard industry to get into and I was there for nearly two years working as a distiller. It’s a grain-to-glass distillery and we brewed wheat, barley and rye before distilling them into various products like whisky, gin and vodka. I started a diploma there, but bizarrely once I got good at the job it became less interesting to me. I guess the insects were calling me back!

I still wasn’t really sure what I wanted to do – I thought about doing a PhD, but did not have a specific topic and none of the ones on offer, up until I saw my chosen one, interested me enough. My undergraduate dissertation project focussed upon the host-seeking behaviour of Dermanyssus gallinae, a tiny, red, biting mite that lives on chickens and has significant negative impacts on the poultry industry. The project came to form the preliminary basis of a new PhD project, and it would have been a very natural transition; however, I decided against it mainly because I really disliked working with the mites.

I started attending public lectures at NRI and seeing old friends and faces again. I mentioned that I was looking to do a PhD and received lots of encouragement. And then this amazing opportunity came up to do a PhD looking at the interactions of climate adapted rice agricultural systems, and its subsequent effects on disease vector biology and ecology – or to put it another way– how different forms of rice cultivation in Tanzania, including those adapted to climate change, affect the ecology of mosquitos and their malaria transmission.

Rice cultivation provides the perfect breeding ground for mosquitoes because in rain-flooded paddy fields you’ve got lots of still and shaded water, exactly where the aquatic life-stages of the main malaria-transmitting mosquitoes, Anopheles, want to live. There’s a big push in Africa to grow more rice, as Africa’s production only meets 60% of its domestic rice consumption. But the challenge is to do that in a way that doesn’t increase malaria prevalence in an already high-risk environment.

I should be heading out to Tanzania in late April/early May, and my initial feeling is one of terror in many ways, but also excitement. I’ve never been to Africa, so I do feel incredibly lucky to have this opportunity.

Coming back to NRI felt like coming home. Being surrounded by all these incredibly clever people that have similar ideals to me is great. I like it here, and I like the people here. I grew up in Medway, about five minutes from NRI but I didn’t know of its existence and the fundamentally important work that it does, before studying here. It has such a rich history, and to be able to say that I am part of the organisation makes me quite proud.”