Mark Parnell is a veteran of NRI. He first donned his lab coat in 1990 to work as an invertebrate pathologist, went on to complete the first Masters course in Sustainable Agriculture run by NRI and is now NRI’s Commercial Manager. A childhood dream of being a weatherman almost became reality, but he turned down the Met Office to pursue a career in biological sciences. Mark took five minutes out of his day to Skype with NRI Communications Officer, Linden Kemkaran, about what he’s learnt during his 30 years at NRI and how, if given the opportunity, he wouldn’t change a thing. 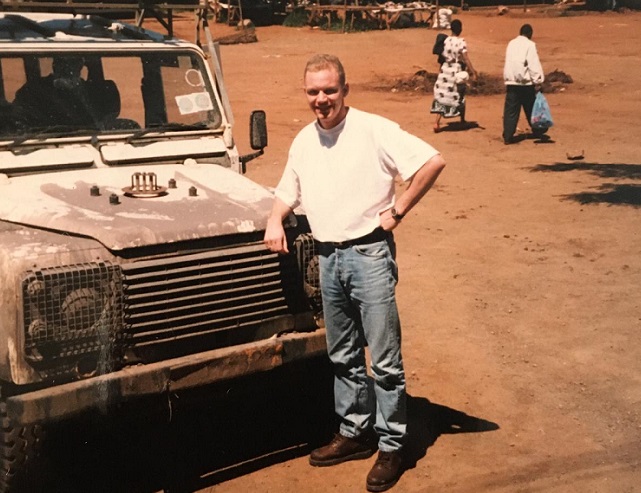 I’ve always loved geography and the weather is one of my main interests. When I left school after my A-Levels, I had two interviews: one was at NRI and the other was with the Meteorological Office and I got offered both jobs pretty much simultaneously. I turned down the Met Office and accepted the NRI offer and I have no regrets.

The Met Office would have posted me to work anywhere, with anyone. Part of the attraction of accepting NRI’s job offer was that I met the team when I came for interview and I knew I’d be based at Chatham and that suited me better at the time. NRI had a global reputation so I was pretty confident that I’d eventually have the opportunity to work abroad.

My first job was Assistant Scientific Officer, looking at how viruses worked and how they affected pests. We were trying to discover the potential of using viruses as biological pesticides which are kinder to the environment and only killed the pests we wanted to control.

This kind of research was exciting as it was very much ahead of its time. One of my first tasks in the lab was to make a tray of insect food out of wheat bran. It wasn’t initially the ‘high-end globe-trotting experience’ that I’d had in mind – cooking wheat to feed caterpillars – but I still found it really interesting.

In 1990, NRI had just moved into its current base in the old Naval dockyard at Chatham and it was a period of massive growth. NRI offered an exciting experimental environment, with the freedom to explore. It was a place that welcomed new ideas and wasn’t afraid to try things out and it provided me with the environment to grow. There were rules and regulations, of course, as we’d been part of the civil service, but the emphasis was on finding new ways to do things.

I had two A-levels in Geography and Biology and when I joined NRI I went to night school to do a year-long foundation course in applied Biology, and following that, an HNC which took two years. Then I was assigned my first overseas trip to Thailand to do field trials on crops. It was the furthest I’d ever travelled; I had to get vaccinations and go up to London to get the anti-malarial tablets. I was given a travel pack which was full of stuff – hypodermic needles, potions, bottles of remedies – things you’d never be allowed to take on a plane now!

My friends all thought it was very exotic; I was 22 and flying alone to these far-off places in the days when it wasn’t the norm – I think it was before gap years had even been invented! The first thing I saw when I left Bangkok airport was 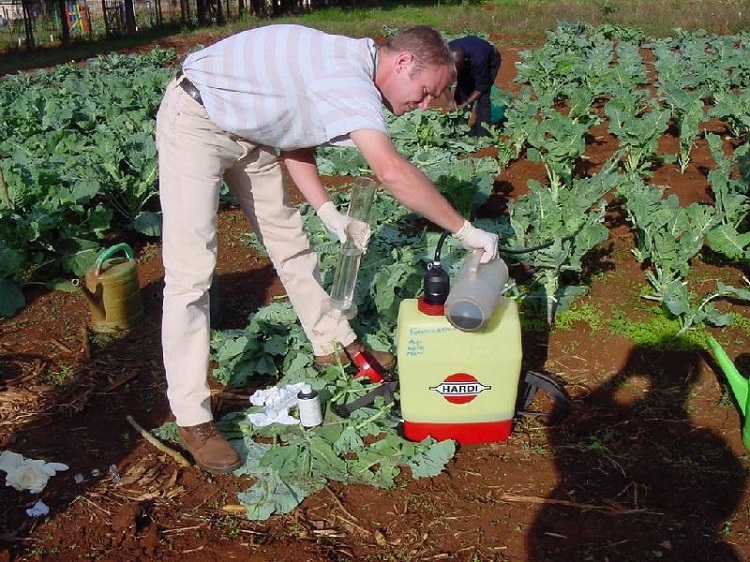 a dog that had been run over, it was completely flattened. It shook me up a bit as until then I’d led quite a sheltered life in Kent. At first, I craved comfort and familiarity, so I searched around for Pizza Hut and McDonalds, but by the end of the trip I was loving all the new food and experiences.

There were some difficult times too. Travelling alone and staying in the same soulless hotel for weeks at a time can be hard. One hotel in Nairobi played the same CD from 6am until midnight, all day every day; you could hear it in every room. I’ll never forget – it was an instrumental version of Toni Braxton’s ‘Unbreak my Heart’ and it did my head in after a while!

I got ill quite a lot; I contracted malaria because the parasites had become resistant to the old-style anti-malarials I’d been taking. I also got giardia, a water-borne parasitic disease, and a dodgy fungal infection in one of my lungs. I had chronic stomach upsets and spent a lot of time in and out of local pharmacies buying various remedies.

But none of this put me off, in fact it whetted my appetite for more travel and I became the Insect Pathology Group’s ‘field guy’. My boss at the time was Dave Grzywacz, NRI Senior Scientist and insect pathologist, who was great, and still is, at helping people climb up the ranks. He encouraged me to take on more work and travel, so I got lots of experience working with different teams and learning from them. It was thanks to Dave's motivation, pushing me forward, that I sat NRI’s first ever MSc.

My boss now is John Linton, NRI’s Commercial Director, who is similarly encouraging and supportive. This approach has definitely rubbed off on me as I now make it my business to help people grow and encourage them to try new stuff. It’s very much the NRI way – give it a go and don’t panic if you make a mistake; learn and grow. Personally I hate making mistakes, don’t get me wrong! But NRI is very much about ideas, experiments and thinking big – it’s something of a cliché to say we think outside the box, but we do.

Someone described my current role – Commercial Manager – as the guy who makes sure NRI doesn’t go bust. That’s pretty accurate! I make sure that the scientists’ hard-won funds are used to satisfy the client, the university and the project leader. These research funds are very hard to get and the trick is to find the balance between all of those requirements that work best for NRI as a whole, without upsetting anyone along the chain too much.

I love what I do, but part of me misses travelling to places like Kenya or Tanzania, scrabbling around in the undergrowth looking for army worms or diamond backed moths. The expertise I gained from my field work now helps me manage the projects as I completely understand what’s involved at all stages of the process. I’ve been at NRI for my entire professional life and I still feel lucky to have had such a varied career within the same organization.

Our challenge in NRI has always been to keep the funding coming in, and that hasn’t changed. We can only do our work if we continue to be the best at what we do. Everyone who works at NRI is motivated to make a difference and improve lives in the developing world; there’s never a shortage of ideas and everyone who works here is naturally driven and has heaps of enthusiasm. NRI needs to adapt as the world changes, but we’re well placed to tackle the issues that are high up the public agenda right now, such as climate change, food security and sustainability; we’ve been doing it for years.

The whole ethos behind NRI is promoting equality and finding ways of placing fewer demands on the world’s resources. Because NRI has so much history – 125 years’ worth – it’s great that others are now thinking along the same lines. It means we still have so much to offer.